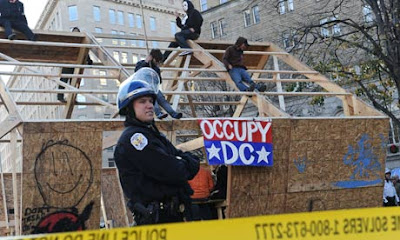 At the conclusion of Quaker Worship yesterday, it was announced, with much dramatic emphasis, that police had surrounded the McPherson Square Occupy DC protesters. Seeking solidarity with the besieged and to make their own voices heard, roughly half the Meeting headed immediately down to the site. I allowed the emotion of the moment to lead me to contemplate particularly dire conclusions. My first thought was that the police presence was now intent on breaking up the demonstration. The lump in my throat was genuine as was my sense of worry.

It turns out that nothing of the sort transpired yesterday. This is why I continue to retain some skepticism regarding the entire Occupy movement. What I observed from instantaneous internet feeds and correspondence with people who were there was very different. For one, police brutality and acts of violence the likes of which have typified other protests was nowhere to be found. The National Park Service, which has jurisdiction over the site, is well-versed in precisely how to perform arrests. This is particularly because DC is the country’s most favored protest spot. Hyperbole aside, this was not Occupy Oakland or the street protests in the UK earlier in the year.

I’m not trying to sound dismissive. People want to be part of a movement. They want to contribute to a cause greater than themselves. These by themselves are laudable goals. But when grandiose intentions become linked to even more irrational and cloying persecution narratives, then that which is produced is ridiculous and comes close to self-parody. Or, let me say it another way. Thirty-one people were arrested yesterday for failing to leave a makeshift plywood structure. Despite the protest’s self-serving spin, that was the whole of the conflict.

The issue does underscore a more significant issue. Occupy DC’s numbers hold steady but do not make significant gains going into the dead of winter. Late December and January are the coldest times of year in Washington, DC. The cold persists through February and usually ends by early March. Although far enough South that snowfall is not especially consistent, DC finds itself regularly on the back end of a Nor’easter or two. Given the right conditions, accumulation can run as high as a foot or more. I can understand why the structure was built. However, Occupy DC is likely going to have to take account for the weather and concede that twenty-four hour occupation may no longer be an option.

And I have other reservations, nagging concerns shared by many. The demographic makeup of McPherson Square’s protesters is quite consistent. They are Caucasian, middle class, educated, often raised in liberal households, and predominately young. Others before me have been critical that people of color and other minorities are not found in larger quantities. Strategies implemented to address this discrepancy have thus far not been enacted. Of course, this problem cannot be laid squarely at the feet of a few hundred people congregated together in a square, living lives of running commentary. Confronting issues of privilege and class would, in my estimation, be worthwhile topics for discussion should Occupy DC wish to gain serious respect. The movement needs legitimacy before others will close ranks behind it.

Instead, what I’ve seen upon other direct visits to the site are nice white kids who generally did what their parents asked and ate their vegetables. Before I seem too critical, I place myself in with that distinction. The Occupy protesters and their devotion to non-violence are touching, as is their ramshackle creative flair. Still, last night I admit I found it hard to take them very seriously. In this era of immediate documented communication, I monitored the situation through regularly updated Tweets and live stream video. After several hours, I concluded that the fears of many, including my own, were much ado about nothing. Occupy will continue. The crisis that never was is over.

What will continue being a point of contention is the matter of long-term camping. The National Park Service has left notes on tents specifying clearly that sleeping on-site is illegal. They seem willing to accommodate almost everything else. Protesters know that they are being tolerated for now and that just being there is illegal. In future, the movement will need to decide next how far they wish to press their luck. If they dig in their heels and seek to construct another structure for a similar function, the cumulative effect might get the entire Occupy DC group kicked out.

The idea of leaderless movements is a compelling one, but I simply do not think we are ready yet as a race of people for it. Quakerism, for example, as a religious group, speaks deliberately against hierarchy. However, leaders still assert themselves, even if they do not adopt formal titles. I am cautious just as they of too much power concentrated in the hands of a few people, the very issue driving Occupy movements across the country. Even so, there is still a vast amount of middle ground between plutocracy and formless anarchy, which the movement would be wise to seriously take under consideration. Commentators, columnists, and others should be equally cautious before they use the movement to further their own ends.
Posted by Comrade Kevin at 9:04 AM