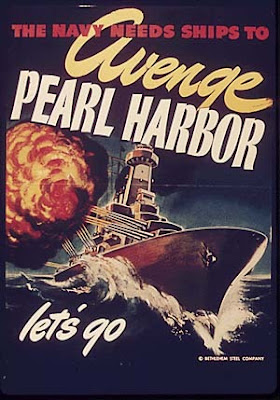 On this anniversary, Japan attacked the United States at Pearl Harbor, Hawaii. Despite my own private reservations, I cannot hear Franklin Roosevelt's eloquent address without being caught up in the moment. At the end of dramatically intoned sentences, the entire room breaks into patriotic, thunderous applause. In direct violation of my own beliefs, I feel a desire to let out a cheer as the short, but powerful speech crescendos. Pacifism in any form now seems out of step and unnecessary.

A day which was observed with solemn reverence for the entire country holds a very different meaning for Friends. Charles Lindbergh and his boy-next-door delivery as spokesman for the Anti-War movement was rendered redundant in an instant. Those who still believed that the United States ought to beware of foreign entanglements now became a small minority. Some, usually stating religious reasons, refused to serve in the military. But they were regularly treated like traitors or turncoats. Some were even thrown into jail. This 2006 article in Friends Journal summarizes a variety of stated offenses and solutions for non-participation. Much of this ignoble aspect of our history is simply not discussed.

Conscientious objectors were often persecuted for their efforts in World War II. John F. Kennedy acknowledged this when he said, "War will exist until that distant day when the conscientious objector enjoys the same reputation and prestige that the warrior does today." World War II COs endured verbal abuse and vandalism of their homes, were refused service in restaurants, had to witness being hung in effigy, dealt with efforts to prevent them from voting, and were socially ostracized.

Conscientious objectors and their families also suffered economically. When the men of the family were in CPS [Civilian Public Service], they were not paid. Many COs went on strike, and some called the workcamps "American Slave Camps." Families relied on the women to provide financial support. Also, families had to pay for COs to go into the CPS (about $35 a month). Finally, there were fewer job opportunities for the family members of COs because most of them would not accept employment that included working in war industries, and some employers refused to hire family members of COs.

Many CO families were separated while family members served in the workcamps or on farms. Some families disagreed with COs and were ashamed of what their relatives believed. In some instances, parents and spouses even threatened to commit suicide. The worry over persecution, loss of pay, and separation took over the lives of many COs' families.

In a different time, enlisting for battle was an automatic action by many. Stories are told of men who, while driving in a car towards some destination, heard of the Pearl Harbor attacks by way of the car radio. Many immediately turned around, regardless of previous plans, and proceeded directly to sign up for military service. An older man I talked with some years ago told fascinating stories. He spoke about how, having turned eighteen, he proudly enlisted for the army. Not only was it expected, it reinforced ideas of acceptable masculine behavior. And, it also made one popular with the girls.

He would later be wounded during the Battle of the Bulge, this during a particularly traumatic and violent German offensive. But that is later. A still isolationist nation had not entertained frequent invasions or a total war, and this is why it rushed to armed combat under the sway of an extensive propaganda machine. It would soon recognize that war wasn't nearly as glamorous as it had been led to believe. Even with technicolor or the support of Hollywood's most popular matinee idols, war was still hell.

The impact of this anniversary has faded with time. Once remembered by all, the number of those who were even alive back then has steadily decreased. Soon, it may be remembered only by history, recorded and passed down by those who were themselves not present. History must inevitably rely upon the reflections of primary sources for any truthful retelling. Still, what makes any momentous event real and tangible are personal narratives. One of my Grandmother's brothers came ashore on D-Day. Due to prior written correspondence with him, she knew he would be there. She never talked about the grandiloquence of that event, just that she cried all day and night, fearful that her brother might be among the casualties. These anecdotes summarize the reality of war, not the speeches, not the pomposity.
Posted by Comrade Kevin at 9:33 AM