Coming out in middle school 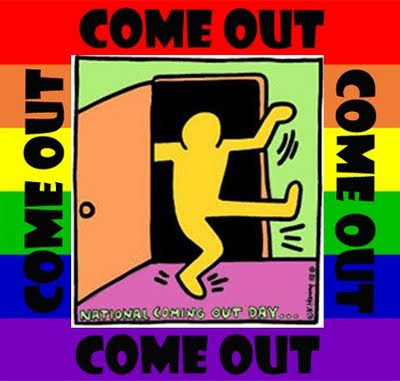 A school district in Utah is defending its decision to report a middle school student's sexual orientation to his parents. The student deliberately self-disclosed his homosexuality during a written activity. He had been open about being gay in other ways, as well. His parents were eventually informed, according to the school district, because of efforts in place to reducing bullying. LGBT groups have gone on record to state that, despite the good intentions of this action, removing anyone's right to out himself or herself is not appropriate. While I favor the view of the latter, I do also understand the motives of the school district.

All of this would have never even been an issue a few short years ago. Though I am now in my early thirties, my experiences were extremely different. It seems almost inconceivable to me that anyone would willingly come out before the end of high school. Where I grew up, at fourteen, LGBT kids might acknowledge the fact within themselves, but never dare to so publicly announce it. In the South, queer culture existed quietly alongside the dominant heterosexual one, always present, but never directly expressed. It would have been seen as a violation of existing social coterie to be that brazenly honest with oneself. Gay people were never to speak or to call attention to themselves as they were.

Among my peers, many had their suspicions early on about a few of their classmates. Sometimes gossip was borne out by fact, when the parties in question came out of the closet. Although inevitable for most, this final step proceeded years later. The more permissive attitudes and freedom present in college usually granted queer kids the confidence to be fully honest with themselves. Those old barriers like constant parental surveillance no longer in place, most opened the closet door wide and left it behind forever. I suppose I always assumed that it was supposed to work this way.

This is why I still have a hard time understanding how anyone would dare to be openly gay in Middle School. Bullying is most intense then, of course, regardless of sexual orientation. And in prior generations, the stigma itself was so intense that coming out was a decision delayed as long as possible.

"Taking away the choice for a LGBT student to come out on their own terms opens the door to significant risks, including harassment at school and family rejection," she said.

Andy Thayer, co-founder of the Gay Liberation Network, said family rejection is a real risk, and some young gay teens have found themselves homeless as a result.

The school "could very well have worsened that situation considerably," he said.

Among a few trusted friends, this at the end of high school, I confessed my bisexuality. But I wasn't anywhere close to emotionally ready to begin to explore that part of myself. In fact, I didn't really explore homosexual relationships and sexuality until my freshman year of college. My parents were left deliberately not informed because I knew they wouldn't approve. Both were openly hostile to the very thought, worried I'd get AIDS or some other gay disease.

My mother had gay friends, but couldn't handle the thought of having a gay child. When I confronted her with who I was she told me that I was only "that way" because I "couldn't get women". These her exact words. It was a ridiculous statement to make since I'd had a few girlfriends by then. But I knew I wasn't speaking to someone in a rational state of mind. Her anxieties and worries had overtaken her judgment, which showed me the source of her intolerance. Fear. I tried to be understanding, but the sting of her words was much too painful.

My father was not much better. He was short-tempered, invalidating, and completely unsympathetic. I was told a story, instead. A very conservative friend of his apparently had a son who was gay. The son had been given, to spare the father's shame, no choice but to move far away. Apparently, the son chose not to do this, instead "flaunting" his "lifestyle choice" in plain view. Accepting and tolerant an anecdote this was not. These statements had almost everything to do with my parents, and nothing to do with me. It was their fears and neuroses that were on display. My side of the story never even merited contemplation.

If I wanted to be treated with basic kindness I knew I'd need to go elsewhere. Though I did not articulate it then, what I wanted was their approval, then a few words of advice. I had to walk a very lonely path myself and searched far and wide seeking guidance. Sometimes I found it, but often I had to learn my lessons alone.

I could have stayed closeted, but I made a conscious decision not to be. The fourteen-year-old Utah student here is extremely lucky. He lives in a time where homophobic bullying is being taken much more seriously. A school district, to say nothing of a society that treats LGBT students as invisible makes no steps to protect them from harm. The news report doesn't indicate one way or another, but I hope his parents have accepted their son as he is. The most important people in his life, their rejection or acceptance will dramatically influence how he sees himself for years and years.
Posted by Comrade Kevin at 8:11 AM