Of Which We Often Lose Sight 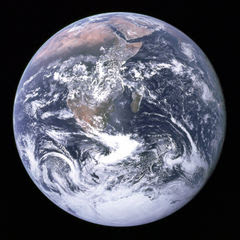 Somewhere in the midst of high gas prices, a President with record low approval rating, an unpopular war, and massive dissatisfaction with the way our country is being run we lose sight of the bigger, underlying issues.
So let us put on the macro glasses for one fast instant and examine a crucial fact.
It is the year 2007. As of this instant, Planet Earth contains an astonishing 7 billion people. Let me spell it out with all the zeros for the sake of emphasis: 7,000,000,000,000. If that wasn't impressive enough, the rate at which this growth is festooning is exponential. It's off the chart.
In 40 years time we shall have 12 and 1/2 billion people on this Earth--each of us squabbling for an ever-increasing dearth of natural and unrenewable resources. Human beings are notoriously selfish beings just by inclination. I don't mean this in any moral sense, but merely a primevial one. We are programmed by God to care first and foremost about our own self-preservation as well as the self-preservation of our immediate offspring.
Thousands of years ago, people realized this and came up with a construct called religion. Religion was perpetuated as a means of control, yes, but it was also perpetuated as a way to counteract human selfishness.
I digress. 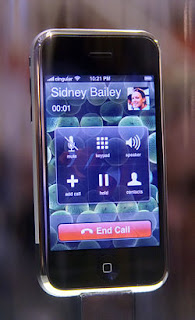 While I agree that this latest Iraq quagmire has led to high energy costs and prices at the pump, what often is not mentioned is that China, Russia, and India have, within a relatively short period of time, rapidly industrialized. Now everyone from Bejing to New Delhi to Moscow wants a car and a television set and an Iphone, and an assortment of consumer goods. They are to blame for high energy costs as well and they will keep energy costs high for the foreseeable future.
The developing world is consuming natural resources at a staggering rate. Countries like India, China, and Russia have begun their own industrial revolutions.
I need not mention to you that we are no longer in an industrial phase of development in the United States. We have transitioned to a service based economy, which puts us in an awkward position of needing other countries' natural resources to drive our selfish desires. Thus, it comes as no surprise to me that we are finding that products from China reaching our shores are not produced with the quality and safety we insist upon in this country.
But I remind you that during our own industrial revolution, during the last half of the 19th Century into the early 20th century, we Americans were guilty of the same sorts of offenses. I remember reading Upton Sinclair's socialist novel The Jungle as a teenager and remarking at how vile and disgusting a practice meat processing was at the turn of the last century. Furthermore, I recall the human and environmental offenses committed at these facilities that would produce open outrage and scandal if they were to occur today.
A popular rhyme of the time read:
Mary had a little lamb
and when she saw it sicken
She shipped it off to Packing-town
And now it's labled "chicken".
There is a theory called transtudio emperii which states that the empires of the world rise and fall with the setting sun. We began in Asia with the Mongols, then came the Greeks, then the vaulted Romans, then we progressed to Europe and the British Empire, and then after World War II America became merely the lastest generation of Empire. Thus, according to this theory, China, India, Russia and the developing nations of the world will be the next empires.
This begs the question: what will we do about this? The burden of this problem falls upon the shoulders of my generation and I hope some enterprising soul will rise to the occasion. We need to understand that whether we believe it or not, we are our brother's keeper and sooner than later we won't be able to deny that fact much longer. Let us resolve to be stewards of the environment. Very shortly what is today someone else's problem will become tomorrow everyone's problem.
Posted by Comrade Kevin at 7:45 PM 1 comment:

Confessions of an Ex-Unitarian Universalist

I have hesitated to post this for quite a while because I do not wish to be thought of as an angry wingnut. God knows there are enough angry wingnuts protesting a variety of causes out of their own sense of bitterness and betrayal.

Indeed, for a time I felt both--but both were inspired by a broken heart. Now as I have progressed through the stages of grief I find myself no long inclined towards Unitarian Universalism.

Two years ago, after the conclusion of a rather tumultuous C*UUYAN con, I was told rather unsubtly that I was wasting my time. These people are the consummate post-modernists and they'll never get it. Out of a combination of stubborness, a trait inherited from my father, as well as idealism, a trait inherited from youth, I persisted.

I feel that this post-modern construct--this philosophy of the disenfranchised that we term Unitarian Universalism is a lost cause. We are, at best, a loose confederation of misfits who have rejected traditional religion. I hasten to even call UUism a faith, a move calculated to both prevent an argument and set forth a point. It has some well-meaning postulates, to be sure, but in spite of the hard work of the well-intentioned, UUism is akin more to a social organization rather than a faith tradition. Even we grinningly blasphemous heathens know where the road to hell is paved.

For years, I took great offense to anyone who dared mention any an all criticism of my chosen crusade, but I have come to the sad conclusion that this is a lost cause. There is too much work to be done and accomplishing it satisfactorily is, I fear, a task akin to untying the Gordian knot.

We rarely agree on much of anything and what we agree on is often not what we hold dear but rather that which we deplore. When Jesus of Nazareth said "love your enemy" he did not mean "love the fact that you have enemies". Too often we are guilty of feeling a compulsion to rail against that which we fear and that which we are not. This has a peculiar way of unifying ourselves together, quite insufficiently. It is my humble opinion that we cannot exist simply as the antithesis of something. We are not anti-matter or negative integers. We know full well what we are not, but when all is said and done, what are we, really?

I see many people who identify themselves as Unitarians first and any other affiliation later. I see many people who limit themselves to friendships and relationships with only other Unitarians. I've seen the suffix UU deliberately adhered to screen names, live journal handles, and above all, senses of identity. It is if we are saying that only other Unitarians are fit for our interest and though we share much in common, this sort of identity is akin to a cult and not to a faith tradition.

After all, in the Christian community, I do not see people who limit themselves to interactions with only other Methodists, Baptists, Presbyterians, Episcopalians, Lutherans, and the like. I do not see evidence of this in Buddhism.

However, I do see evidence of this in Islam, Catholicism, Judiasm, Mormonism, Church of God, Penecostal, and other forms of Fundamentalist Christianity.

Furthermore, we leave ourselves easy targets for the butt-end of Garrison Keiler's numerous jokes because we seek a sort of Utopia on earth. Anyone who has lived for some degree of time on earth knows that the constant of humanity is its messiness. It is imperfect; it will be imperfect; it shall be imperfect. Expecting less is expecting the impossible. As Keiler himself put it, Unitarians don't want Rapture, they want closure.

My other deep criticism is of the way we treat newcomers to our gathering. Rather than surrounding each other with love and attempting to be on our own best behavior (no matter how hypocritical this is in reality), we instead insist all newcomers must prove themselves worthy of our attention. This country club mentality is prevalent in life. I, for one, am looking for a break from it in religious fellowship. Common courtesy, a welcoming attitude towards visitors, and the occasional get-well card in the mail are friendly gestures that are sadly lacking in our little tribe of hyper-individualists. And in this very hyper-individualism we lose sight of the fact that faith groups exist as loving communities rather than as competitive fraternities. If the world is competitive, rough around the edges, and often mean-spirited, then these are the last things I want on Sunday morning.

Surely I am not telling you all anything you are not inundated with from the pulpits of your own home congregation. We have identified the problem well. The question remains: why haven't things changed? Have we opened ourselves up to the possibility that they merely cannot?

I speak only on behalf of myself and speak not out of malice. There are, and let me underscore this--many courageous, idealistic, brilliant souls out there who I know will continue to fight the good fight. I am merely the latest to realize that the quantum leap UUism needs cannot accomplished because of its formulation. It is fundamentally flawed and cannot be redeemed by a combination of masterful rhetoric, constant reminders, good intentions, and eloquent prose. If it is to survive as more than a small niche group of often radical leftists, it must take on precepts other than the highly nebulous, highly abstract principles that serve as guilt window dressing full, as Shakespeare noted, of sound and fury, signifying nothing.

I feel as though I have hit my head against a brick wall for nine years and accomplished absolutely nothing in the process. To show for my efforts, I have only a broken heart and two nervous breakdowns.

I believed once--I honestly did. But those days are through and I have found solace in Christianity. When we detached ourselves from that great religion we did a grave disservice to all of us who bear the chalice. When we detached ourselves from concrete realities (yes, even dogmas) only to leave behind the flimsiest of abstract principles we began to wither away to nothingness.

Read this as only my heartfelt opinion. In true Unitarian fashion I seek only to state how I feel, not convert or change minds.

I recognize I am not the first person to come to this conclusion, nor will I be the last. For those of you who will, in your own way, carry on the crusade, I wish you luck though I feel that at some point in the future you too may reach the same impasse that I have.

In love and peace,