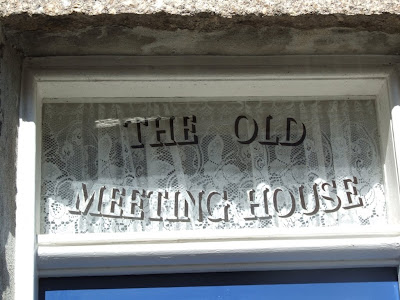 Periodically, I write open letters to my Meeting on its listserve. This particular correspondence was sparked by an article I read in a monthly Quaker periodical. In the beginning, Friends did not celebrate Christmas, believing it to be a tradition foist upon them, and one in contradiction to their beliefs. They faced fines for daring to keep their shops open on Christmas Day. Vandals sometimes broke windows and damaged Quaker-owned businesses. Friends believed that Christmas was a festival of unrestrained frivolity and drunkenness, which is a large reason why they didn't celebrate it.

The non-observance of the Christmas holiday persisted until around the time of the Civil War and is held today only by a few.
For the sake of greater comprehension, I'll identify some esoteric references. FUM stands for Friends United Meeting, a Quaker organization based in Richmond, Indiana, which is solidly Christian. First Day is Sunday. Early Friends replaced the names of days of the week, this because their original names were said to be Pagan in origin. For example, Wednesday is Fourth Day and Friday is Sixth Day. A query is an open-ended, often rhetorical question posed to everyone. It is meant to facilitate contemplation and deepen spiritual understanding.

The latest edition of Quaker Life magazine has arrived in my inbox. One section, mostly in jest, asks us how we might choose to celebrate (or not celebrate) Christmas. Or, as it was known to earlier Friends, "that day called Christmas". I imagine the phrase being pronounced with a particular emphasis on sharp, unyielding disdain. We are, after all, descendants of Puritans.

As I've understood it, Friends do not celebrate holidays, at least during Meeting for Worship. I've been told that this is because Quakers believe that no First Day is any more or any less special or holy. The Christian holidays and resulting color schemes of my boyhood are nowhere to be seen. I still sometimes half expect us to be celebrating Advent right now. But if we are to be in this world, not of this world, we may have made an exception for Christmas. I think it a good idea to contemplate the rampant consumerism omnipresent to the holiday. It has recently showed itself in the behavior of some overzealous shoppers on Black Friday.

Friends paid quite a price once upon a time for their lack of observance. This was true both monetarily and otherwise. Should we return to those days, much to the disappointment of children and the uncomprehending stares of friends and coworkers? Quaker Life, the FUM publication it is, encourages us to remember whose day the 25th of December really is. And they don't mean Santa Claus. Though Christmas Day may not be the precise, historical twenty-four hour period that Jesus of Nazareth was born, I still think it necessary to commemorate his life and his ministry. The man hasn't exactly had a moderate impact throughout the course of history and throughout the world even today.

Friends may differ in how they view Jesus and I respect their beliefs. At minimum, I hope we recognize that this day of observance, Quakerly or not, has a meaning beyond the mad dash to accumulate more things, more stuff. In an ideal world, our reverence would fall equally upon every calendar day. If there are truly no need for holidays, then we see no difference between the sacred and the prosaic. But how we love Christmas and how we conform to its unstated rules! The negative is commingled along with the positive, as is so often the case in human expression. We may always feel the nagging urge to commemorate particular days for particular events. We may not be quite evolved enough to avoid reaching for this distinction.

In writing this, I have no view to advance, no ax to grind. My intention is to get people thinking, much like an effective query. Why are we officially against ritual though we find that ritual seeks to assert itself anyway? Why would we have no day be more or less reverent than others, while acknowledging that this is not a desire quite so easy to follow? Like many faith groups, we were established based on idealistic standards of purity. Yet we are still human and still possessed of shortcomings. I hope then that we might take account for our flaws as we hold ourselves to a higher standard. The Christmas season is supposed to remind us that goodwill, kindness, and cooperation are more important than selfishness. If holidays must persist, I can think of no better message to be reinforced, year in and year out.

Kevin.
Posted by Comrade Kevin at 8:57 AM