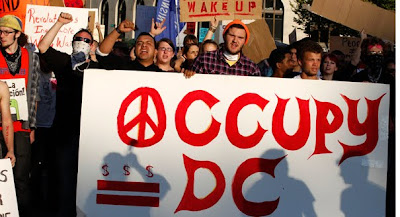 Yesterday, in the evening, a group of Spiritual/Religious Progressives met at All Soul's Unitarian Church to discuss their involvement in the Occupy DC movement. I regret to say that instead of common purpose, there was factionalism, rivalry, condescension, and a lack of willingness to respect the beliefs of others. As a proud liberal, I am embarrassed that all of our worst qualities were on display last night. And as a believer in basic solidarity, I am enraged that a single group acted as though it was the only one worth anyone's support or attention.

The issue at hand here begins with the basic makeup of both groups. Stop the Machine is comprised almost exclusively of Baby Boomers and former Vietnam War protesters. Its focus is exclusively anti-war in nature. The structure of the group is very hierarchical and top-down. Unlike the Occupy movements currently in major U.S. cities, its occupation of Freedom Plaza had been planned for months. Stop the Machine has rather tenuously shared the spotlight with the McPherson Square group for most of a month. Even so, tensions have long existed, especially if tentative plans are ever made to consider combining forces. Last night, the Stop the Machine representatives barely allowed those from Occupy DC to get a word in edgewise.

If Stop the Machine had been willing to peacefully co-exist with Occupy DC, then there would have been no problem. However, its leadership has been openly contemptuous of the more democratic method Occupy DC upon which is predicated. With their derision is a strong skepticism, doubting that a bunch of disorganized kids could ever plausibly put a movement together. They forget, however, that their own parents said the very same thing to them once upon a time. The first thing to go with self-righteousness is always irony. To these self-important activists, the world revolves around Stop the Machine, and they have no concern for anyone or anything else.

Occupy DC is much younger and came to life more or less spontaneously. It has regrettably been made to feel like a bit of a red-headed stepchild, since Freedom Plaza is better able to publicize itself in terms that the media understands and can use. Occupy DC focuses more on economic injustice than on war, so the two have always had a separate message for the most part. But what really makes me upset is how Stop the Machine has poached aspects of Occupy DC when to its advantage. Stop the Machine, as I noted, wishes to be seen as a separate group with a separate name. But it still nonetheless recently purchased the domain name occupywashingtondc.org, which directs visitors to its own website.

Problems caused by the decentralization of progressive groups were also evident. Liberal faith groups love the idea of interfaith gatherings, not understanding that being respectful of the beliefs of others means you must do your homework first. The Network for Spiritual Progressives representatives routinely used language that was offensive and not pertinent to certain faith groups. For example, the term "clergy" is not an umbrella term meaning all faith leaders. It is instead a mainstream Christian term that leaves out Jews, Muslims, and even some other Christian groups.

It was even proposed that ministers or preachers intending to lend their vocal gifts should provide a script beforehand, so that their messages could be reviewed. In addition to being censorship, this act would have invalidated the basic premise of unprogrammed Quaker vocal ministry, which is meant to be given spontaneously. It would have also limited those who often preach extemporaneously. But aside from compromising individual beliefs, judging what was acceptable and unacceptable would have become the purview of a nebulous board of review. God knows who or what that would have been.

What lies before us in Washington, DC, are powerful lessons. We must avoid these kinds of prideful mistakes if the Occupy movement is to thrive. As it stands now, what exist are two factions. One seeks to suck up all the oxygen to suit its own selfish purpose. Another feels betrayed and fights to stay in the limelight. Both could be unified and be more powerful together than separate, but human selfishness has instead intervened. We cannot let consumerism and narcissism enter, because the instant they do, we have lost. We might as well fold up our tents and go home. Working together in common spirit with other people is the only way. We know what will not work. Imagine what could be accomplished with the right attitude.

Posted by Comrade Kevin at 1:36 PM

I am so happy to hear someone else shares my concerns with the freedom plaza encampment, old dog protesters who don’t really understand the new ways this movement is intended to work.