A Native's View of the Alabama Immigration Law 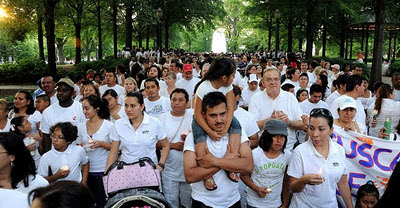 With a draconian anti-immigration bill now the law of the land in Alabama, news reports have noted that Latinos have begun leaving the state. I recall when they first arrived, now close to fifteen years ago. Migrant Hispanic day laborers began to pour into Hoover, Alabama, specifically because of the housing boom then chugging along at breakneck pace. The city annexed more and more land, much of which was zoned for residential development. Cookie-cutter suburban homes sprang up overnight, in no small part to the willingness of a certain minority group to do the backbreaking labor. Digging foundations and sewer lines, among other tasks, was filthy, dangerous work, and a few even perished from the endeavor. But it still paid more than back home in Mexico, so they kept arriving, wave after wave.

Apartments were affordable in the oldest part of town, along Lorna Road. Sometimes whole families would inhabit a space that had been originally designed for two people alone. And with time, a thriving business district appeared, one where Spanish was the dominant language and the culture one observed was very different from that of the Deep South. Still, its residents and the businesses kept their distance from the rest of us and rarely interacted, except on the job. This was no melting pot, assuming we even believe in such things anymore. We lived fully separate lives.

But in matters where crossing paths was unavoidable, challenges appeared rather quickly. Many of them involved public school education. Boys and girls who could barely speak English could obviously not yet read at grade level. This necessitated the hire of scores of English as a Second Language (ESL) teachers. And, not only were these children deficit in their adopted tongue, they were also below grade level in Spanish. Rural areas of Mexico suffered from the same lack of basic resources as in any other developing country. What may not surprise you is that No Child Left Behind doesn't take this circumstance into account. The school system failed to meet a progress goal, which became the only excuse needed to get rid of a strong Superintendent who would not acquiesce to a controlling City Council.

By now, anti-immigrant settlement was at its apex. Familiar bigoted phrases were heard. The Hispanics were taking jobs away, they were taxing the resources of the city, and they were avoiding paying taxes. A resource center that directed immigrants to needed job tasks among other services had its funding rescinded for reasons based more in prejudice than in money. Long-time residents darkly complained about "illegals" without car insurance who created traffic accidents then fled the scene without making payment arrangements. Other griped about Latinos who had no health insurance and drove up health care premiums for everyone by defaulting on the Emergency Room charges. Naturally, no one talked about the ridiculous and steadily increasing cost of health care in general, but that would have only pointed out the complexity of the problem.

All of this was a microcosm of what was happening throughout the entire state of Alabama, if not the South. Migrant workers found employment in unglamorous places like chicken processing plants, which were eventually raided when it was learned that basic greed drove hiring practices. These workers fully expected to be discovered and have to uproot eventually, turning whole areas into ghost towns. This unfortunate scenario may happen again after the passage of this offending bill, which has survived already one major court challenge. In relatively good economic times, migrant labor is much less of an issue. But today, with persistent unemployment and an economy unlikely to rebound quickly, anything that might be thought to stand in the way will be targeted.

Nevermind that the average Caucasian wouldn't be caught dead doing backbreaking labor for minimal pay. This is a more "civilized" form of conflict, or perhaps an avoidant one. There have been no widespread instances of violence around this issue. Instead, one finds gritted teeth and resentment. The migrants have their advocates and allies, but no voice has emerged among them as their champion, their spokesperson. They arrived quietly and will depart quietly. And behind they will leave a cultural richness that stretches well beyond an improvement in Mexican cuisine in local restaurants. That is the saddest revelation of all. No one seems willing to see it, but humanity has often cut off its nose to spite its face.
Posted by Comrade Kevin at 8:51 AM