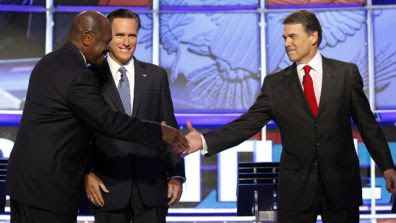 I have to admit that I have only been paying attention to the Republican Presidential debates with half an eye. It is, to my reckoning, impossible to take any of the candidates seriously. They are more like caricatures than anything else, trotting out gimmicks like 9-9-9 or grandstanding about Ponzi schemes. Mostly I am completely disgusted by the way that taxes have become a distracting fetish in the broader discourse. Each candidate could choose to focus on a broad range of issues, thereby winning the trust and likely the votes of the American people, but they instead focus on simplistic answers for complex problems. I suppose if you don't have a solid offense, you've got to rely on trick plays.

A parable of Jesus follows below. It concerns, literally, the paying of tax even when it is unnecessary. However, as you will see, to resort to a one sentence description of a complex story is unfair.

After Jesus and his disciples arrived in Capernaum, the collectors of the two-drachma tax came to Peter and asked, "Doesn't your teacher pay the temple tax?" He answered, "Yes." When Peter went home, Jesus spoke to him first, saying, "What do you think, Simon? From whom do kings on the earth collect tolls or tributes? From their own subjects, or from foreigners?" When he said, "From foreigners," Jesus said to him, "In that case, the subjects are exempt.

However, so that we don't offend them, go to the sea and throw in a hook. Take the first fish that comes up, open its mouth, and you will find a coin. Take it and give it to them for me and you."

In those days, all Jewish men were required to pay a temple toll. This was a modest tax that was specifically earmarked to maintain their holy place of worship. The tax collectors imply directly through their questioning that Jesus is less devout if he has not contributed his fair share. In other words, his reputation is at stake. Peter speaks before he knows the correct answer, making himself look foolish in the process. But those of you who know anything about Peter recognize that this is nothing unusual for him.

As is common during any period of intense polarization, militarization, and dissatisfaction, the challenge of the tax collectors was viewed first through the lens of occupation. The cursed Romans had control of Judea, severely limiting Jewish self-government. Peter, in his answer, returns to the subject of the vastly unpopular taxes levied by Rome to fund its empire. Who do kings go to when seeking revenue? The foreigners they occupy, of course. We could all be foreigners now, by that definition. Of course, we alone determine who are the good guys and the bad guys. Everyone's got a different set of criteria to establish friend from foe.

'Then', argued Jesus, 'ought we to be paying a tax to God in heaven? Does not the acceptance of such a burden imply that whoever pays it is really a stranger from God, a foreigner, from His point of view? But you and I, Peter, we belong to God's family. What need is there for us to pay atonement money?' So Jesus and Peter could regard themselves as already atoned for!

And then, whilst Peter still groped after his Master's meaning, Jesus swung the other way. There must be no stumbling-block to hinder either rulers or people from believing in Jesus. Therefore, although a proper assessment of the situation required nothing of the kind, the payment had better be made. If word went round that Jesus or his disciples refused to pay this temple poll-tax-and with what malevolent satisfaction the Jewish leaders would help such a report on its way! - there would be such a reaction from national and religious prejudice as to make any further progress in the mission of Jesus altogether impossible. So, as a concession to the spiritual immaturity of the nation, the half-shekel was paid.

This parable is partially concerned with the compromises and concessions we must sometimes make. People are often obsessed with small gestures that, when followed, are supposed to prove both loyalty and purity. Though they are largely inconsequential, people place enough stock in their observation that is worth following suit rather than refusing based on strict principle. Unable to make a difference in a broader way, small responsibilities give people a sense of desired authority. So it is true here with this temple tax. Jesus concedes the spiritual immaturity of many believers, recognizing that much work remains.

The Republican Presidential candidates have all acknowledged that they must put forward a tax policy, regardless of how ridiculous and one-track it is. In some respect, this is nothing new. In 1996, Steve Forbes rode his single issue campaign of a flat tax longer than most would have expected. The most Republican of all litmus tests now revolves around decreased taxation of one form or another. Whether this is truly feasible in an economy nowhere near health and financial solvency remains to be seen. Taxation is probably a necessity, and those expected to shoulder the load are likely both subjects and foreigners.
Posted by Comrade Kevin at 9:05 AM