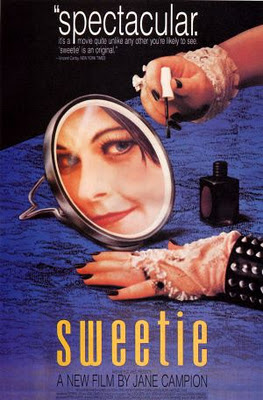 New Zealand director Jane Campion’s debut 1989 film Sweetie is a portrayal of a slowly imploding dysfunctional family. Along with two sputtering relationships are the hijinks of mentally ill daughter Dawn, whose nickname doubles as the title. The more conventional sister, Kay, is as buttoned up and emotionally remote as her sister is impulsive and unrestrained. In the movie’s first half, the screenplay provides no answers to Kay’s repressed character. It is only after the introduction of her black sheep sibling that we begin to feel the sympathy that comes from honest understanding. But it is only through what we observe that this occurs; Kay never seems to care whether we or anyone else likes her or hates her.

It is, in fact, difficult to easily relate or feel favor for any character, male or female, young or old. Kay’s distant behavior endears her to almost no one at her job, which leaves her exposed to a lot of workplace teasing. Her meditating, Buddhist, attractive boyfriend Louis recognizes over time that the two of them are a terrible match. Only a year after they moved in together, she has retreated to a separate bedroom and shows no interest in sex. Shortly before, she managed to win his hand away from one of her co-workers, after he had been previously engaged to someone else for all of an hour. Her sister Dawn/Sweetie has consistently wound the rest of the family around her little finger over the years, resorting to childish tirades to win attention, approval, and her own way. The two long-suffering parents are having their own problems, which could be as a result of being their daughter’s perpetual caretaker. Discerning motives is challenging because they are never plainly spelled out.

As someone with a similar disability, the film’s depiction of Sweetie made me very uncomfortable. It wasn’t because I thought the artist’s rendition was unfair or unrealistic, but rather that I have encountered people similar to her in my own life. Mental illness can best be explained as a spectrum disorder, with extremely varied diagnoses, presentations, and intensity of symptoms. In most psychiatric hospitals, however, patients are grouped together in one or two units, regardless of specific ailment or severity of illness. I have known people like Sweetie, and found it equally difficult to not let my frustrations taint my perception of them. Some people, sadly, use their illness as a means to obtain what they want, entirely as a means of manipulation. Sweetie has made a conscious decision to not act in her own best interest, and based on the family’s response, this is a regular pattern for her.

What is difficult to discern is the role of the father. Is he a delusional enabler, an incurable optimist, a man unable to view his wayward child beyond fond memories of her as a girl? Or, does something darker exist between a daughter and her biggest champion? Some reviewers have suggested the two may carry on a discreet incestuous relationship, one consigned to the shadows. While this theory would not seem out of order in a film of this nature, neither it is for certain. Sweetie’s father may simply, like many parents, be unwilling to entertain the notion that his daughter has significant limitations. Acknowledging Dawn’s flaws might force him to contemplate his own mistakes in parenting.

By the end of the film, a somewhat meandering journey by the entire cast ends in catastrophe. It is not an entirely unforeseen conclusion, mind you, since patience has worn thin with Sweetie ever since she arrived on the scene. Part of the film’s overall theme involves the mystery of fate and destiny and humanity’s inability to make sense of it. Kay consults a psychic early in the film to provide her some assured insight regarding the future. The mystic literally reads tea leaves to make her predictions, with decidedly mixed results. It is a visit to this clairvoyant that bookends the beginning and the end. An otherwise hyper-rational human being like Kay would never be thought to trust in something so improvable, but her veneer of fastidious control shows cracks in the foundation. Her personality may be a well-practiced poker face. It is those who feel they have the most to lose who must seek to control the present and what is later to come. And in short, they are afraid.

Posted by Comrade Kevin at 7:56 PM