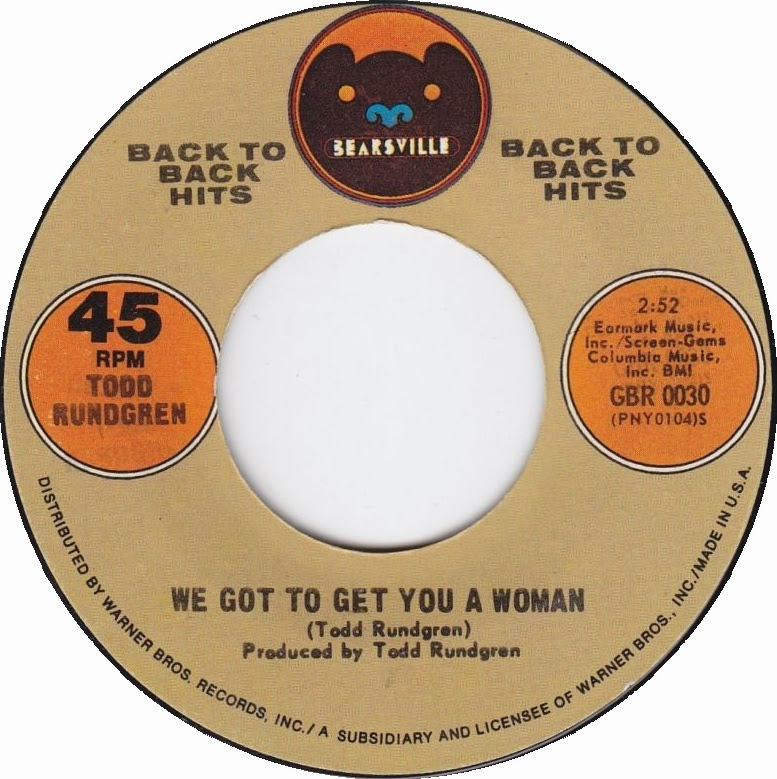 The second-wave heyday of Feminism arrived in the early 1970’s. The movement regularly and directly criticized, even attacked elements of pop culture. One such facet involved scrutinizing the lyrics of popular songs, songs usually written by men. It is a tradition still kept today, one which has produced more than a few successful protests over the years. Here is one such example of those days.

The pop balladeer Todd Rundgren released his first hit song in 1970. Entitled “We Gotta Get You a Woman”, its narrator seeks to find a girlfriend for a lost and lonely male friend. The lyrics reveal nothing terribly upsetting at first. Perhaps it’s a bit condescending in sections, but the final verse made many see red.

Talkin’ bout about that special one
They may be stupid, but they sure are fun
I’ll give it to you while we’re on the run

Feminist response was immediate and scathing. It was so intense that Rundgren wrote a song response a year later, one that mainly sought to laugh off the issue. He cryptically titled it “Chain Letter”.

Don’t take yourself too seriously
There are precious few things worth hating nowadays,
And none of them are me

The implication being, as always, that feminists were devoid of perspective. He questions their anger, thinking perhaps intense hatred would be an emotion better spent on others. Defending himself, he states that he was merely trying to copy the attitudes and dialogue of a previous generation, or perhaps a younger self. Furthermore, he concludes that feminists are looking to be in the public eye and to be ultimately immortalized in history, just the same as he is. To Rundgren, everyone involved is playing an elaborate game to win popular attention and be enshrined forevermore in memory.

Still, Rundgren did at least learn his lesson. Possessed of a sometimes juvenile sense of humor, he made sure to avoid similar subjects in subsequent albums. Artists who also raised hackles included the Canadian singer-songwriter Neil Young, whose song “A Man Needs a Maid” won him no favors. The lyrics do not imply that his partner ought to be a maid, but instead that all any man really needs is hired help to cook meals and iron shirts. Young was equally nonplussed by the criticism, but did not respond to it in the form of a song. Like Rundgren, he made an effort for a time to write lyrics that did not involve the interplay between men and women. Still, he was not above occasionally penning cranky rants at ex-wives.

Since then, popular music has taken a different direction. Most Feminist derision has of late fallen primarily on hip-hop, where misogynist attitudes are especially blatant and sadly prevalent. The lyrical content of a previous age seems quaint by contrast. And in the meantime, can it be said that with time offensive content has increased dramatically, or are we just passing through another musical stage? We redouble our efforts on one particular genre of late, but one wonders if there are other forms that need to be examined. Sometimes the effort itself is exhausting. With every problematic song, two more appear alongside it. In another generation, who will draw our fire and spark our ire, or will we ever conquer this problem once and for all?