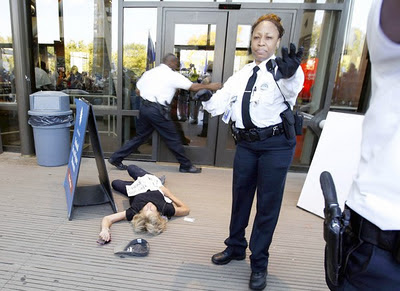 Liberals are eager for the recent Occupy Wall Street protests to be the harbinger of a greater trend. This is not surprising, since the Left’s ability to inspire massive participation has dimmed considerably in the years since Vietnam. A highly organized, highly coordinated system of street demonstrations, all centered around a core group of issues, devolved by the 1970’s into a means of expressing almost exclusively individual grievances. Or, protesting became relegated to certain specific groups or causes that pushed agitation. Participation on a grand scale morphed into protest culture, a small subculture of progressives with their own peculiarities, often the only sorts of people who can be reliably counted on to show up.
What I observed personally over the weekend more or less fell into the same category. These movements, if one can now feasibly call them that now, were isolated clusters of demonstrators, no more than a couple hundred at a time. At least two existed simultaneously on Saturday. One, Occupy DC, were noisy but unthreatening, with participants bearing signs on the subject of a multitude of causes both great and small. Another, Stop The Machine, was a bit more militant. Its members, protesting the War in Afghanistan, set up shop next to the Smithsonian’s popular Air and Space Museum. It was their intention to speak out against the display of drone aircraft inside, the likes of which have been used frequently by US troops in the conflict.
Stop the Machine’s protest involved actually entering the museum to make a public statement, which managed to get a few activists effectively pepper sprayed and at least one arrested. According to the museum’s account, a security guard was rather aggressively shoved by those seeking to force their way past the doors. Non-violent this is not. I arrived shortly after this happened, observing four to five DC police cars rushing forward ahead of me. If it was the intention of the few hundred people who remained to shut the entire museum down for the rest of the day, I can say they succeeded. However, I am told on Sunday it was promptly reopened.
Twitter feed hostilities between the two groups occasionally flared, some believing the mace attack was senseless. They posted dramatically introduced cell phone camera accounts of what transpired. Others thought the entire concept was incredibly stupid and counter-productive. News reports vary, and it seems to be difficult to know where one group ended and another began. Allegiances were muddled. Which is part of the problem.
A pacifist myself, my sympathies do lie with these protests. But I know that unless a coherent message coalesces with the leadership to follow, these gatherings of the righteously indignant will stay small and never be much more than a curiosity to the media and American people alike. Those who provide boots on the group must also be highly disciplined, not the sort of people who lose their cool when things get heated, if one account is to be believed. The same crunchy hippies or highly motivated, politically informed activists that make up protest culture will need to be joined by others. Though I try not to invoke identity politics unless absolutely necessary, I couldn’t help but notice some commonalities. Those found at the protests were almost entirely white, educated, and middle class. I saw few people of color and otherwise a telling amount of overall consistency.
We might take these protests as a personal challenge to ourselves. Do we believe in the power of marching in the streets these days? If we do, we’re going to need to commit the time and energy necessary to becoming a well-oiled machine, much like the war machine many were protesting. One of the worst possible attitudes to espouse, in my opinion, is Revolution for the Hell of It™. Hedonism is just another form of the pervasive cynicism that always is found in great quantity during bad times. There must be a framework of moral guidance in place, else we will be forever shoving security guards and paying the consequences for it. We should have learned on the playground as children that it doesn’t matter who started it. To be successful, we cannot lose sight of a higher purpose beyond ourselves, one that stretches well beyond our pet issues.
Posted by Comrade Kevin at 6:23 PM