Egypt's Struggle is also Our Own 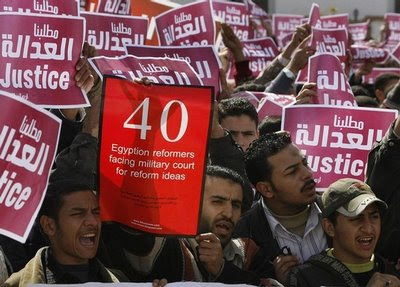 I have watched the violence and the revolt in Egypt with a heavy heart. On one hand, I am overjoyed to see a people long held in shackles struggling to attain freedom. I hope this sentiment will someday encircle the world, so that, as it is written, the wolf and the lamb will live together. As a pacifist, however, it causes me much distress to see police out in the street, blazes set alight, and the familiar signs of overheated passion. In observing everything from a distance of thousands of miles, I am forced to confront my own beliefs. It may be that physical force alone can bring needed reform and change. But, as others far wiser than I have noted, war and warlike impulses are easy, but peaceful solutions are difficult.

As it is written,

The Spirit searches all things, even the deep things of God. For who knows a person’s thoughts except their own spirit within them? In the same way no one knows the thoughts of God except the Spirit of God. What we have received is not the spirit of the world, but the Spirit who is from God, so that we may understand what God has freely given us. This is what we speak, not in words taught us by human wisdom but in words taught by the Spirit, explaining spiritual realities with Spirit-taught words. The person without the Spirit does not accept the things that come from the Spirit of God but considers them foolishness, and cannot understand them because they are discerned only through the Spirit. The person with the Spirit makes judgments about all things, but such a person is not subject to merely human judgments, for,

“Who has known the mind of the Lord
so as to instruct him?”

Many self-professed Christians have ignored this crucial passage. Count me as one who has not. As is my wont, my thoughts return to the past. Centuries ago, a church in ancient Corinth had grown exceptionally dysfunctional. Its members frequently assumed that freedom of belief in Jesus meant anything was permissible. The outward climate of the city beyond the church walls was full of corruption, bad influence, rivalry, and pettiness. As such, the Corinthians struggled mightily with how they ought to live in this world, and not be of this world. It is a dilemma with which we are consumed in our own time. Even if religious belief was removed from consideration altogether, this difficult question laid before us would work well as a statement of purpose. We can, and should, rage against the dying of the Light.

I for one do not ascribe to such a necessarily stark struggle. Regardless of intention, I've been wary of oversimplification. To some, the eternal conflict laid out before us is that of good versus evil. The Early Friends, who lived in 17th Century England did hold such a belief among them. They lived, it should be noted, in a time of great persecution and corresponding social upheaval. The old rules, along with the world, had been turned upside down. A king had been toppled from the throne, then beheaded. An experiment in nascent democracy swiftly became a military dictatorship under the control of Lord Protector Oliver Cromwell. Quakerism was one of many competing sects in a peculiar time, which to many seemed apocalyptic.

I have enclosed several passages below from a particularly instructive essay written by Conservative Friends. I do not believe in all of it, but I believe in enough that it merits inclusion. For the sake of content, I have modified a few words and phrases here and there.

The first generation of Friends developed the term "Lamb’s War" to portray the struggle of Christ with the forces of Satan or evil. For early Friends this was not an abstract theological concept but a reality that they experienced themselves, immersed in this epic struggle that was occurring on a cosmic, national and individual level.

To them, there was something inherently warlike about the struggle between Light and darkness. They did not see war in peace as a contradiction in terms.

This struggle touched all areas of early Friends’ lives - personal relationships, economic relationships, political relationships, religious relationships, etc. Friends came into conflict with the state when they were obedient to Christ’s injunction not to take oaths and to swear not. They refused military service and the payment of tithes. They avoided the vain social customs of their day. They held forth for honest dealings and forthrightness in speech. They avoided the vain amusements, diversions and fashions of the day, choosing clothing that was simple, modest and a witness for their faith. They took seriously scriptural injunctions in their moral behavior.

For first-generation Friends, the Lamb's War was a struggle of an absolute nature, with no room for compromise and lukewarm commitment. Nor did Early Friends see themselves as having initiated this struggle. They understood that this battle was led by Jesus Christ and that they were His followers being led into this great and epic spiritual battle. It was a holy war. The weapons provided by God were spiritual in nature, as opposed to the carnal weapons used by the Lamb’s opponents.

If we seek our own inward purity based on some standard, we ourselves are believers in this same basic idea. Such attitudes are common in times of strife and turbulence. In a prior epoch, many of us might well believe that the Second Coming is close at hand. Some of us still do. In a Quaker context, it is often difficult to try to impose any standardized liturgy or orthodoxy. When individual Truth, based on the primacy of direct revelation with God is valued most, nudging Friends towards a greater, more universal realization proves to be a challenge. Progressives and liberals also place high value upon individual thought and reflection, which often means that its leaders must necessarily be unusually gifted and charismatic to be able to speak for everyone. Reaching resolution by consensus is often a task only for those with Zen-like, if not Job-like patience. Democracy is lopsided and asymmetric, but it is also a distinctly American religion.

This tendency in the western world to elevate humans and the hoped for march to a freer and more decent world have led to a belief in secularism that dominates in western Europe and increasingly also in the United States. It has been especially opposed in the U.S. by Evangelical Christians and Roman Catholics, with resultant deep divisions that have polarized American society.

Other dividing forces are at work, such as an increasing polarization in this country between the rich and the poor. The media and the entertainment industry - which are allied to a mass, materialistic, consumer society - increasingly dominate our culture, even its religious aspects, and Christian services regretfully become a type of superficial entertainment. The physical environment is being plundered and irretrievably changed, with mass extinctions of many species and alteration of the physical environment on which we depend on for ecological services. We expect to have a wide variety of food available to us, sometimes grown 6,000 miles away. Our federal government has taken on a debt of unimaginable size that depends for financing on people in other parts of the world, especially Asia. Should something panic the holders of the U.S. debt, the meltdown of our economy and the society built upon it would be catastrophic.

Even in a secular setting, I doubt most of this would be challenged. And this, of course, begs the question. What do we do now? My humble answer is that a vulnerability for the sake of growth is the greatest need. The world tells us the exact opposite. Protect your left flank. Never show weakness. Check your armor constantly for chinks. Be wary of those who might stab you in the back. But I have found that if we allow ourselves the ability and the agency to be both unguarded and naked, this display inspires others to follow our lead. We can only have true dialogue when we are speaking honestly with one another. And, moreover, the process itself takes time. We want immediate results on our own terms alone, and God's purpose never takes human form. I may not achieve world peace by myself, but I might well be able to discern my own role in the proceedings.

It all starts somewhere. Often the genesis is inauspicious, beginning with one or two courageous people. Others join in, and the process continues from there.

Do not go gentle into that good night,
Old age should burn and rage at close of day;
Rage, rage against the dying of the light.

Though wise men at their end know dark is right,
Because their words had forked no lightning they
Do not go gentle into that good night.

Good men, the last wave by, crying how bright
Their frail deeds might have danced in a green bay,
Rage, rage against the dying of the light.

Wild men who caught and sang the sun in flight,
And learn, too late, they grieved it on its way,
Do not go gentle into that good night.

Grave men, near death, who see with blinding sight
Blind eyes could blaze like meteors and be gay,
Rage, rage against the dying of the light.

And you, my father, there on the sad height,
Curse, bless me now with your fierce tears, I pray.
Do not go gentle into that good night.
Rage, rage against the dying of the light.

Posted by Comrade Kevin at 7:44 AM

Fancy the content I have seen so far and I am your regular reader of your blog.

I am very much interested in adding http://cabaretic.blogspot.com/
in my http://famous-celebrities-in-the-world.blogspot.com/.

I am pleased to see my blog in your blog list.

Hope to see a positive reply.

Thanks for visiting my blog as well !

Waiting for your reply friend !!!!!