An Unmarried Woman: A Review 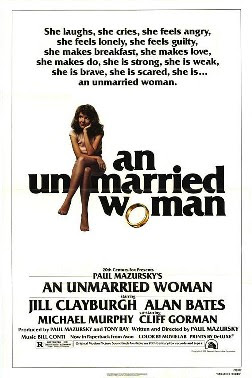 Actress Jill Clayburgh's death this past November from leukemia was obligingly noted in the newspapers and by feminist blogs. Her most famous film, An Unmarried Woman, was also mentioned, though scant notice was given to its content. A few unsubstantial tropes were trotted out and then reprinted, as though writers had nothing especially meaningful to say or add. Though with time some of its ability to shock and provoke has subsided, the movie is still entertaining, though in some ways it is very much a period piece. I found it helpful to look past the dated bits, or at least use them as a measuring stick to note the progression of a dream still deferred. Thirty-three years have passed and much has changed, though some remains.

In the beginning, we are introduced to Erica Benton (Jill Clayburgh) and her daily life. She is a wealthy New Yorker with a stockbroker husband and a precocious, sarcastic teenage daughter. She works part-time as a secretary and assistant in an art gallery. It is worth noting that while she is not a housewife, neither is she completely independent from her husband's financial assistance, lacking full-time work. The arrangement has never seemed to bother her. She's evidently never given much thought to the matter, assuming that sixteen years into a marriage, the arrangement will last until old age and death. The shock she receives when the rug is pulled out from under her is the central narrative theme of the entire work.

Her husband informs Erica that he has fallen in love with a younger woman and intends to leave her. The revelation sends her into shock, and it takes a long time for her to recover her footing. The viscerally disturbing image of a devastated Erica, having just learned the bad news, vomiting outside a mail box on a crowded city street is an apt metaphor for her inner turmoil. Yet, despite his transgression, the husband is not an entirely unlikeable character. He appears to be genuinely compassionate, sensitive, and acutely aware of the misery he has created. This doesn't give his actions a pass, but it does separate them from a more stereotypical, predictable rendering. An Unmarried Woman resonated with audiences in the late 70's in part because its characters were so real and also so inherently flawed. Films seeking to make a heavy-handed point might have shown the unfaithful husband as a monster or, at best, an unsavory figure. Those will come later.

I noted how closely Clayburgh's Erica Benton character is related to Cynthia Nixon's portrayal of Miranda Hobbes in Sex and the City. Both are neurotic, intelligent, high-strung, and exceedingly nervous. Like Miranda, Erica also relies upon the social support of an inseparable circle of female friends. While I viewed the film, I noted that each friend's personality is made to be deliberately unique and separate from that of everyone else. It's not an exact rendering, but it's close enough to be worth exploring. One character is a hardened cynic, gruff, and curt. Another is unconcerned with social taboos and restrictions, particularly when she mentions that she is a dating a nineteen-year-old boy who still lives with his parents. But this is not a film about a group of women. Rather, this is one woman's story of dealing with and eventually triumphing over adversity. Erica Benton is the star here, and her confidants exist out on the periphery. At best, they are a source of comfort. At worst, they make a bad situation even worse.

Still very much processing what has happened, Erica unwittingly commits a few cardinal sins along the lines of Things Not To Do After A Breakup. Not yet emotionally ready to start dating, she reluctantly acquiesces to the pressure of a well-meaning friend. The friend thinks that male company is what she needs to get her mind off her troubles. The non-date that follows is unsurprisingly terrible, leaving her now feeling even worse than before. Having only slept with one man in her life, that being the now ex-husband, she next decides to engage in some harmless casual sex. In a vulnerable state of mind, she goes to bed with a particularly misogynistic Guido painter, who has earlier been making one obnoxious pass after another at her. His particularly outlandish period eyeglasses only emphasize how much of a creep that he is. She has usually been willing to deflect his advances, but still very much healing, she makes a bad decision.

In a era before sexual harassment guidelines and policies were implemented, one never needs to doubt that Erica and all women live in a man's world. Already in a traumatic mind-frame, she has to contend with men who assume that "no longer taken" means an open invitation to sex or to eventual relationship status. If the film were released today, terms we now use frequently like "informed consent", "consensual sex", "unwanted conduct", and "sexual assault" would surely have been invoked by multiple characters. After learning of what happened, Erica's friends would likely have encouraged her to file charges or to otherwise report the details. It is shocking that this suggestion never even enters the discussion for an instant. Their world then, is divided between good men and bad men. Good men respect boundaries. Bad men are forever violating them, in perfidious fashion, regardless of degree and regardless of their fondness for the gray areas.

The absolutely worst experience she endures occurs after another atrocious date. Seeking to end the date early, she hails a cab, headed home. Her date, a pushy man with a particularly bad toupee, forces himself upon her in the back of the cab. The taxi driver, who speaks no English, assumes he is merely witnessing some high-decibel lover's spat until the severity and persistence of her cries make plain what is happening. Much to her credit, she struggles and resists, pushing the man out of the back of the cab, which then quickly speeds away, with her assailant vocally protesting innocence and claiming ignorance. Mercifully, for us the viewer, and she the character, we won't have to experience this again.

While on the subject of boundaries, some of Erica's behavior is unusual at best. Before the breakup, her daughter seems to have an unusually perceptive understanding of her parents' sex life. The daughter also observes her mother wearing only underwear on numerous occasions, always post-coitus. Both parents have a habit of speaking to their daughter as though she is a close confidant and sounding board for their own problems. At the age of fifteen, she sometimes seems as mature, if not a little more mature, than her own mother and father. Interjecting myself briefly here, I have to say that my parents would have been humiliated and aghast if I knew about any of their intimate conduct, opinions, or issues. They drew sharp distinctions between their world and mine. These lines were never to be crossed for any reason.

Erica's boundaries are exceptionally lax in situations where they should be stronger, but part of her development as a woman is to recognize this for herself. Though she has made partial progress towards complete independence, she still behaves as though she has a foot in childhood and a foot in adolescence. The film thus argues that society infantilizes women, never allowing them to fully develop. It's still a contentious point and one worthy of continued debate. Does it take a radical, purely individual shift for women to understand the seriousness of their inequality, and to move past their old ways? Erica would not have willingly made this decision had the tectonic plates not shifted in such an overwhelmingly destructive fashion. The ultimate reform then, would seem to be within the self, not within the whole.

Eventually, Erica finds a predictably sensitive British artist with whom to have a relationship. Even in its day, this was a cliche, and today it's regularly incorporated into many romantic comedies. It is fortunate that at least the character's personality traits are not doctored with heavy gloss and transformed into a romanticized conception of the the perfect lover. The artist has his own personality quirks and fits of irritation, as she has her own neurotic worries and phobias. Nevertheless, the two appear to be quite well-matched and happy. By the last few minutes of the film, one can see that she is well on the path towards long-term healing and is re-establishing stability in her life. Her husband initiates contact after a time, having broken up with his girlfriend, begging her to take him back. She refuses.

Returning to her new love, the artist, he is insistent that Erica and her daughter ought to spend the summer with him. He owns a cabin in a rural part of Vermont. Having two children from a previous marriage he is eager for all of them to meet properly. Erica is ambivalent, unwilling to leave her job, knowing that doing so would mean she would have to quit outright and then be without her own money. She is now eager to start a new career where she can fully support herself without being dependent on someone else's salary. She knows she could exist quite comfortable on alimony for the rest of her life and, if she chose to remarry, could also retain her comfortable standard of living. Her boyfriend is quite famous in the art world and wealthy. Here, the film ends ambiguously, with Erica having made her decision.

In typical Second-Wave fashion, the film's protagonist is an upper class, white, educated, wealthy, cisgender woman living in a large city (New York) on the East Coast. While it does bother to at least incorporate a portrayal of one token person of color, almost everyone else is white. No one appears to be queer, either by implication or self-identification. This is downright laughable, since I find it hard to believe that there are no LGBTs present in any art scene, especially in New York City. Those are my primary criticisms, though An Unmarried Woman is certainly not without its merits. In its day, it was notable for being the latest in a procession of so-called "women's pictures", sparked by Women's Liberation, and can still be classified under the genre of "Feminist Film". A good number of its central messages are now a bit unsubstantial, but a few have application to the current day. I could be more critical, since the screenplay is over-cautious and careful not to push too hard. However, I have also recognized that even moderately controversial efforts reach a widespread audience in ways that something too ideological often cannot. An Unmarried Woman is a classic, albeit a dated one.
Posted by Comrade Kevin at 7:31 AM