The Albanian: A Timely Film 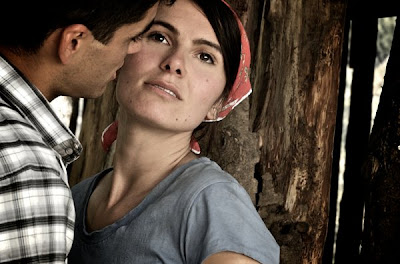 This past weekend I saw a recent German/Albanian narrative film entitled simply The Albanian. Rarely have I seen a movie that confronts the fullest picture of the worldwide controversy regarding undocumented workers and illegal immigration. While its sympathies are clearly with immigrants, it does not resort to cheap sentimentality or agitprop. We recognize how the issue involves all the complications and tragedies of human lives. Suffice it to say that the entire matter is much more complicated than we ever usually contemplate, even for those of us who support immigration reform and human rights.

Arben, the main character, is a young Albanian man living in poverty in a small town out in the country. His life and the lives of family and friends seem nearly a century or more out of date. He has never heard of the internet and much of the basic technology we take for granted. As the film begins, he has returned from nearby Greece, where he worked for six months. Without much in the way of employment in his native country, the poorest in Europe, he has no choice but to undergo a stint elsewhere. While arriving home, he notes that his total payout was discouragingly much less than expected. The cost of attaining a visa and work permit alone was so costly that those two necessities consumed two-thirds of it.

There was a time, and not that long ago, where marriage everywhere was a matter of simple finance. Arben's girlfriend, Etleva has been betrothed, against her will, to a man in America who will forgive her family's debts in full. By implication, the two young lovers decide that they ought to try to have a child to prevent this from happening. Perhaps they weren't being as cautious as they should have been, but the consequences were the same nonetheless. It should be said, as well, that the child is not just some exercise in sabotage, so far as the both of them are concerned. The presumptive parents want a baby, especially Arben. He will later on in the film become fixated on the idea of being a father, even buying a small playpen designed for an infant, a impulsive, nonsensical purchase that only underscores his desire to be a father as well as his anguish as not being able to make his dreams a reality.

When the pregnancy becomes known to them, her family is predictably furious. They insist that Arben cannot marry their daughter unless he agrees to pay an obscenely high price to them for the privilege. He knows he cannot make this money through conventional means, but he does recall a relatively recent conversation with an acquaintance. The acquaintance, who makes a living on directing Albanian workers to other countries for employment, mentioned that he'd once made a decent amount of income by working in Germany. There is, however, one drawback. The cost of a German visa is even higher than in Greece, and far exceeds the cash he has on hand. However, it is still arranged for him to enter the country, but this time he will be abroad illegally. Speaking no German and having little in the way of reliable connections, this act promises a series of severe pitfalls and challenges.

Arben arrives immediately attempting to beat the clock. If he cannot return to Albania with the money before the baby is born, his girlfriend's family is likely to disown her. Birthing a fatherless child is unspeakably taboo in the customs of the village. Arben has only six or seven months to establish himself and save up the cash. His first job is low-paying work cleaning public restrooms, but it's sporadic work, at best. He quickly recognizes that honest work will not yield enough to make his stay worthwhile. At this point he boldly enters a shadowy netherworld where it is probably best to keep one's head down and not ask questions. For a time, he obliges.

Smuggling undocumented workers into Germany is big business on the black market. Unfortunately, this also means that violent thugs and elements of organized crime are heavily involved in the process. The benefits of transporting people of foreign extraction provide a relatively high payout at the end, but with that comes risk of arrest, severe bodily harm, or death. It is irony personified that Arben himself is in Germany illegally. Undocumented workers breaking the law to smuggle in other undocumented workers for pay is most telling, indeed. Caught in the middle of a double cross turf war for business and profit, Arben's boss is killed violently by a middle man. There the money source dries up entirely, forcing the Albanian to resort to brutal means. By this point, time is almost up.

Regardless of what immigration policies we or any other nation set out, they will not stop people from trying to enter our borders. They will not stop people from trying to enter anyone else's borders. The human brain is remarkably adept in solving challenging problems and even scaling walls where questions of starvation and economic inequality are concerned. Men and women with an empty stomach will turn to crime and vice if it fills their bellies. Anytime laws are established to prohibit something, be it alcohol, abortion, or illegal immigration, a black market immediately takes hold. Rarely are black markets conducted with a nod towards equality, fairness, respect, and safety.

Even now, some see fellow humans as little more than statistics, a dollar value draining our economy dry. And even with its inadequacies, legally mandated practices and laws contain basic safeguards to prevent such sinister conduct. These also provide legal recourse to punish those who engage in it anyway. Nefarious elements also reduce people to statistics and profit motive, but with this inhumane response, one also adds very real threat of violence and severe injury. Making honest steps to end global poverty is what is needed most. Not making short-sighted decisions that do not consider the greater consequences is also imperative.

But even if we cannot or will not make these massive strides, we can know that the issue itself goes well beyond baseless xenophobic platitudes about "illegals" taking our jobs, refusing to contribute their fair share in taxes, and emptying our coffers. Like Arben, undocumented workers often decide to leave in the first place because they cannot obtain wealth in their own countries. One could flippantly retort that this simply is not our problem. Ah, but it is our problem. It will continue to be our problem until we have devised a satisfactory solution. Build as many bogeymen as you wish, but it doesn't matter how high the fence reaches upward and across. And it also doesn't matter how judiciously you legislate, accuse, charge, prosecute, and deport. The source of the problem remains.

It has remained so for a long time.

One of the Pharisees asked Jesus to have dinner with him, so Jesus went to his home and sat down to eat. A woman of the streets, a prostitute, heard he was there and brought an exquisite flask filled with expensive perfume. Then she knelt behind him at his feet, weeping. Her tears fell on his feet, and she wiped them off with her hair. Then she kept kissing his feet and putting perfume on them.

When the Pharisee who had invited him saw this, he said to himself, "If this man were a prophet, he would know what kind of woman is touching him. She's a sinner!"

"Two men were in debt to a moneylender. One owed him 500 denarii, and the other 50. But neither of them could repay him, so he kindly forgave them both, canceling their debts. Who do you suppose loved him more after that?"

Simon answered, "I suppose the one who had the larger debt canceled." Jesus said to him, "You have answered correctly."

Then he turned toward the woman and said to Simon, “Do you see this woman? I came into your house. You did not give me any water for my feet, but she wet my feet with her tears and wiped them with her hair. You did not give me a kiss, but this woman, from the time I entered, has not stopped kissing my feet. You did not put oil on my head, but she has poured perfume on my feet. Therefore, I tell you, her many sins have been forgiven—as her great love has shown. But whoever has been forgiven little loves little.”

We do not know why the woman in this story became a prostitute. It can be said, however, that few women, then as well as now, enter the profession unless they are in dire circumstances. Prostitution is an avenue many women (and sometimes men) from impoverished countries are channeled into through dangerous, debasing means. The woman in this parable has lavished devotion on Jesus with a perfume equal to two or three month's worth of wages. In that time, women were not supposed to learn from Rabbis like Jesus, but he broke that rule and many others. By allowing women to travel with him, Jesus was showing that all people are equal under God. Even prostitutes. Even undocumented workers. And with equality comes equal treatment and due process under the law.
Posted by Comrade Kevin at 6:39 AM