Hillary Clinton and the Death of Second-Wave Feminism 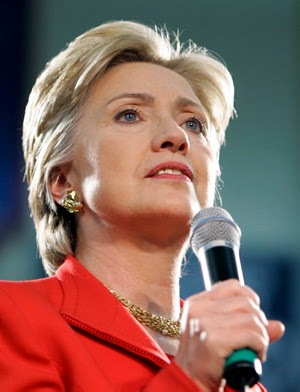 Hillary Clinton's increasingly desperate attempts to undermine Barack Obama, resorting to negative, harshly condemning, and snide put-downs are creating a backlash among Democratic voters and the entire electorate as a whole. Put into the context of the current phase of the race, these attacks are revealed as transparently designed merely to rip Obama to shreds in the futile hopes that somehow she can cast enough doubts among his supporters to effectively throw their support behind her. I was willing to tolerate Saturday's first volley, in which she called Obama to the carpet for his condemnation of her universal health care plan and his criticism of NAFTA.

However, the last straw for me was her rant yesterday in Rhode Island.

None of the problems we face will be easily solved. Now, I could stand up here and say lets just get everybody together, lets get unified." Clinton continued, "the sky will open, the light will come down celestial choirs will be singing, and everyone will know that we should do the right thing and the world will be perfect. Maybe I'm just lived a little long but I have no illusions about how hard this will be. You are not going to wave a magic wand and make the special interests disappear."

That's is a particularly unwise strategy because it directly labels all Obama supporters as delusional and represents a significant change in political discourse. She's not just attacking her opponent, but she's attacking his supporters, and that's is no way to win friends and influence people.

But these tactics are also causing a backlash, perhaps not as easily comprehended, in the feminist community. Her few remaining supporters are socially active women who out of a sense of indignation and sour grapes have fallen over themselves defending her latest rants as somehow empowering and indicative of a double standard against women when they go on the attack. Even Tina Fey on the latest edition of SNL heavily implied that there was something empowering about supporting a female candidate who dared to stand up against Patriarchy.

"Bitch is the new Black", she proclaimed, as though "bitch" should be seen as some badge of honor given to all women who forget that resorting to mean-spirited tactics of any kind is hardly any cause for celebration. Instead of men acting like fools, we now have women who act like fools. Negative attacks like these are never endearing, no matter what gender a person happens to be.

As an Obama supporter AND feminist, I find this sort of misguided logic deeply offensive. For one, it implies that feminism and supporting someone other than a female candidate are mutually exclusively. For another, it attempts to reclaim some intrinsically negative epithet assuming that anyone who calls Hillary Clinton "a bitch" must be acting out of some spirit of sexist critique. I certainly do wish we could get to the point where we could denote mean-spirited people and mean-spirited attacks for what they are, without attempting to spin them out as some mark of sticking it to the system.

It's time to call a spade a spade.

A mean man is a prick or a bastard.

And a mean woman is a bitch.

But is the term "prick" or "bastard" somehow pejorative of all men altogether, or only men? Or maybe we should make it so that these are more egalitarian terms that lambast men and women equally. Or maybe we should apply "bitch" equally across the spectrum so that it spreads more loathing and more "empowerment" to more people and both genders. Let's all be equal-opportunity haters who do not discriminate our hate based on race, creed, color, or gender. Let's rejoice in all who wield their authority without giving a thought to tact or getting along with other people.

As though somehow hate was a good thing. As though somehow we should take pride in being feared, loathed, and despised. As though compromise and good sportsmanship have some kind of double standard to them by which women get a free pass because they're being "assertive". If Barack Obama had been down in the polls at this time and had resorted to negative attacks, I doubt he'd have anyone in his corner and I'm pretty sure that "empowering" would not have been among the words used to describe his tactics.

There comes a time when you can play semantical games only so long and Hillary Clinton has in the past two days proven herself not "a bitch", as though that is something to be proud of, but desperate, petty, vindictive, snide, and spiteful.

These are all adjectives that when applied to men are just as condemning.

If you want to dig for sexism, you'll find it anywhere, particularly if you are looking to be offended. Hence we have the fallacy of second-wave feminism. Hence we have the fallacy of any movement that seeks to lift all people up when all it really does is subvert the paradigm and assign the same illogical thinking except this time with women in a dominate role. I think if women were in control of the world that they would probably make many of the same mistakes that men do. This is why I simply do not understand the argument that "it's time for a woman because a woman could do it better". Gender by itself has no sense of purity. Women have lauded lots of important causes but women have also proven themselves utterly human and inclined to make the same mistakes as men and throw their support behind the same evil causes. You'll find that women played a large hand in abolition and you'll also find they played a
large role in advancing Nazism.

A subsequent generation of women running for elective office would be wise to learn from the mistakes of the second-wave feminists. A subsequent generation of women would be wise to learn that playing the gender card and manipulating popular opinion based on perceived sexism, which while justified in some instances, can just as easily be used to score political points and win cheap sympathy. This reflects badly on all of us, not just women.

In summary, Clinton got out foxed politically and now she's resorting to increasingly more desperate tactics that make her seem in my opinion, not like a "bitch", but a sore loser.

Posted by Comrade Kevin at 4:01 AM

And worse than all that, it's just a losing tactic. I'd vote for her, but I've got to admit, like she has, apparently she's no kind of unifier.

And normally, I'm not for Unifying with the assjackery of the right. But she is losing moderates and Dems even. A woman president is fine by me, but she has too much baggage in the eyes of the American people AND those scumbag incumbent Republicans to get much done.

As a woman who considers herself a feminist but is supporting Obama, I totally agree that whether or not you want to vote for Hillary should not mean you are or are not a feminist. Her rants have totally turned me off and not because she seems like a bitch. It's because I don't see how she can get anything done as President if she feels she must resort to this kind of thing to get her way.

I did see the SNL clip and Tina Fey actually made some good points which would have worked in support of any woman candidate - except Hillary, who, by her actions and words, has made herself unelectable.