You Don't Mess Around with Change 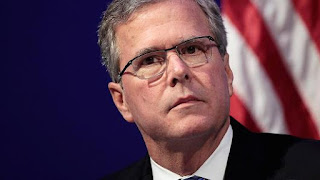 There are, according to the old Jim Croce song, a few things you should simply not do. One of them involves spitting into the wind. Counteracting intractable Republican talking points might be one of these. The time-honored paranoia spilling from the mouths of House Republicans and Jeb Bush is merely the fear of anything moving in a forward direction. Free stuff means "you benefiting at my expense," which is conservatism defined.

What we are arguing about, as Western Europe has argued about for years, is the ethnic makeup of this country. Worried about bankrupting the country due to what you see as entitlement excess? Streamline the immigration program. The GOP and, to be fair, most of white America, doesn't want to see this happen. We have an imagined culture of whiteness to protect, even though we are a nation of immigrants by our very design.

My own faith, Quakerism, was peopled by persecuted immigrants, mostly from the modern day United Kingdom. The colony of Pennsylvania was set up specifically for that purpose. And anyone who has spent time in the now-state realizes the massive German influence present there. Place names, towns, and streets are often German in origin. This is by design, not by mistake or quirk of fate. It made quite an impression on me, as my partner is a Pennsylvania native.

And, though this borders on cliche, this very thing is the fabric of American society. Open the borders. We are not Switzerland or France. Nor do we pretend to be in any of our daily dealings and proudly so. We can speak to the concerns of those who believe we are slowly and steadily depleting Medicare, Social Security, and creating a legion of dependents milking the system dry. They will work and pay into the system. Problem solved.

But America and American life will be forced to change. Change is difficult, but not changing is fatal. We consign ourselves to the same fate as the rest of the first world if we continue to stubbornly and stupidly resist. By the time I die, American society will have radically redefined itself, whether I have anything to say about it or not. That is still several decades off, but unless the will of some foolish souls asserts itself and we become some kind of Apartheid South Africa, whites will be the minority in power and not by a little bit, either.

Like a grown up child, we have become like our parents. But the Spirit of Independence did not guarantee that all men or all white people are allowed to live here (and created equal, no less). If I had to guess, I would suggest that we will probably work together but not live together. We never have yet. The Hispanic population here in DC keeps to itself in one centralized part of town. Other immigrant groups are likely to do the same. But we've already fought one war testing the coalition of states that somehow manages to be a nation. We don't need any more turbulence fighting upstream.

Expecting otherwise may be too much, too soon. We can respect a multicultural society, but true racial integration requires the end of tribalism and tribalism is as old as the human race itself. We can give queer couples the right to marry legally but cultural understanding, true cultural understanding, is potentially impossible. We either don't want to know or aren't capable of knowing. At least not yet.

So stop resisting the inevitable. Let immigrants move here. Let them start a life in what really isn't a rotten place. Nobody said we were perfect. Let's stop acting like we ought to be or that there is some fleeting standard of perfection we can manage. Arguments based on purity are foolish. Let's accept the future with open arms, even if we can't manage to open our hearts a little bit wider.
Posted by Comrade Kevin at 8:16 AM