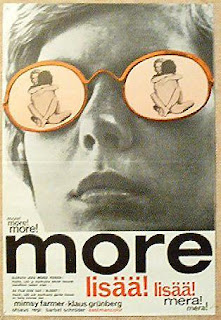 So, reader, have you watched a film you viewed before you raised your consciousness to a higher standard of acceptable behavior, only to find you have changed, but the picture has not? More (1969), fits that category for me. I first watched it in my early twenties on an expensive $40 VHS copy, attracted more at first to the mellow Pink Floyd soundtrack to the contents contained within it, but curious to explore nonetheless.

How times have changed. I’m not sure what I find more objectionable now: the sometimes dubiously consensual sex scenes or the violent outbursts of a jealous man. This film is dominated by jealous men, if the truth is to be known, namely Dr. Wolf (Heinz Engelmann), an outwardly smiling, but ultimately sinister older man, rumored to be an ex-Nazi, living on the Spanish island of Ibiza. Wolf competes with a fellow German (Klaus Grünberg) a generation younger who pursues Wolf's kept young woman with a kind of animalistic passion that is a little frightening to watch.

It is a film of its time and yet not of its time. It mines the territory of a genre that never promises commercial success, an addiction drama. That it made no pretenses otherwise is not really a shock. Its director, a young man born in Tehran to French parents, was trying to make a statement about hippie drug culture and its numerous excesses. It is an effort designed at self-censor, when establishment directors and square corporate executives were trying the same thing in a much less accurate manner.

Its secondary message was to say that men can be corrupted easily, their vilest impulses swayed by hard drugs, loose living. and a lack of discernible boundaries. It’s an idea with some validity but it is clumsily manipulated, turning a supposed former innocent into a hardened junkie in ninety minutes flat. We’re led to believe that the male lead (Grünberg) had recently finished his studies in mathematics and instead of being socially awkward and heavily inhibited as math majors tend to be, had cast his lot by impulsively hitching a ride from Germany to Paris. The action begins here and ends with the demise of a leading character, but I won't tell you which one.

More was Barbet Schroeder’s first foray into filmmaking, arguably his most personal one and certainly his rawest. Much is the case for anyone’s first act. He wouldn’t hit his stride until the 1990’s in Hollywood with Reversal of Fortune and Single White Female, but wouldn’t attract much critical praise until a documentary expose of infamous Ugandan dictator Idi Amin in the Seventies.

Returning to More, the male lead is vastly overshadowed by Farmer, whose histrionic performance as a supremely hot mess was a career-best. Schroeder had a knack for identifying unknown female talent. One of them, Bulle Ogier, he married. Mimsy Farmer had previously played the American B-movie circuit, the girlfriend of innumerable bikers and social malcontents. Unknown actors and actresses weary of playing second fiddle in their homeland invariably drift to Europe. The same was true in this circumstance.

Mostly the film makes me feel old, aware that my days of scouting the next party or group watering hole are long since past me. If the late sixties were merely one drug-addled orgy, count me out. It turns out that our parents were just as foolish as we were, with equally moronic slang that has dated considerably over time. Those afraid of needles and squeamish of self-destructive behavior probably should avoid the picture, but strangely the images capture a moment in time for me. I've probably watched it thirty times over the course of one lifetime, even if I never watch it again.
Posted by Comrade Kevin at 6:00 AM