Movie review: A Nos Amors (The Many Loves) 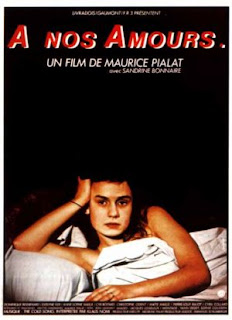 Displays of overt feminine sexuality have been stigmatized for generations. The virgin/whore dichotomy proves tempting to many directors, male and female both. Here, our main character, Suzanne, (Sandrine Bonnaire, in her first role) plays a role as a girl who uses sex with guys to disguise her dysfunctional homelife. She is both a bit of a slut, by parlance, and a bit of a good girl. These are the words of a superior critic to me, lest I be accused of plagiarism.

French indie director Maurice Pialat had been a known quantity before filming A Nos Amores in 1983, considered by many critics to be his best. And in so doing, he launched the career of Bonnaire, a fixture on the French film scene up to the present day. She has transitioned to the role of director herself. Sill a child, but not yet a woman, in this picture she looks like a fawn rather than a mature adult.

Pialat continues the tradition, rooted in male sexual appeal, of the sexually available nubile. We could talk about the inherent fantasy of the role and its objectionable qualities, but it's much more interesting to muse on what lies beyond it. Bonnaire was only sixteen, playing the sort of sexually believable role that would never be tolerated in the United States. The many sex scenes with peers would be labeled "jailbait" today and discussed as such with those parameters first.

Are these Pialat's gendered fantasies or a warm retelling of adolescence? I would opt for the second, while not discounting the first.

But the passion Bonnaire brings to the role is worth discussing, as is the inherent youth and excitement of high school life. These are high school students, though that terminology is not used because of the country of origin. Once again, we focus on the joy and newness of that sometimes ecstatic, sometimes traumatic time in our lives. And as we do, we see it with new eyes, eyes that romanticize and stigmatize in equal terms.
Posted by Comrade Kevin at 12:30 PM