The Philosophy of Nick Saban 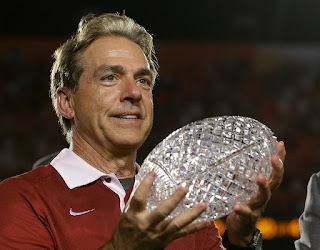 I'm usually reluctant to write about sports on this blog, for lots of reasons. It doesn't fit my target audience and yet it has played a large part of my secret life. I've been reading the recent Nick Saban biography, the current head coach at the University of Alabama, my state of origin, and finding much to like and much to dislike. He's neither and he's both.

Nick Saban is a multi-faceted person for sure, but one thing is for certain, he's often a complete dick. It's not difficult to see why he's been cautiously guarding the details of his life for years. A martinet in the truest sense of the word, he demands total devotion and obedience from his players. Quakers have trouble with obedience. The God they worship is consumed with equality, not some Old Testament God bent on destruction, groveling, and sackcloth.

Maybe if I had some fundamental belief in smiting I might find his tactics more to my liking. Maybe if I felt that his impact, psychologically, upon young black men was more fatherly than about power I would show my respect accordingly.

Once upon a time, I too was a football player. I quit after two broken hands back-to-back, a wanton dislike of my teammates, all they represented, and a depression that would soon spiral out of control and narrowly deny me a high school diploma. A sensitive soul, I'm not sure I would have enjoyed playing for Nick Saban. He would have been too demanding, too quick to criticize. The Stonewall Jackson of football coaches, minus the pious beliefs and the eccentric demeanor.

Every football player expects to be broken down before lifted up. The most perceptive coaches realized I was my own worst critic and that more flies could be gathered with honey than with vinegar, same as in life. Let that be a lesson to us all.

I'm an inherently atypical male if ever there was one. If I ever get to be an influential enough writer, I'll write my memoirs and focus a large chapter about my life as a jock. I can't run away from it, because my body type reflects it, but one of the reasons I've had some gender dysphoria over the years is that I seem ill-suited for the way I look and the people I attract as a result. It's kept me miserable and kept me safe, too.

I don't mean that I would feel more comfortable in female form, but that maybe I would give up an athletic build and all that it entails for something different, something more in line for how I have always felt about myself. Believe it or not, I could have been one of the popular ones, the kind that date cheerleaders and make homecoming king. And peak at age 18. But these sort I never made friends with and never related to in any way, shape, or fashion.

Let's return to Nick Saban. He's much more interesting. What a complex figure, simultaneously cruel and compassionate. I know I cribbed that line from somewhere. Now that the cards are on the table, it makes me glad I'm nothing like him. It's the same reason I could never be a lawyer. I have no love for the fight.

Paradoxically, I hate to lose, but that impulse is counter-balanced by a sense of justice and compassion for the underdog, not the self. I'm a philosopher and an activist, not a bull-fighter, not so ultracompetitive that I can't let it go, As it stands now, we live in a schizophrenic culture caught between the caveperson and the intellect. It would be more fascinating if it wasn't absolutely terrifying in its contradictions.

And in the meantime, where are we? What is our role in this charade in this over-crowded planet where we don't know our neighbors. I streamed past people much like me today in my weekend errands and exchanged nary a word with any of them. Thirty-five years old in twenty-eight days and where am I? Graying temples and receding hairline and memories. That's what I'm made of these days.
Posted by Comrade Kevin at 9:46 PM