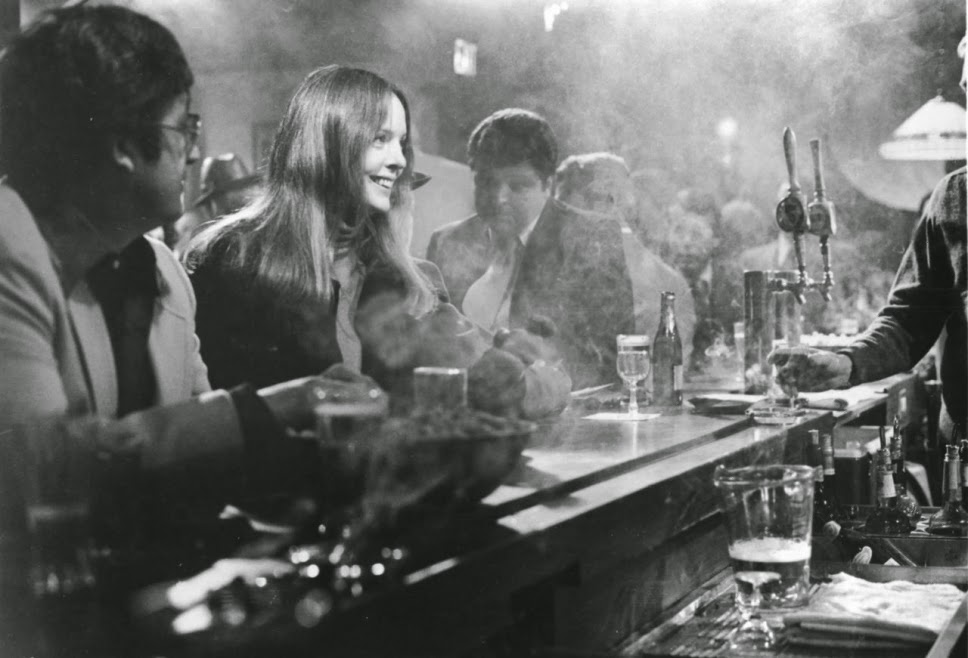 Out of print since 1997 and never released on DVD, it seems curious as to why recent viewers have had to resort to grainy, aging VHS copies or pixilated bootleg streaming video feeds. In its day, Looking for Mr. Goodbar was a sensation, framed against the backdrop of the hedonistic late 70’s, disco, and permissive attitudes towards swinging and one-night-stands. It was controversial for many reasons, one being open-mouthed male on male kissing and another being a brief scene inside a gay bar. Without giving away spoilers, I’ll only say that the female lead engages regularly in sexual promiscuity, possibly to reject her strict Irish Catholic upbringing.

This may be Diane Keaton’s best role, showing her ample range an actress. Here she is no longer expected to play the comic foil to former boyfriend Woody Allen. Instead, her character holds down a respectable job teaching deaf children in the daytime, while trolling the singles bars at night. At first, her decision to play the field comes across as a personal dare, but with enough experience, Theresa Dunn finds she enjoys playing with fire. Indeed, her complacent, nonchalant attitude towards the unpredictability of this shadowy, smoky world that is her little secret eventually backfires spectacularly.

Looking for Mr. Goodbar was considered scandalous in its time, taken as a sobering warning that the sexually liberated Me Generation might contain an unforeseen element of terror. Since its release, some concerned parents have insisted their daughters watch the film as a means of deterrent. The main character, Theresa, resorts regularly to impulsive sexual behavior by actively courting a working class tough as a lover (a young Richard Gere) who is dangerous, rough, and a little nuts. That being said, the burden of ensuring physical safety and avoiding sexual assault should not be placed squarely upon the shoulders of Theresa or any woman. Men ought to bear the primary responsibility, but in situation after situation, they do not.

A relationship with a married college professor is her first experience with sex. Though at the outset she is somewhat timid, she enjoys the power of seduction and quickly develops a taste for it. Bettering her in impulsive behavior is her sister Katherine (Tuesday Weld). Katherine gets involved with a series of unhealthy men, gets two abortions, one of them without knowing for certain which man is the father, pursues whirlwind courtships and multiple marriages that always end badly, and routinely keeps sketchy company. She’s a one-woman drama storm, also in active rebellion against her doormat of a mother and a dictator of a father.

One might call Theresa somewhat naïve, and to an extent she is. But instead of being a purely gentle and benign soul, she has a stubborn and hard side, jaded and cynical. Diagnosed with polio in early childhood, the experience left more than a scar on her lower back. The memories clearly still haunt her, though they have managed to both leave her vulnerable and stiffen her spine. Her childhood leaves clues about her motivations that the film at times leaves up to its audience.

Her downfall will come in the form of a self-loathing rent boy. Though he has played the part of a gigolo with many gay men, he is virulently homophobic. The men with whom he has been involved or who make passes at him are victims of his bitter rage. He has a life elsewhere beyond the city, but for the moment he must rely upon a series of men who desire his sexual services.

Theresa is flinty and independent, but also insecure and self-doubting. Perhaps these contradictory feelings motivate her to take utterly random, mentally unstable men to bed on a regular basis, men many women would ignore or reject their advances. Before long she develops a no-nonsense exterior, which suits her well, but isn’t enough to keep her safe. Though she is presented with the consequences of her actions frequently, she is willing to tolerate abuse, believing the payout is higher than the potential repercussions.

In addition to the debauchery, she pursues a relationship with a do-gooder social worker who is a little too wholesome for her tastes. He endears himself to her parents, especially because he, too, is Catholic. Pleasing her parents and family is the very last thing Theresa wants. She continues to keep up risky relationships with riskier men. One of them will prove to be her undoing, but I did promise no spoilers. By the last twenty minutes of the film, Theresa has indulged herself in recreational drugs and is little more than a glorified sex worker.

The movie is based on a best-selling book written by Judith Rossner, which was itself based on a violent attack upon a New York City schoolteacher named Roseanne Quinn. Quinn, like Theresa Dunn, appears to have had a thing for rough trade. Theresa picks up men who are not her social equals, nor even her intellectual equals. Why she chooses such characters remains unknown. Returning to the rebellion argument, perhaps they are the very opposite of the men she has been raised to emulate.

In the meantime, she continues to develop a double life, saintly and chaste during the day, sleazy and reckless at night. Her behavior after hours while not at work becomes an addiction that she has no desire to reform. One evening she returns from a club to find that a regular lover has picked the lock to her apartment and is waiting for her inside. She strongly and vocally implores him numerous times to leave and he declines. Instead, he introduces her to cocaine and the two make love.

Looking for Mr. Goodbar is difficult to easily analyze. On one level, it comes across as a cautionary tale, a kind of real life true crime story warning women to be careful with whom they take to bed or take into their trust. On another, it’s the story of a talented, idealistic, but self-destructive woman with some sort of personality disorder. Men and women both have had the misfortune of finding erotic pleasure and satisfaction in the person of something or someone very unhealthy. In our still male-dominated world, women with this affliction usually find themselves in much greater threat of harm.
Posted by Comrade Kevin at 7:00 AM