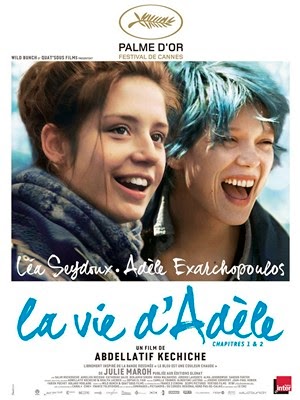 Last year’s winner of the Cannes Film Festival’s Palme d'Or was an especially controversial French/Belgian film. Entitled La Vie d'Adèle – Chapitres 1 & 2 – The Life of Adèle – Chapters 1 & 2, it has been retitled for the English-speaking world as Blue is the Warmest Color.

The film is a coming-of-age story about a high school girl, Adèle, who finds herself strongly attracted to an older, jaded lesbian. Our main character takes her eventual lover, Emma, by great surprise at first. Emma doubts if Adèle is truly interested or is merely a bicurious straight girl looking only for experimentation. Convinced at last, she begins a relationship with her younger paramour, one which takes many expected and unexpected twists and turns along the way.

Blue is the Warmest Color won tons of notoriety for its sexual content, and rightfully so. In the United States, it was relegated primarily to art house cinema alone, due to its NC-17 rating. This dubious distinction remains a relative rarity. Most film directors avoid it whenever possible to salvage a profit. Chain American cinemas often refuse to screen any work beyond an R rating. I recall that in my own life, the 1990’s critically-panned film Showgirls, itself rated NC-17, was not available in even a single local movie house. Seeing it for myself would have required I take a lengthy drive to Kentucky, and I was not interested enough to take the time.

Quite unlike Showgirls, Blue is the Warmest Color is worth the audience’s time and patience. Due to the amount of attention and laudatory critical notices already written about it, I would prefer to not focus for very long on its sexuality. Yet, under the circumstances, I find I absolutely must.

It is impossible to ignore what got everyone's tongues waggling. The strong sexual content fairly begs for greater scrutiny. This is a move taken at great risk, one that comes dangerously close to overshadowing the rest of the three-hour-long running time. Blue is the Warmest Color is the sort of movie that makes a powerful impression on the viewer, even with its shortcomings.

I’m far from a prude, but the graphic lesbian sex scenes did strike me as gratuitous. In film, the last barrier yet to topple is that of unsimulated sex scenes versus simulated sex scenes. Unsimulated, in this context, means completely real, not cleverly disguised. A precious few studio films have challenged the standard and most comply. Many believe it crosses the line from art to pornography. Any cinematic effort in that vein, regardless of quality, would still receive the modern-day equivalent of an X rating, consigning most movies towards even greater obscurity.

As much as I want the aforementioned content to be liberating and subversive, one could make a strong case that it is neither. A reviewer from The New York Times, a self-admitted feminist and lesbian, wrote that she was suspicious of the very existence of these love scenes, particularly because of their extended nature. In her view, heterosexuals would take the effect merely as titillating and amusing, while queer audiences would see the steamy scenes as contrived and inauthentic. This is, to a large extent, my own perspective.

Not every barrier was crossed. An early oral sex scene shows that a particular female sexual organ was a product of the makeup room, not biology. Few films and filmmakers go to the trouble to choreograph love scenes as precisely as this one, which required much from its two young actresses, who are heterosexual in real life. Unusually long takes were critical to the narrative of the film and they made severe demands upon both main leads. It is for this reason that I am cautious about criticizing too harshly the superlative acting jobs that make the film.

As a bisexual man, I found I resented the way one of the two main characters, Adèle, was presented. Though she is bisexual and has lovers male and female, this distinction is never spelled out and conspicuously absent. She never admits to being anything, leaving her sexual orientation a question mark rather than a period. Adèle reinforces stereotypes about bisexuals as fickle and confused, unable to decide which gender to pursue, and therefore not to be trusted. The lesbian scenes, as authentic as they try to be, continue to reinforce stereotypical tropes that bisexual people have fought against for years.

I won’t spoil the ending. Blue is the Warmest Color is an excellent film and then some, though I will retain my reservations. We’ve come a long way, but we’re not there yet.
Posted by Comrade Kevin at 1:40 PM