Call the Midwife: A Review with Digressions 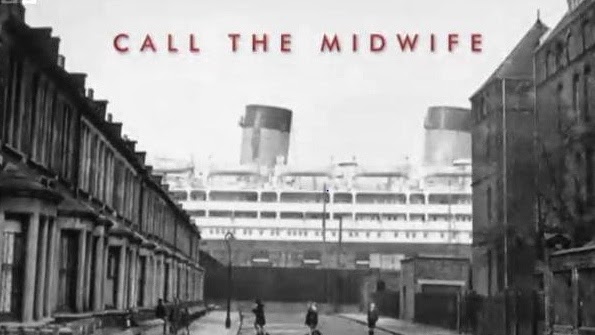 The British television drama Call the Midwife has been critically acclaimed since its first season aired in 2012. I only discovered it a week or so and have been utterly entranced. In particular, the cast is predominately female, a rarity even for the current day. The series shows us life where men are the minor characters, though even behind the scenes they still tend to pull the strings. Gushy dialogues exclusively about men are fortunately few and far between. These women work too hard for frivolity of any sort.

As the series begins, a young midwife, Jenny Lee, takes a new job in poverty-ridden East London. She is assigned to an Anglican Religious Order, a convent of nuns who prepare women for childbirth and deliver babies when the time is ready. Living in a strictly religious setting is new for Jenny, and somewhat unsettling. Like many in her time, she is well-versed in the particulars and language of Christianity, but is wrestling with the idea.

The conclusion of one episode concerns the faith journey of the main character. Each ends with a voiceover of an old woman, Jenny, now much older and wiser. In one such summation, she concedes that while she might not have understood fully what faith is, she could at least grasp the concept of love. A richer comprehension of what faith offers awaits those who seek it, but its lowest common denominator is love.

I might well say the same for 21st Century America. I know many who practice the religion of unselfish love for others. Many work in helping professions. Others wrestle with ideas and solutions to perplexing problems. With time, they may develop a more enriched spiritual life. What some ascribe to God, others credit to wisdom.

When I wrote a few weeks back about the divide between Atheism and Religion, a reader noted in the comment section that his completely nonreligious upbringing had pushed him away from God, but in time he reached a greater understanding. Faith of any sort changes over time and where we end up at any one point may astound us. Writers often go through phases. T.S. Eliot grew increasingly religious as he aged. His late period works are very different than the early poems many have memorized.

As the story goes, the deeply religious Malcolm X was approached by a young black woman at an event.

With a grin, Malcolm replied, “You will someday, sister.”

Call the Midwife does make the odd political statement. In the pre-birth control era, a woman has produced an astounding eight children and is pregnant with a ninth. She’s resorted to superstition and old wives’ tales to prevent pregnancy, each of which has failed in dramatic fashion. But at a time before hard science and the birth control pill, her options are frustratingly limited. It’s difficult now to imagine a time before the prevalence of effective birth control.

In despair, she begs a doctor to have her tubes tied, but he is hesitant to perform the surgery. Pitifully poor, she relies upon the National Health Service to subsidize contraception, but it will not. Americans tend to look to the UK as an example of efficient, truly socialized health care. While much is to like, here we see that the latest Obamacare controversy over birth control is not a new one.

The nuns have recognized over years of service that real life application and wishful thinking theology are two very different things. Indeed, one hears no platitudes about baby killing. They’ve seen too many women without the financial means of feeding their vast brood. They’ve observed babies in their crib being attacked by rats. Being fruitful and multiplying in a vastly different context, an urbanized society, has decidedly harsher consequences.

I will say this for the series. If we do think aversion therapy is effective, high schools should stop forcing young women to carry simulated babies with them. They should show them this show instead. If I were a woman, this show would cure me of any desire whatsoever to procreate. The process itself is frightening enough, but the added risk of birth defects and unforeseen consequences adds additional terror. Our inborn, biological desire to continue the human race must be powerful.

I’ve never felt that the agony of childbirth was a punishment from God. Whoever wrote those words and formed that concept was trying to explain what many saw as unfair and petty. Over the course of human history, many women have died, or have experienced agonizing labor that persists for days, not hours. The story of the Garden of Eden has, to me, always been more symbolic than literal. Any answer is better than none, for many.

And in that spirit, let us recognize that what we do not know still outweighs what we do. One year red wine is lauded as healthy, the next it is to be removed from everyone’s diet. 6 out of 10 doctors prefer Chesterfield cigarettes over any other brand. And in the meantime, God is mystery and love. Even true believers harbor doubts and are blind to their own imagined sagacity. True knowledge is a question of rolling with the punches, not digging in for a siege.
Posted by Comrade Kevin at 9:14 AM