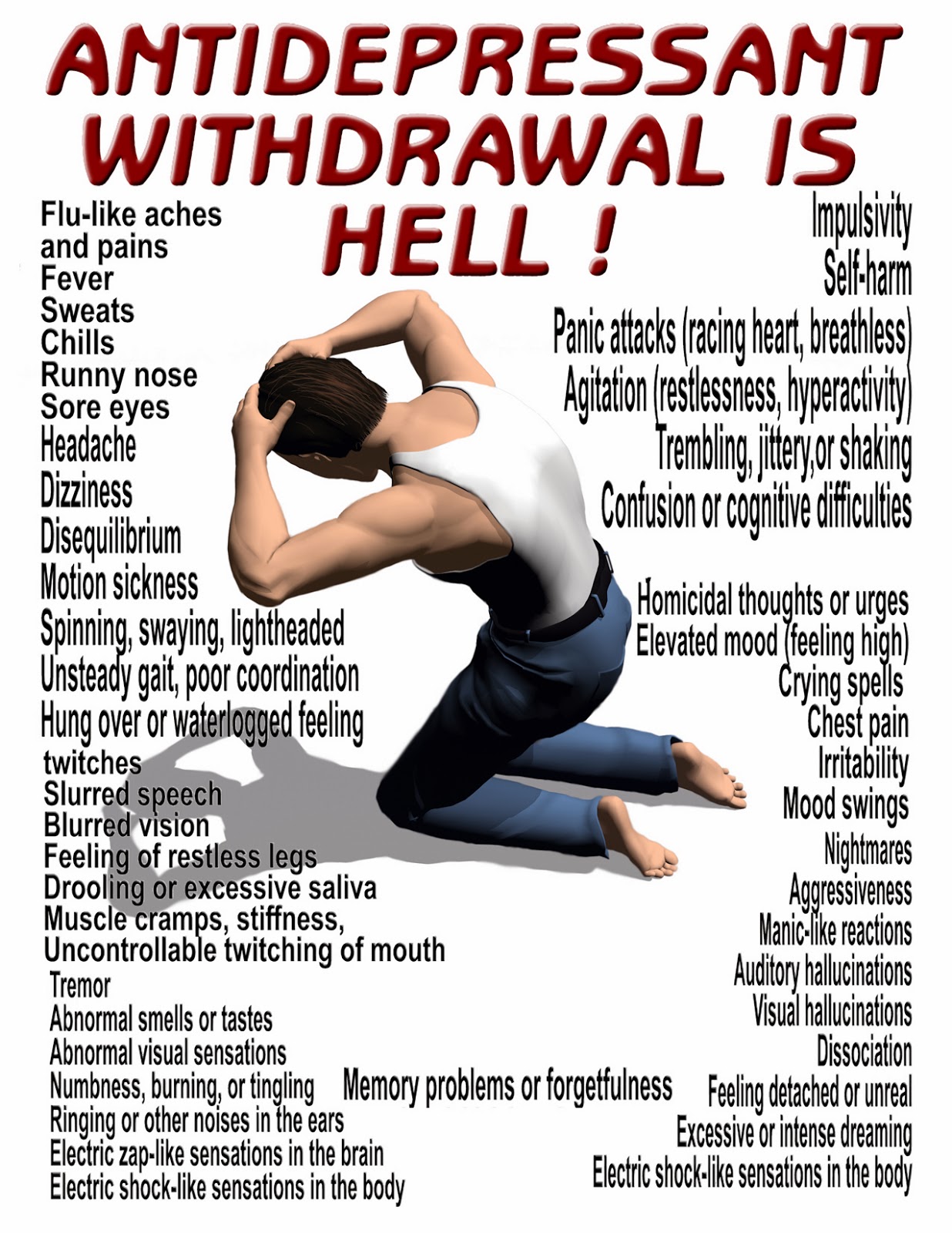 As anticipated, antidepressant washout and discontinuation commenced over the weekend. I will continue to write what I can until this regrettable, but necessary process concludes, though it may take a month from start to finish. The pain and discomfort is intense enough to keep me from doing my usual good job with opinion pieces and op/ed posts, but I can at least describe my immediate state. I may even be able to educate a few people here and there about the particulars of bipolar disorder.

Periodically I peer out of the living room window not far from my computer desk. The snow is still coming down heavily, much as has been the case for the past several hours. The entire city is more or less shut down for today. I find the effect calming and beautiful. I never grew up in an area of the country where snowfall was plentiful, and although a native of the Midwest or New England might scoff, this has been an unusually snowy and frigid winter for us.

Washout involves tapering off of medication. In this case, an antidepressant is no longer working. Specifically, I've been taking Zoloft for the last two years. Unfortunately, as is often the case with the drug, the effectiveness that psychiatrists call efficacy is simply not present any longer. Even dramatic increases up to the maximum dose, 200 mg per day, have not helped. I began at 50 mg, a relatively modest dose, which was effective for several months, but then required steady increases in dosage to receive the same benefit. Now it barely works at all.

This is a new experience for me. I've certainly changed medication before, multiple times, but I've never had an antidepressant poop out on me. Zoloft is one of the oldest drugs on the market that is still regularly prescribed, receiving FDA approval for depression and generalized anxiety disorder in 1991. In its day, it was a great advance to what had come before it. It's one of the founding member of the SSRI class of antidepressants, which stands for Selective Serotonin Reuptake Inhibitor. This class of drug revolutionized treatment for depression and other co-morbid disorders, co-morbid meaning those disorders that happen alongside and simultaneously with depressive diagnoses.

In the 1960's and 1970's, there were relatively few medications that specifically treated depression. They were either tricyclics, with significant side effects, or monoamine oxidase inhibitors (MAOIs), with even more side effects. The cult British folk singer Nick Drake died in 1974 from an overdose of a tricyclic antidepressant known most commonly in the United States as Elavil. Elavil was approved for use in 1961. Drake was prescribed a medication that was nearly fifteen years old, which shows how confounding it was at the time to find new medications and treatments for depression.

I was on an MAOI for four years and had to watch my diet with extreme caution. A hypertensive crisis results from consuming the wrong foods, in this case, an amino acid called Tyramine. It's usually found in fermented or aged foods like cheese, yogurt, and sausage. Sometimes very problematic ingredients are concealed and unlisted within foods. This can cause a strong, scary reaction I never wish to repeat.

I had four terrifying Emergency Room visits, after which I made an informed decision to come off of MAOIs. In the back of the ambulance, my blood pressure and pulse rate reached dangerous levels. The effects came in waves. My pulse would go through the roof, then level off, then resume its upward climb. The incessant back and forth had me feeling panicky and afraid. Within a couple hours, now in a hospital bed, my condition stabilized and I was soon discharged and able to go home.

Before then, I'd taken an MAOI without a mood stabilizer, Lithium, which for me has been an excellent anti-manic. Some months earlier, without Lithium, a MAOI threw me into a manic episode intense enough that I had to spend nearly four weeks in the hospital regaining my sanity. That is nothing I ever want to repeat, and fortunately that period is six years in the past. I have, blessedly, managed to avoid hospitalization since then. I do not anticipate the same happening to me now, but I do know that I'll feel fairly miserable for a while.

Since then, many other medication have been developed, and it may do me good to be placed on a medication that has only recently been introduced. Past antidepressants I've taken like Effexor and Cymbalta have greater lasting power, but they both have absolutely hellacious withdrawal symptoms. Psychiatrists were slow to recognize the problem, meaning lots of people suffered unnecessarily. My treatment options now include drugs I have never taken before because they have only recently been released. I have only one more day before I meet with my psychiatrist to consider new options.

Coming off of Zoloft depends on whether I can tolerate it a swift taper, or a more prolonged one. The rule of thumb is usually to half the existing dosage for a week, then reduce it by half once more. In my case, I'll be on 100 mg for a week, 50 mg for a week, 25 mg for a week, a week of nothing, then the introduction of the new medication or medications will proceed. Even cautious tapering doesn't prevent major side effects, but this process might be abbreviated somewhat because Zoloft isn't working, regardless of the prescribed strength.

I scarcely remember a time where I wasn't on some medication or another. I began taking antidepressants when I was 15 and was formally diagnosed with manic depression at 21. For many years, I defined myself closely with my illnesses, but that was because they were too fresh and too present. I never wanted to be considered eccentric, or worse yet, mentally ill.

For the duration, bipolar means taking my medications, regulating my condition, conveying my symptoms to the psychiatrist, and finding a way to live in spite of it. At times, I can almost forget that I'm disabled, until I look over at my bedside table and find nine specific medications to be taken periodically throughout the day. It's a lot of work and I find I have to make time in my day for self-care. I have to follow multiple steps in sequence when I wake up in the morning and before I go to bed at night.

In writing this, I've experienced several severe short-lived, but unpleasant mood swings, which is common for antidepressant withdrawal. What I don't know is how debilitating this process will be. If it is no worse than it is now, then I'll consider myself fortunate. But there is always the possibility of needing to occupy the bed or the living room couch. I'll cross that bridge when I get there. In my head, I hear the voice of my mother telling me not to borrow trouble from tomorrow, which is sage advice. I'll deal with today for now.
Posted by Comrade Kevin at 8:29 AM

Good luck and I hope you find an effective substitute for Zoloft. I'v been on Prozac for about 8 years now and I am glad it still seems to be working for me. I am not bipolar but have depressive tendencies and panic attacks, which Prozac has really helped with. My dad, who did have major depression, was helped a lot by an MAOI but the dietary restrictions were hell. Best of luck and I hope you are feeling better soon.

Thanks for documenting this part of your life and experience. A lot of people don't have a clue about what it means to be bipolar, and definitely need and appreciate the education.