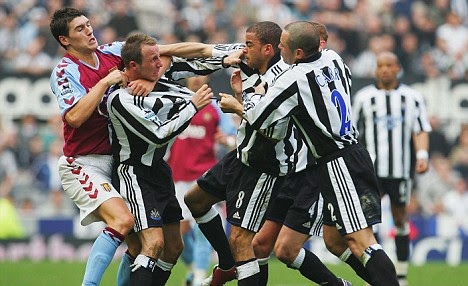 Over dinner a few weeks ago, a group of Quakers in their 20’s and 30’s discussed the game Wink. It is difficult to describe if you haven’t played it, but in some ways the game is similar to the childhood pastime Red Rover. I have more experience with the latter than the former.

In my childhood, we played Red Rover on the school playground each Friday. It was a concession granted us for good behavior, by teachers excited at the prospect of two days off of work. When one of the adults panicked over fears of broken arms, we were never allowed to play it again.

A woman who attended a Quaker college remembered that Wink was flatly denied to students. Our pacifist roots rendered the game far too violent. I’m relatively new to pacifism, so I may be more tolerant than those raised in the faith since birth. The conversation got me thinking about what violence is and what it’s like to live in a violent society. Becoming a Friend caused me reevaluate earlier stances which were once never reasons for concern.

Long ago and far away, I was an athlete. When asked what it was like to play an intensive team sport like football, I respond that it was like being in the military. Basic training is the best metaphor I can use to describe what it’s like to sweat and toil for hours under the unforgiving sun. I lived in fear of being dressed down at high volume by a coach should I make the most modest mistake. It is well that I enjoyed the games as much as I did, because I absolutely hated practice.

A game is almost like an out of body experience. It proceeds too quickly for circumspection and analysis. Only observers have the time to make complete sense of what has just happened.  To this day, I only remember a few details here and there, mostly significant outcomes like touchdowns. A play proceeds and is over in mere seconds. One picks oneself up off the turf and immediately resumes position across the divide. I imagine the same thing is true for soldiers in combat.

With adrenalin coursing through my system, I might as well have been a machine. I was usually oblivious to pain until much later, sometimes a couple of hours after the play clock had expired. I saw my teammates receive severe injuries on the playing field. These included broken arms and torn ligaments. Some were serious, some not.

Injury is an omnipresent threat players know instinctively, even though they’re too consumed with their assignments to worry whether or not they’ll be the next to go down. I became so accustomed to pain that it took me a week and a half to recognize one of the bones in my hand was broken, snapped right in two. The coaching staff pressured me to have a hard cast put on, so that I could continue to play. The orthopedic doctor disagreed and told me I needed to fully heal first.

Today, I have the ability, within reason, to define what nonviolence means to me. In those days, I didn’t have much agency to determine my fate. I did what I was told and never questioned the system. My talent level was high enough to win me the respect of my teammates and most of the coaches. I always saw it as the right to be left alone and in peace. I imagine the same is true for talented soldiers, who consistently win medals for valor and bravery in the face of the enemy.

I pushed my body to an extreme level on a daily basis. Back then I was in the best shape of my life, but I’ll never forget the sensation of gasping for breath at the end of wind sprints. I know now I’m not the right personality type to roam the gridiron. Though I could have played college ball somewhere, I was too highly strung and anxious to sign my life over to someone else for months at a time. Being designated as a good player only made me retreat within myself more.

My teammates despised practice as much as I did, but I wondered constantly about their own motivations to put up with it. As I said, I kept to myself. Most of my friends were reserves that rarely, if ever, got a chance to play. I rarely spoke to starters like myself, because their interests revolved around hunting, Evangelical Christianity, and cheerleaders. I was a fish out of water from the start.

Though I was treated as royalty by teachers and other students, that kind of deference and adulation never sat well with me. I was no conquering war hero or happy warrior. Instead, I quietly did my assignment, showered, and left for home. I didn’t care about going mudding in a pickup truck on Saturday afternoons, or shooting an eight-point buck. Those interests were fine for some, but they weren’t mine.

One could make the argument that football is a militaristic game and I won’t discourage those who do. Removing the occasion for all war is a difficult standard to uphold and the games mean too much to me to push away forever. Our society is reasonably tolerant of violence, though much of it flies under the radar. The culture into which I grew up is sports-mad and gives me an opportunity to harmlessly small talk with people from back home. They’re often not unlike my teammates. What common ground would we have otherwise?

Violence and tradition easily become linked. We live in a society slowly unshackling itself from brutality, though some may see the current day as too passive. If we could isolate larger issues from their component parts, the task of fostering peace would be much easier. Violence, much like sexuality, is never only about just violence or just sex.


Studying war can be unconscious, rather than overt. My teammates participated in sports for lots of reasons, but I doubt they ever really understood the greater implications of who they were and what they were doing. Each of us can do our part to facilitate peace on a greater scale, but we must recognize that simple kindness and right thinking is not enough. We may not receive any confirmation that our efforts have succeeded until much time has passed. Patience with ourselves and others removes the occasion for all war.
Posted by Comrade Kevin at 9:54 AM