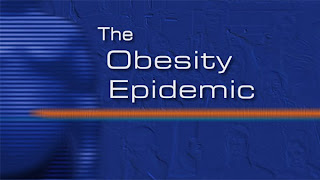 An obesity epidemic has been declared. First Lady Michelle Obama has made it a centerpiece of her agenda. Even First Daughters Sasha and Malia have been personally placed on a healthy diet by their mother. Even though both young women are of good physical health, their mother has decided to regulate her children's food intake. I follow the logic. It is never too soon to start eating properly, say proponents of this approach. I agree, though I feel this is often a simplistic resolution to a complicated problem.

The move has been controversial. Mrs. Obama decided to put both of her girls on a closely regulated food regimen at a very young age. Neither child has problems with obesity and yet, they still adhere to the same sort of precise, regulated standard that many people would only uphold if they were trying to lose weight. Whether that's right or wrong is entirely up to the eye of the beholder.

In any case, it seems that people are listening. The American public is consuming fewer soft drinks and snack foods, leaving businesses who produce these products scrambling to provide healthy alternatives to consumers. But if good health and a balanced diet were enough, it would not explain why certain people have such a difficult time losing weight and keeping it off. Women, for instance, are biologically predisposed to keep weight on in the off chance that they might need to carry a child. This makes it often very difficult to lose even a few pounds at a time.

At Thanksgiving, one of my sisters arrived for the traditional meal with her soon-to-be husband in tow. I have learned to be extremely sensitive about matters of body image around her. In the past, one comment intended with what I thought was the greatest sensitivity landed very wrongly. It had nothing to do with her weight, but it did concern decisions she had made in her life. She refused to talk to me for three months because of it.

Every time I see her, which is usually twice a year, I notice that she's gained more weight. It pains me because in addition to her increase in size, she looks very unhealthy and unwell. My sister has dark circles under her eyes and looks exhausted. I know there is something going on here, but I dare not ask. My parents fill me in with her news on a frequent basis. It's not as if I don't know her or know her situation.

As a child, she was a little chubby, but nothing serious. We thought she'd grow out of it. In middle school and into high school, she became relatively slender. We thought she was finally losing her baby fat and blossoming into a young woman. What we had surmised was not the case. We learned after months of denial that she was, instead, bulimic. This was why she'd been able to keep the pounds off for as long as she had. We were told, at long last, that she'd never had much willpower regarding food.

That was then. This is now. Reversing course, my sister apparently decided to opt for the other extreme. She rarely watched what she ate, kept up a poor, very fatty diet, and continued to put on weight. At this last family gathering, she was the heaviest I've ever seen her. I noted, with worry, that she was now a plausible candidate for a gastric bypass or some other sort of obesity surgery. That decision is hers, of course, but I will support her if she chooses it. It is not how she appears to the outside world that troubles me. Rather, I worry about her eventually developing diabetes or other serious health problems because of her weight.

This may be the emptiest of empty victories, but at least her eating disorder is no more. Neither outcome is beneficial or productive, leaving me grasping for something uplifting and optimistic from the whole mess. She has exchanged one sort of sickness for another. Until she stabilizes others areas of her life that beg for alleviation, being very overweight is the least of her worries. I want to honor her privacy while recognizing that I may need to intervene eventually. She cannot continue to live like this.

We often view obesity though several incomplete and unsatisfying lenses. One popular way of thinking blames overweight people for not doing the hard work necessary to watch what they eat. It's a simple matter of personal responsibility, they say. Others place the blame on companies and corporations, pointing to hidden additives in foods, especially processed foods. Even more commentators rightly point out that economics are a major factor; cheap food is usually unhealthy food. As is true with complicated matters like these, the answers take a little from column A, a little from column B, and a little from column C.

The organic or locally grown food I see sold at farmer's markets here might be better for you, but it surely isn't cheap. Like so many items on the progressive agenda, enrollment and participation depends entirely upon income and level of education. My working class relatives in East Alabama are shockingly ignorant of Thai food, the healthful virtues of brown rice, and hordes of foodies. And outside of a large, very urbane city, I'm sure their perspectives are not unusual. I am increasingly concerned about a wholesale Soylent Green world, where only the rich can afford actual food, and the unwashed masses have to make do with whatever government-provided sustenance they can afford.

In my parents' house is a smiling, framed picture of my sister with a flower tucked into her hair. It shows a young woman with promise, nearly graduated from high school. She'd just obtained a full scholarship to college and looked forward to opening a new chapter in her life. The most well-rounded student of the three of us kids, we were sure that nothing would stand in her way. What happened is indeed a tragic story, but one for another time.

That fading image could not be more different than what I recently observed, eight years later. Obesity is, to be fair, the least of her worries. Until she deals with greater issues, how she tips the scales is of secondary importance. She's regrettably inherited the anxiety disorder and depression that are hallmarks of my family's DNA.

One of my criticisms of this navel-gazing focus upon obesity awareness is that it forgets to recognize that many other conditions are co-morbid alongside being overweight. Obesity has many causes, several of them equal parts psychological, psychiatric, and physical. It's very easy to proclaim that fat people get what they deserve, until it happens to someone you know. It's not as simple as some may wish to believe.
Posted by Comrade Kevin at 10:16 AM