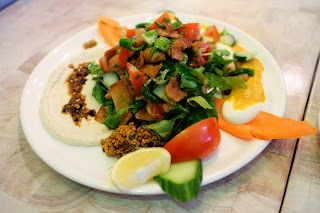 The title of this post is pulled from Peter DeVries' classic short story.

Christmas dinner for me this year was much different from the usual. Most often, I’ve spent it in the company of my nuclear family, the epitome of white, middle class suburban domiciliary. My family is reasonably tolerant of those not like themselves, but this set of shared values often exists in the abstract, rather than in reality. When it comes to something as intimate as dinner served with the good china and the antique pewter cutlery, we’ve rarely entertained guests who don’t look, speak, and act like us.

This time around was a complete shock to the system. I was not expecting to find diversity in multiple forms chatting peacefully in a crowded residence. Sitting around the table were black and white, young and old, straight and gay. The guests included an interracial couple and two gay men, both of whom were long ago married in all but name. In my personal convictions, I support same-sex marriage and hardly bat an eyelid at a mixed race couple. But as I noted before, I should be quick to add that my beliefs in favor of tolerance often only exist in the abstract. My first impressions were initially very different from my idealized notions of what was to come, growing especially evident as I shared the same room with everyone who was present.

Martin Luther King, Jr. noted presciently that the most segregated hour in America is 11:00 am on Sunday morning. This is when both whites and blacks worship separately, in different buildings and different parts of town. This quote has been overused enough that it borders on cliche, but the truth behind it is very much still valid. We may work together and occasionally cross paths in relative harmony but it’s still more comfortable if we consign friends and family to those we deem most like us. The most segregated hour in America doesn’t stop with church. Rather, it occurs with great regularity during Thanksgiving, Christmas dinner, and the holiday season.

Those who wish to dissect the reasons why are welcome to do so. I'm not enough of an authority on the matter. I wouldn’t say that my reluctance or my family's reluctance to expand our social circle is racist or intolerant in nature. Instead, I’d say that, for me, I find myself quickly out of my comfort zone and worry that I’ll say the wrong thing at the wrong time. I experience a kind of low-level paranoia that ratchets up my stress level and makes me a thousand times more cautious about what I add to the conversation.

An album released a few years ago by the alternative group Modest Mouse cleverly summarizes my usual worldview, and perhaps yours as well. It is entitled “Good News for People Who Like Bad News.” At times, I have fallen in love with criticizing everything, finding significant flaws around every corner. I wonder whether effective reform is really possible, but I will concede that haven't put it to a direct test, either.

There are no shortages of problems to call attention to, often those with no clear resolution in sight. One might find this pastime defeating and demoralizing. Yet, paradoxically, I almost crave a steady diet of bad news, even if it does nothing beyond raising my blood pressure. At sizable contrast, here before me on Christmas Day was a direct opportunity to see if 21st Century America really has made itself over for the better.

I feared some off-handed remark grinding the proceedings to an awkward screeching halt, but was glad that this did not come to pass. If Americans approach their own metaphorical Christmas table the same way, I believe now that it can share a meal and delight in the unique qualities and perspective of all who are present. This kind of optimism is often out of character for me, and those who know me well can attest to it.

While we achieved nothing particularly earth-shattering in three hours of sometimes fascinating, sometimes ribald storytelling, I am again reminded that the healthiest, most respectful gatherings are often found in small groups which provide the opportunity for intimate settings. There, it is possible to truly know and understand everyone who participates, putting a face with a voice, placing a flesh-and-blood person with his or her own opinions.

The exceedingly large Quaker Meeting I now attend often appears stiff, formal, and cavernous, compared to the small, family-oriented Meeting in my hometown. I have seen organized religion work well, much as I have recently observed the simple comfort of food and fellowship. This is why I still believe. I have seen success in front of me, and now I wish to replicate it in other places.

If what the futurists and predictors say is true, it won’t be many more years before the dynamics, racial and otherwise, of this country are much more evenly distributed. We will be asked to come together for the benefit of every citizen, not just a fortunate few, and I pray that we will take that opportunity as a way to form successful, not dysfunctional community. The societal problems of a new and different time will require an increased spirit of cooperation between each of us. We will need to sit at new tables, and not just once or twice a year.

If we view each other with respect and with a willingness to learn, the transition will be much easier. Should we dig in our heels and retreat back to familiar spaces, the progression will be very difficult. It’s not pie-in-the-sky, not some fanciful wish to say that we have more in common than we may believe we do. Let’s make things easier for everyone and begin our work nurtured in this spirit.
Posted by Comrade Kevin at 10:51 AM