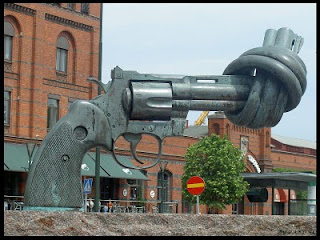 As we move towards becoming a more empathetic society, certain regrettable characteristics must be directly addressed. The eye for an eye sorts would have us believe that we are opting for weakness, regardless of our efforts to establish fairness and equality. The paradoxical ferocity of our impulse for justice would seem to belie these fears, but they still remain in the minds of many. Unless we honestly take stock of how each of us is negatively impacted by a noxious undercurrent of violence, we will only be treating secondary symptoms of a larger disease. In the end, it doesn't really matter how many degrees separate our complicity.

Violence and the threat of violence surrounds us on a daily basis. Indeed, it always has. This impulse can and does take many forms. The mentally unwell vigilante with a handgun often grabs the attention more prominently then the prominent figure who has allegedly committed sexual assault. In this instance, even if Julian Assange is innocent of the crimes of which he has been charged, there is nonetheless a tragic precedent present of undercutting or severely discounting similar allegations in similar circumstances. As we opt for empathy, we are torn between the noble impulse to see the humanity within the criminal and our stubborn persistence for just punishment. These need not compete with each other, but the news media favors counterpoint above commonality. Splitting is well and good for those with personality disorders, but I would not highly recommend it to the average person.

Feminists, particularly Third-wave Feminists, have long sought to publicize such matters themselves, particularly when others consistently drop the ball. Detractors sometimes consider their efforts overkill and redundant. But as a means of comparison, do consider this brief anecdote. The British director Lindsay Anderson, a personal favorite of mine, was regularly raked over the coals by film critics. In particular, he received this treatment for repeating the same basic criticisms of UK society in each of his cinematic works. In response, Anderson is reported to have said something to the effect that while he acknowledged their observations, he wouldn't have bothered, except that the country was still f**king doing it!

If we were honestly willing to commit to the soul-searching needed to purge ourselves of institutional violence, if you will, much would need to be contemplated. We'd need to analyze every childhood taunt, every fistfight, every betrayal of trust, every instance where we entered, no matter how briefly, a gray area somewhere between right and wrong, and every rationalization we made to excuse ourselves for doing so.

Faith traditions far more Calvinist than mine borrow freely from the Gospel of John on this subject.

For you are the children of your father the devil, and you love to do the evil things he does. He was a murderer from the beginning. He has always hated the truth, because there is no truth in him. When he lies, it is consistent with his character; for he is a liar and the father of lies.

I myself do not feel comfortable viewing the world in such terms. Above is one particular way to try to understand a particularly crucial part of human behavior. And I find that every group, religious or otherwise, points back to one particular concept to explain why. Some call it male privilege or Patriarchy. Some call it symptomatic of a fallen world. Some cite the presence of trauma earlier in life or look for a lingering, chronic illness. Some scrutinize the latest scientific finding and process of the body. I think there's much truth in each of these, but I can't help but think that there's something even more basic present. The answer we seek is in front of us, and I wonder what the passage of time will reveal. Each of us attacks the problem from a slightly different direction. Now our knowledge is partial and incomplete, and even the gift of prophecy reveals only part of the whole picture! My faith in eventual progress has not dulled with time, no matter how much I may doubt it at times.
Posted by Comrade Kevin at 7:29 AM