The Fallacy of Privileged Activism 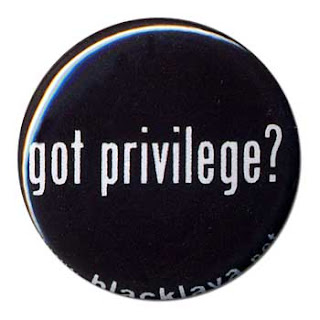 I think what concerns me most about American society these days is how so many wish to commodify everything, especially other people. The subject has weighed heavily upon me recently because I’m going to get married fairly soon. I’ve been reflecting back upon the history of those I’ve dated as a means of judging larger trends in my development. There were a few instances where I was valued more for my potential net worth than for my heart. It is one thing to see the possibility of personal growth in a partner, but it’s another thing altogether to see them as a stock portfolio which has yet to mature. People are not savings bonds or bank accounts. The dreams of some involve the acquisition of funds, and to them, marriage is the perfect merger between conglomerates. “Our” dreams are, in fact, “my” dreams with your financial assistance. Woe be unto those whose economic star does not rise.

On a different, but related note, news broke a few days back about prescription abuse in New York’s Medicaid program. Oxycontin, a potent painkiller, had been finding its way onto the black market. Patients prescribed the drug would then sell them a dealer who turned a profit from illegal distribution. The immediate response from the peanut gallery was predictable. I read the comments of a poster who referred to Medicaid recipients, and in these exact words, as little more than trash. As a person who relies and has relied on Medicaid, I believe I may have to beg to differ here. Moreover, when media stories are framed in this context, they reinforce prejudicial attitudes and lead to this sort of bigoted talk. Though it may be helpful to know exactly how many millions of dollars are being wasted in this case, so to best implement necessary reforms, seeing the bigger picture would be far better.

The problem with any kind of fraud along these lines is rarely as simplistic as an amoral underclass milking the system dry. Any number of unethical doctors have been known to write prescriptions for patients who fully intended to abuse them, and with the doctor’s full knowledge of said fact. Those with particularly ample means can usually get whatever they what, and the sad example of Michael Jackson is only the first that comes to mind. Yet, when it’s a respectable middle class attorney with an Oxycontin addiction, regardless of how he gets his supply, we call it a tragedy, and the transaction itself a white collar crime. I have no doubt that drugs make their way onto the streets in all sorts of ways, even through those who have stellar private carrier plans.

To many, poor citizens are merely a dollar sign followed by a series of numbers. We care more about how much money it costs to provide them health insurance and other basic services than their humanity. Now that we are in the Christmas season, it might be time to consider the Ebenezer Scrooges in our midst. Our job lives and the relationships present there are increasingly based on attaining something we want or need by providing something to someone else. We easily take our work home with us and into every sphere of our lives. When this mindset begins to take the place of human love and compassion in our romances and interpersonal relationships, then we lose something of our humanity.

And even when our hearts guide us to do the right thing, we neglect to see the basic needs of those who we stride past on a daily basis. The homeless person can be reduced to a dollar amount, just as the latest victim of an international humanitarian crisis can live on a certain number of pennies a day, provided we give of what we have. The tax write-off may be more valuable to us than the satisfaction of assisting someone else. It is quite possible to have our hearts in the right place, but to miss the point altogether.

Many of us from middle- and upper-income backgrounds have been socialized to believe that it is our duty to make a difference, but undertake such efforts abroad -- where the "real" poor people are. We found nonprofits aimed at schooling children all over the globe while rarely acknowledging that our friend from the high school football team can't afford the same kind of opportunities we can. Or we create Third World bicycle programs while ignoring that our lab partner has to travel two hours by bus, as he is unable to get a driver's license as an undocumented immigrant. We were born lucky, so we head to the bars -- oblivious to the rising tuition prices and crushing bureaucracy inside the financial aid office.

I know from whence I speak. As an undergraduate at Barnard College from 1998 to 2002, I felt a deep sense of commitment to "making a difference." I volunteered in a Head Start program in Harlem, protested the treatment of Amadou Diallo and Mumia Abu Jamal, had internships at the American Civil Liberties Union and the Children's Defense Fund, even studied abroad in South Africa where I taught poetry classes in a township high school. I was basically the poster child for privileged do-gooderism. But I didn't once consider taking action to ease the financial struggles of my peers at school, didn't once seek out a movement in my midst that might tackle the economic disparity in my own dormitory. I regret that.

I did not come from such a background, though I now routinely come in contact with those who did. It was not until I left home in the South and settled on the East Coast that I became aware of this altruistic desire, which is misguided more than it is directly harmful. I do not assign blame, but I do know that until it is challenged, wave after wave of crusaders will set sail for faraway lands, learning valuable life lessons while ensuring that other generations will have the privilege, too. I do not seek to denigrate the service of those with pure hearts and noblest intentions who believe in addressing societal maladies in places far less advanced than ours.

But I do also know that successful strategies for tackling complex problems requires an advanced, holistic understanding of poverty and need. If we are Americans, we have a greater comprehension of the way our culture is put together. This would be lost if we uprooted to another part of the globe to do our good work. Still, I do know that it is important to have a fish out of water experience, one gained from being abroad for an extended period of time. It is very helpful to recognize how our country isn’t the center of the universe. But if we see similar problems at home as stealth and invisible, the solutions we implement will always be incomplete elsewhere.

Below is a familiar passage to many, though this translation is quite different from others which have come before it.

Love is always patient; love is always kind; love is never envious or arrogant with pride. Nor is she conceited, and she is never rude; she never thinks just of herself or ever gets annoyed. She never is resentful; is never glad with sin; she’s always glad to side with truth; and pleased that truth shall win. She bears up under everything, believes the best in all. There is no limit to her hope, and she will never fall.

Change is not unfeasible, but class-based attitudes often get in the way. As Martin point outs, expanding equality will be its own reward. Assuming it were done properly, there would be no need to vent about welfare cheats or homeless people sleeping on park benches. We would have ripped the problem up by the roots, which is the only way any issue that confounds us will ever be set aside forever. But it starts with us. We are people of great fortune and with fortune comes great responsibility.
Posted by Comrade Kevin at 8:26 AM