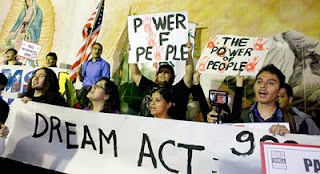 Immigration reform is needed, but it would be foolhardy to suggest that the DREAM act satisfies the requirement. It would seem that we have entered a new era of protectionism. Perhaps we should revive the quota system while we are at it. Though exact numbers will not be regulated, immigrants allowed to attain formal citizenship will be sharply curtailed. Each subsequent revision of the original bill adds hurdles to what will be a lengthy, tedious process of measured steps to follow. The act makes it plain that the process towards citizenship will unnecessarily protracted. The only immigrants allowed the formal right to be called Americans will be high achievers. Granted, good old fashioned Americans can be lazy, unproductive, and not of high moral character, but not illegal and deportable aliens, as the wording of the bill itself reads.

In a country which has long defined itself as a nation of immigrants, this degree of scrutiny seems excessive and contradictory. In this age, we barely trust ourselves, so I suppose it's unsurprising that we'd need trust benchmarks to be met before we'd let anyone different into the inner sanctum. We live in a country that has no concept of individual delayed gratification these days, except for those we can't quite perceive as like us. Apparently, the application process for the melting pot takes longer these days, and requires you have enough money for an appeal if you can't quite assimilate to someone else's satisfaction.

The military service requirement is perhaps the most troubling section of the bill to me. In part, this reflects my own pacifist sentiment, but my moral objections go beyond one specific position. To wit, immigrants requesting citizenship must enroll in a college or university to attain a degree, or serve in the armed forces for two years. As the late comic Bill Hicks put it, I think we may be out of ideas on this planet. The Roman Empire conscripted non-Romans who lived within its massive boundaries to fight its wars of empire. Armies similarly comprised of mercenaries from low or foreign birth have much historical precedent. I can even see a time where American citizenship might be extended to all willing to fight for the privilege.

To show the progression of this basic idea, allow me to briefly reference a few pertinent sources. A article written five years ago about the immigration process reads,

Can people who lack green cards join the military?

Whether Congress and the military will relax its position in the wake of falling recruiting numbers remains to be seen.

The rationale, at first, was that if one was over here illegally, he or she ought to register for at least the possibility of military service. That seems a bit counter-intuitive to me, since if a person is not in the United States legally, why would they want to call attention to that fact by filing paperwork? One could be deported at any time, for any reason, so why expedite the process? Being cannon fodder on the front lines is acceptable, but taking our jobs while draining our coffers is not. It doesn't make that much sense to me, but then again, I tend to challenge myself to see everyone as a human being, not as a means to an end.

So is this the first step towards building up flagging numbers in our military? An immigration bill of 2007 would seem to support that conclusion. My reservations pushed aside once again for the sake of argument, if I saw military service for undocumented aliens as something more than Machiavellian, I might not be so concerned.

WASHINGTON -- A little-noticed provision in the proposed immigration bill would grant instant legal status and ultimately full citizenship to illegal immigrants if they enlist in the US military, an idea the Pentagon and military analysts say would boost the Pentagon's flagging efforts to find and recruit qualified soldiers.

I can't think of a single conflict that wasn't a rich man's war and a poor man's fight. Since the Senate version of the bill only extends citizenship to those under the age of 30, this further reinforces the more cynical aspects of the presumptive act. In literature, Voltaire's Candide shows its young, impressionable title character being brutally pressed into service by Bulgar recruiters. He is then savagely beaten, nearly executed, and forced to participate in a major battle between the Bulgars and their sworn enemies, the Abares.

The Twenty-Sixth Amendment to the U.S. Constitution was itself a product of wartime. Young activists rightfully pointed out that it was patently unfair to involuntarily force a person to serve in combat if that person was unable to determine, by casting a ballot, the fate of the politician whose own vote put lives in harm's way. We give native-born American citizens this basic right, but those eager to win citizenship are deprived of any recourse on this subject. As currently drawn up, it would take a full decade before the process would finally, mercifully draw to a conclusion. It strikes me as profoundly sad that a person can take a bullet for a country and serve under the flag of a country, but still not be given the same opportunities in peacetime. If we were Switzerland, a country proud to ensure that its unique culture not be sullied by outsiders, then that would be one thing.

Instead, we are still a great experiment in Democracy, as I was led to believe at a young age. I place particular emphasis on "experiment", since at no point could we be considered a completed masterpiece. But being that we are in the process of creation, even now, we must still form, and continue to form, a more perfect union. If I believe the United States is exceptional, it is not because I find it to be the new Promised Land, nor because I think that it is inerrant. But in few other places in the world are we allowed to try something new without the encumbrances of tradition. We must decide once and for all who we really are. Though I may disagree with where we are heading, I know we have the ability built into our system and into who we are for us to dare to think differently.
Posted by Comrade Kevin at 8:32 AM