Wrestling with One's Own Private Angel 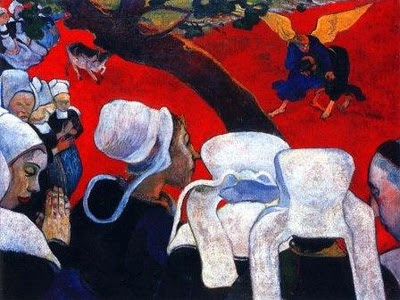 It's easy to be skeptical of those who find faith in times of crisis. For eons it's been a convenient excuse for the guilty to limit time in jail and for charlatans to swindle the trusting. When times get tough for everyone, faith gatherings swell to record proportions. I myself have returned to religion when feeling overwhelmed and troubled. Still, beyond the selfish and the immediate, I have always believed in the importance of faith in one's life. Though I might have been more inclined to seek audience with God in bad times, I desired more than a panacea in my presence there. Even when a little boy, I found something calming, moving, and appealing about worship.

Having prefaced where it is that I'm coming from, I will say that, for me, I renewed my belief in God after emerging from a terrible manic episode. Once the mania finally left my body, I took stock of the illogical, eccentric things I had done and said to others. The shame and the guilt were tremendous and crushing. Mania peels off layer by layer, slowly, slowly. In the beginning of my in-patient stay, I was too ill to able to entertain sanity, but at the end, aghast is the only adjective choice I can think of to describe my feelings. Humiliated might be a close second place. In the middle of a three-week hospital visit, I attended every Sunday service I could manage. A Catholic priest came by to visit us, as we were too sick to go out on pass, and no chapel existed on site. Though his faith and mine differed considerably, he was notably careful to trod a middle ground and not neglect anyone's particular faith. Although, I have to say he wasn't quite sure how he ought to address a Quaker, but I never complained.

After discharge, I spoke at much length to my ex. She said, After all that happened to you, how can you still believe? I see from whence she was coming, but I also know that a power greater than myself kept me alive and fighting. Some people give in to the constant, demoralizing drain of another day's wrestle with depression. When days and days with no relief pile up, one eventually reaches the conclusion that if this is "life", then why even live. When the accomplishments of a day are often little more than having successfully showered and perhaps even cooked a meal for oneself, then it's not always easy or possible to hold out for better days. Your energy and enthusiasm are the first to go.

Following that, your ability to perform even basic tasks most of us take for granted melts away, bit by bit. Death becomes an option, and though you may push it to the side with all your will, it keeps surfacing and surfacing. And as your eyes open, as the dull ache monotony of another day awake in the morning arrives, knowing what will follow for the next several hours, one becomes an architect. One draws up blueprints, making sure every i is dotted and t is crossed. It's astonishing how creative people become when matters of life and death consume. By the end, your plan of action is the envy of any army general or civil engineer. There's nothing much else to do. Might as well succeed at something.

This could have been my fate, but it wasn't. I'm very lucky and never forget it. And while on the subject, my mind always returns to one familiar story in the Bible. In my boyhood, before my illness surfaced, before I accrued enough life experience to fully understand, it was one of my favorites. I think that its novelty was appealing to me in younger days. Now it has a very different meaning.

This left Jacob all alone in the camp, and a man came and wrestled with him until the dawn began to break. When the man saw that he would not win the match, he touched Jacob's hip and wrenched it out of its socket. Then the man said, "Let me go, for the dawn is breaking!" But Jacob said, "I will not let you go unless you bless me."

Then the man said, "Your name will no longer be Jacob, but Israel, because you have struggled with God and with men and have overcome."

Posted by Comrade Kevin at 9:47 AM