The Definition of Robin Hood Depends on Who You Ask 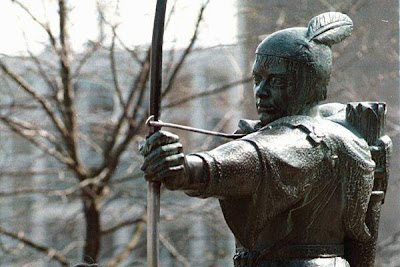 Vince Gray's election on Tuesday night as mayor of Washington, DC, was met with a curiously nonchalant response among city residents. No one seemed much inclined to celebrate. A city that is famously buttoned-up and all business, all the time, was precisely that. The prior mayor, Adrian Fenty, was widely seen as a temperamental prima donna, but this election was less a vote about specific District issues as it was a referendum on his leadership. The results, a decided victory for Gray, were a backlash among many towards Fenty's perceived stance in favor of more affluent parts of town, particularly those in the Northwest quadrant of the District. This is far from an uncommon phenomenon.

Complicating matters considerably is how city government functions. Washington, DC, was originally set up to belong to the entire United States rather than be an autonomous unit or part of any existing state. This is why much of its governance even today is a patchwork, nightmare system of powers shared between Congress and city government. Not quite a city, nor a territory, the District is distinctive from the rest of the country. In keeping with original intentions, most avenues bear the names of the states in the Union in existence when the L'Enfant plan for the city was implemented in 1895. It wasn't until 1975 that the city was governed by some semblance of Home Rule and given the ability to popularly elect a mayor and city council. The Founding Fathers wanted a separate federal capital to prevent a mob attack as had occurred in Philadelphia in 1783, and to this day, opponents and supporters of statehood wrestle with the real intent of those who debated and drafted the Constitution.

DC is certainly a unique place in other ways. This is, after all, the city who re-elected Marion Barry to four full terms as mayor and retains his services even today as a member of the council. Despite a widely publicized sting operation that showed him smoking crack in a hotel room, with a resulting trial, conviction for drug possession, and six month stay in prison, Barry is still beloved by many. His shortcomings as a person are excused primarily because of his desire to balance city services between the wealthy and the poor. Yesterday, I spoke briefly to a worker in the DC government, who stated again the views of many. Namely, that the former mayor insisted upon parity. "If they got computers and up-to-date facilities, we did too," he said. By "they" he meant the wealthier sections of the city. The worker was understandably bitter about a hiring freeze that created long lines and waits for city residents and an overwhelming amount of extra work for him. It's not easy to see brand new buildings being thrown up in other parts of town when one has to make do with a workplace which had seen much better days.

Resentment drives voters as much as it drives candidates. In my home state of Alabama, George Wallace made sure to keep country roads paved and established an extensive system of two-year-colleges in small towns. He courted the rural votes heavily, since those ballots were most needed to keep him in power. By contrast, he was often contemptuous of the cities and their "liberal" attitudes. The largest metropolitan area, Birmingham, for example, happened to be one of the last places in the state to see construction of the Interstate Highway System because Wallace faced the most opposition there. Despite fanning the flames of racism and segregation, Wallace won race after race, though he was likely guilty of widespread voter fraud on at least one occasion, and not averse to playing Rovian dirty tricks.

A generation before, Louisiana Governor Huey Long took this path.

Long began an unprecedented public works program, building roads, bridges, hospitals, and educational institutions. His bills met opposition from many legislators, wealthy citizens, and the corporate-controlled media, but Long used aggressive tactics to ensure passage of the legislation he favored. He would show up unannounced on the floor of both the House and Senate or in House committees, corralling reluctant representatives and state senators and bullying opponents. These tactics were unprecedented, but they resulted in the passage of most of Long's legislative agenda. By delivering on his campaign promises, Long achieved hero status among the state's rural poor population.

To skip across the pond for a bit, the Kray Brothers, Ronnie and Reggie, were organized crime heavies back in the Fifties and Sixties. They were brought up in the economically depressed East End of London, an area well-known for its poverty and crime. Courting the limelight, they rubbed shoulders with notable celebrities of the day, and among East End residents, they could do no wrong. To this day, some will still defend their actions, which involved armed robberies, arson, protection rackets, violent assaults including torture, and murder. This is because they made sure to give back to the community, usually in the form of money. Complicating matters was Ronnie Kray's open secret bisexuality, which took the form of sexual relationships with at least one Member of Parliament.

Sly, cunning, shrewd politicians are always quick to set themselves up as Robin Hood. We can debate their merits as moral, ethical human beings whether it be in their personal conduct or business dealings, but those never delegated their fair share for any reason will be grateful for whatever they can get. We do the judging part well, due in part to our Puritan ancestors, but we also hold ourselves and everyone else to an impossible standard. This doesn't mean that we shouldn't insist upon common decency, but instead that we have a hard time seeing our heroes as human. We say that no politician should be above the law, but when one who represents our beliefs steps across the line, we often find ourselves in a distressing gray area. No one doubts the challenge of standing up to wealth and powerful or the benefits of an alliance with the deep-pocketed, but if we truly wish to win any war on poverty, we should begin here.
Posted by Comrade Kevin at 6:34 AM