The Myth of Scarcity, The Reality of Abundance 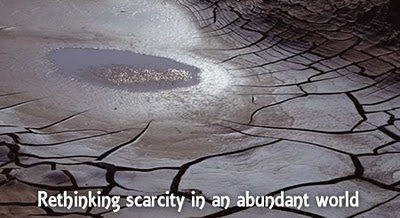 One of the most famous passages in the entire biblical canon begins this way.

The Lord is my shepherd, I shall not want.

And yet, wanting more, desiring more, being fearful that what we have will soon leave us, these anxieties are responsible for so much evil in the world. The myth of scarcity influences our decisions in so many ways. The reality is that we live in a world packed full of abundance, both for good and for bad. And yet, when we believe otherwise, then we respond in ways that are frequently irrational and rarely beneficial. Leaders have a knack for making the nonsensical seem plausible and justified, appealing to the worst parts of ourselves. When we are obsessed with our own demise rather than delighting in the gifts laid before us, we neglect an opportunity to build community with others. This conflict is so integral to the human condition that one can see examples of it everywhere, especially where power and acquisition are of paramount importance.

On this subject, Walter Brueggermann writes,

Martin Nieimoller, the German pastor who heroically opposed Adolf Hitler, was a young man when, as part of a delegation of leaders of the Evangelical Lutheran Church, he met with Hitler in 1933. Niemoller stood at the back of the room and looked and listened. He didn't say anything. When he went home, his wife asked him what he had learned that day. Niemöller replied, "I discovered that Herr Hitler is a terribly frightened man."

Because Pharaoh, like Hitler after him, is afraid that there aren't enough good things to go around, he must try to have them all. Because he is fearful, he is ruthless. Pharaoh hires Joseph to manage the monopoly. When the crops fail and the peasants run out of food, they come to Joseph. And on behalf of Pharaoh, Joseph says, "What's your collateral?" They give up their land for food, and then, the next year, they give up their cattle. By the third year of the famine they have no collateral but themselves. And that's how the children of Israel become slaves -- through an economic transaction.

It would be easy to reduce this anecdote down to yet another Nazi reference for the sake of making an irrefutable point. I include it here somewhat reluctantly because of the prevalence of Godwin's Law in arguments like these. Still, it explains well a multitude of matters which have always been in hot debate throughout the centuries, and, of course, right this minute. That so many adherents to the scarcity myth can be found throughout the ages strikes at the heart of the most common human phobia: death. This may not necessarily refer to physical death, of course. It could also speak to the nagging worry that our bargaining power will be no more, or that our influence over others will cease to be. No one wants to be irrelevant to the discussion. Many have sought to increase their own exposure and stature by the skillful application of scarcity mythology, often to the detriment of everyone but themselves.

If we are Americans, we live in a country of abundance, often bordering on outright excess. I read an article the other day talking about the successful financial strategies of the trendy grocery chain Trader Joe's. One of the reasons the company has made lots of money is that it greatly reduces the number of available food choices. It can then cut down on the need for additional storage space. It was also discovered, through market research I assume, that people feel conflicted about what to purchase when, for example, there are over twenty different brands of peanut butter from which to choose. Trader Joe's reduced this number to three or four, limiting customer anxiety in the process. Only in a nation of abundance would this ever be an problem.

When the children of Israel are in the wilderness, beyond the reach of Egypt, they still look back and think, "Should we really go? All the world's glory is in Egypt and with Pharaoh." But when they finally turn around and look into the wilderness, where there are no monopolies, they see the glory of Yahweh.

In answer to the people's fears and complaints, something extraordinary happens. God's love comes trickling down in the form of bread. They say, "Manhue?" -- Hebrew for "What is it?" -- and the word "manna" is born. They had never before received bread as a free gift that they couldn't control, predict, plan for or own. The meaning of this strange narrative is that the gifts of life are indeed given by a generous God. It's a wonder, it's a miracle, it's an embarrassment, it's irrational, but God's abundance transcends the market economy.

This is faith itself. Trusting in a higher power beyond ourselves is difficult for many people. It involves letting go, when many people have made whole careers or built a whole persona on the premise of authoritarian control. Likewise, many occupations require regimented steps to be followed in linear sequence, each building steadily to a desired result. It is a very human tendency to covet and hoard, but striking a balance between trust in God's plan for us with our own obsession to be lord of the manor is what is needed most. Otherwise, we will never live in peace with our neighbors, or at least not for very long. God will not let us down, God always has our best interest at heart, and though his ways are often mysterious and perplexing, they are never imprecise or unclear. We stumble when we expect to see this wisdom and guidance through conventional channels. Dramatic, awe-inspiring signs may not always be present, but sometimes the most spiritually moving experiences are present in the otherwise yawningly sublime.

We end up only with whatever we manage to get for ourselves. This story ends in despair. It gives us a present tense of anxiety, fear, greed and brutality. It produces child and wife abuse, indifference to the poor, the buildup of armaments, divisions between people, and environmental racism. It tells us not to care about anyone but ourselves -- and it is the prevailing creed of American society.

Wouldn't it be wonderful if liberal and conservative church people, who love to quarrel with each other, came to a common realization that the real issue confronting us is whether the news of God's abundance can be trusted in the face of the story of scarcity? What we know in the secret recesses of our hearts is that the story of scarcity is a tale of death. And the people of God counter this tale by witnessing to the manna. There is a more excellent bread than crass materialism. It is the bread of life and you don't have to bake it. As we walk into the new millennium, we must decide where our trust is placed.

We have all the tools, experience, merit badges, work experience, life experience, publication histories, notable mentions, awards for valor, degrees, and confirmations of competence we need. That which we require most is given away for free, but only if we reach out and accept it. It is no curative promising smooth sailing and liberation from worry, but though we walk through the valley of the shadow of death itself, we will fear no evil. He is with us. Cast your net on a different side of the boat.

One day as Jesus was walking along the shore of the Sea of Galilee, he saw two brothers--Simon, also called Peter, and Andrew--throwing a net into the water, for they fished for a living.

Jesus called out to them, "Come, follow me, and I will show you how to fish for people!"

Posted by Comrade Kevin at 6:21 AM