Why I'm Late in Posting Today 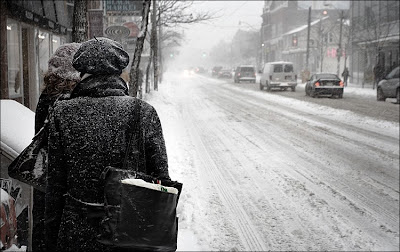 Tonight: Snow, mainly after midnight. Low around 28. Northeast wind 6 to 9 mph increasing to between 14 and 17 mph. Chance of precipitation is 100%. New snow accumulation of 1 to 3 inches possible.

Saturday: Snow. The snow could be heavy at times. High near 30. North wind around 18 mph. Chance of precipitation is 100%. New snow accumulation of 8 to 12 inches possible.

Saturday Night: Snow, mainly before 4am. Low around 28. North wind between 14 and 16 mph. Chance of precipitation is 80%.

Sunday: A chance of snow showers before 1pm. Mostly cloudy, with a high near 34. Northwest wind around 15 mph. Chance of precipitation is 40%.


The wintry precipitation track gives a stripe of heavy snowfall from western North Carolina to New York City, impacting major cities including Washington, Baltimore, and Philadelphia with potentially a foot or more of snow.
________

Christ, now they're saying close to TWO FEET. It really makes me nervous when the media throws around words like "historic" and "major".
Posted by Comrade Kevin at 12:27 PM

Oh yes, I saw it on the news today - we are expecting about 12 inches of snow here - starting around noon on Saturday. I am home, wood piled high by the stove - plenty of hot cocoa, food and wine and our tree sparkling bright and our white lights shining outside and a white candle in every window.
And Kevin? "Merry Christmas"

Merry Christmas to you, Gail!