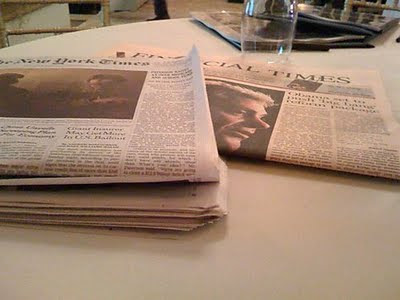 The awkward embrace by which the established media figures are halfheartedly wrapping their arms around their heir apparent reminds me of the uncomfortable John McCain/George W. Bush man hug used so effectively by Barack Obama's campaign. That any mainstream outlet would seek to collar the internet and with it the multitude of online-based means of information exchange, forcing them to march to its own tune in the process surprises me not really all that much. Power plays like these are why the blogsophere has often been contemptuous of the big names. A drowning person reaching desperately for a way to stay afloat would have to be awfully sadistic if he or she, out of pure spite, sought to drag down the very means by which he or she might survive. But then again, no one ever confused the media as being strictly and patently rational. A crisis mentality permeates the thought process of many in these trying times and catastrophe is rarely graced by sensible or conscionable decision making.

The Washington Post, also known as the walking dead, pulled a fast one on just about everybody quite recently. Its Next Great Pundit Contest™ started out with a stated desire to lift some obscure member of the Proletariat blogging class into a temporary, but nonetheless visible role as a Beltway heavy hitter, but was shiftily transformed from beginning to end to showcase an "average" member of society who happened to have a substantial publication history and at least one book in print. The winner was highly competent but also the safest choice the company could have ever made. And not only that,

...in this contest, as in much of new media, though over 50% of bloggers are women, the opinion sections at some of America's most respected online publications continue to be dominated by men. Between August and October of this year, only 20% of the Huffington Post's front page opinion columns were written by women, a proportion that dwarfs the corresponding number at Salon, which was a mere 12%.* The primary consumers of new media are young people, a Twitter-crazed generation raised in the post-feminist era, many of us too young to remember Katie Couric as anything other than a serious prime time anchor. So why, when it comes to pundits, does new media look so much like old media?

My response, in part, is this. Any industry in turmoil is going to aim for the lowest common denominator, because it is averse to take a risk. In better days, struggling companies might have taken the opportunity to invest into something off the beaten path that conventional wisdom might question or that didn't have a history of a guaranteed rate of return. Those days, lamentably, no longer exist. One sees this in the newspaper business and one sees this also in the music industry. One of the more gaping flaws with capitalism is that there is always a temptation to view everything, no matter of its quality, in terms of a commodity or in terms of turning a guaranteed profit; I also know that social progress will always be impeded by the pursuit of the bottom line.

Any historically marginalized group, provided they speak with enough of a unified voice and demand their right to be heard is often thrown a cheap concession in the form of a specific platform upon which to be heard as a way to get activists and reformers to stop applying pressure and in effect, to shut up. Traditionally the addition of a token member promoted to a high level from within has been an easy way to satisfy protesters, and so also has been the creation of a specific publication to best serve the interests of those who have historically been denied a voice. As a noted intellectual put it, what has been set in motion up to this point could well be described as The Triumph of Tokenism. This could never be confused as true equality, but it is often embraced as "at least a start."

In 1966, the scholar whom I reference above, historian C. Vann Woodward, wrote a provocative essay entitled "What Happened to the Civil Rights Movement?" The opening two paragraphs have an eerie resonance to the present day. Woodward was specifically writing about the struggle for African-American rights, but they fit this context neatly.

As if adopting the techniques of the cinema director, history has obligingly thrown in a few flashbacks or replays of hauntingly familiar lines, encounters, whole episodes from the past. It would seem at times, in fact, that contemporary history has been plagiarizing an old scenario and helping with the script.

With all due resistance to superficial parallels, we have been unable to to avoid comparisons between past history and lived experience. For we have witnessed in our own time a rising tide of indignation against an ancient wrong, the slow crumbling of stubborn resistance, the sudden rush and elation of victory, and then the onset of reaction and fading of high hopes.

So it would seem then that demands for equality must be measured against the course of events as established by some sort of equilibrium we can sense but have a difficult time observing viscerally. But neither, of course, does this mean that revolutions of all sorts are unnecessary or need not even be attempted. Even if the ultimate end is that of discouragement and disillusion, this does not mean we ought not to start the process over again. Perhaps we should assume that the life cycle of movements and issue activism is beholden to ebbs and flows by its very intrinsic nature and thus we ought to prepare ourselves for the nascent battle charge in the same breath as we acknowledge our retreats and the re-entrenchments of our opponents.

Historians have their arm chair consolations, of course, their after-dinner ironies with brandy. We knew all along, or so we inform the young and ill-tutored, that all revolutionary upheavals have their life cycle: rise, climax, decline, reaction...We knew all too well--and the knowledge always embarrassed encounters with true believers--that high fevers of idealism and soaring moods of self-sacrifice cannot be sustained indefinitely, that they lag and burn themselves out, that disenchantment and self-doubt inevitably set in. And one could expect from past experience that extremists from both ends would take over and make common cause against the rational means.

This passage has parallels to our day that go well beyond gender inequality. I think what is most crucial is the understanding that revolution as strictly defined doesn't necessarily mean armed revolt and establishment of a brand new way of conducting one's affairs. Sometimes the most subtle revolutions are the most influential and the revolutionary power of the internet is one of these. The internet reveals both the best and the worst of humanity and I choose to observe the best while taking care not to be dragged down by the latter.

I prefaced this piece by quoting the Huffington Post article written by Chloe Angyal, who concedes that even though the deck may be stacked against female contributors to media, a certain amount of persistence is necessary to overcome it.

...[W]e -- young people, and especially young women -- can do better. New media, despite its distinctly old-fashioned start, still represents an enormous opportunity to shape for ourselves the kind of public discourse we want to have. It is from our ranks that America's next great pundits should come, and it is our responsibility to support them when they do. Furthermore, new media represents our chance to genuinely participate in changing the face of our nation's public discourse. The men to women ratio of submissions to the Washington Post contest was eighty-twenty, a distinctly old media proportion. Young women can and must do better than eighty-twenty. It's time for us to change the conversation. It's time for us to sit down, log on and be the change we so desperately need to see in the world.

Reform of any kind is a two-way street upon which seeking a scapegoat isn't nearly as effective or necessary as positive action. Far too often our cynicism gives way to a self-fulfilling prophecy of ultimate defeat. Ultimately we will have hard times, but we will also have times of inspiration and great success as well. One of my favorite sayings is that life never promises us that it will be fair, but it does promise us that it will often be good. Finding that which is uplifting and satisfying is our role and ultimately our decision. Businesses rarely make decisions based on faith or on intangibles. In the cold, hard world of numbers, graphs, charts, and raw data, nothing is left to chance and nothing exists without some undeniable proof to back it up.

Yet, some of the most innovative reforms and products required leaps of faith to set into place, even when the safety net below might not have been several reassuring glances downward. Irrationality in any form is foolish, but rationality and trusting in the unknown and even the unknowable are not mutually exclusive concepts. If none of us were willing to risk potential loss and relied exclusively on the status quo, slavery would still be legal in at least half the country, women would not be welcomed into the workplace, LGBTs would be treated with scorn and contempt by most Americans, and we would dwell in a world exclusively of the white males, by the white males, and for the white males.
Posted by Comrade Kevin at 8:30 AM