Draft Board Realities and Gender-Based Arguments 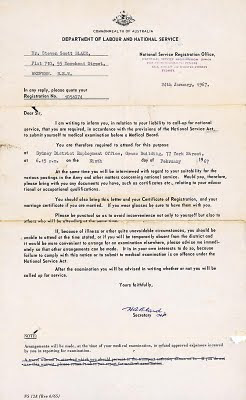 This post is written in response to a very well-crafted argument against the resumption of military conscription. What I will say is that I have engaged in hypothetical discussions at times about what the resumption of a draft would produce in reality, versus what goals and reforms we might assume would transpire as a result. I'm not entirely sure that I agree that those who advocate the return of conscription are making specious or at best hypocritical arguments. Though I am opposed to war in all forms, one cannot disagree that war shapes so much of our consciousness and influences who we are as both Americans and humans to a degree that we are sometimes unaware of its complete impact. War and warfare is that pervasive and it is that enmeshed in who we are as a people that merely criticizing it from the outside may not simply be sufficient.

In another online forum, I suggested that perhaps if women were included in the draft that their presence might successfully overturn gender-based inequalities and begin to reform Patriarchal excesses. A previous generation of Feminists believed that the way to be recognized as the equals of men was to de facto refine the idea of masculinity by building it into its own image and idealized notion. Feminists of today have taken special care to embrace their femininity and sex while simultaneously redefining both in an effort to also reshape repressive ideas of masculinity and manhood. Gender as a social construct has become especially problematic to many, since transgender and intersex rights have turned conventional gender norms and gender arguments completely upside down. If applied to current draft regulations, it could easily raise a huge to-do.

The truth of the matter is that if a draft were resumed today, only men would be drafted. My argument, which again was set forth purely as food for thought, was that if women wished for full equality with men then they ought to seriously consider lobbying to be included as part of the process. My rationale for this was that women have for far too long been seen purely as keepers of the hearth and home and that their presumed status solely as nurturing figures and caregivers is restrictive and based on assumption, rather than reality. Another huge can of worms that goes along with this is that if Don't Ask, Don't Tell were ever to be revoked and if LGBTs were allowed to serve openly in the armed forces, the draft laws as written would apply to gay men, but not to lesbians. One gets in thornier territory than that when the question of trans men, trans women, and intersex individuals enters the picture. When we are only now beginning to confront the fact that what constitutes "male" and what constitutes "female" is far more fluid than any of us could have ever before believed, then we see what happens when the gender binary falls unforgivably short.

I seek not to seem ignorant or unaware of draft board realities. My own father did not serve in Vietnam because of his high draft number. By sheer luck, the highest number called for his group was 125 and, since the system focused on date of birth to determine draft status, his announced number 215 worked out in his favor. Still, Dad was labeled 1-A (available for military service) and taking no chances he continued to pursue a college degree and served for a time as a state trooper, since both of these options made it unlikely that he would be forced to serve in combat. I do recognize that if those times were our own, then as now, those unable to afford college or so poor that they could not use the privilege of middle class or upper class affluence to their benefit, advantages that most of us take for granted---they would be the first to go. My grandfather used his business connections with the people at the local county draft board to ensure that his sons did not go to Southeast Asia. In business, in politics, and in all of capitalism, ultimately it comes down to precisely who you know.

Assuming the draft was (God forbid) ever resumed, perhaps a brand new group of underprivileged souls would be sent off to fight and die. It's not as though gay men live and are born only in affluent cities, states, or regions. Nor is homosexuality a phenomenon relegated purely to Whites. Perhaps the recent transitioned trans man, fresh from top surgery finds zirself for the first time as a prime target to be forced to fight for a country that still hasn't quite acknowledged the unique struggles of transgenders. One would hope that if this situation were ever to come to pass that it would not force trans men to be disinclined to undergo the process of claiming a gender of which they were not assigned at birth while desperately seeking to feel authentic to who they are inside. One would also hope that resentment would not build within the gay community due to the unfortunate fact that gay men could be sent off to die but gay women could not.

One now understands why Don't Ask, Don't Tell, for all its flaws, is still in force. But I do understand my history, as well, and I know that the Twenty-Sixth Amendment raised the uniform voting age in this country from 21 to 18. A compelling argument raised by young Vietnam War Protesters, which stated that young men who were being drafted and sent to die in the jungles were without the right to vote in or vote out the legislators who were in charge of making that awful decision---this push led to resolute action. Quite unlike the legislative logjam we are now facing today in other reform measures, the process of enactment and ratification was not a particularly contentious one and it didn't take long for the amendment to take effect. When I consider today how many eighteen to twenty year olds only vote when the name Obama is on the ballot, it really makes me sad. Yet, at least that right exists, and at least combined effort towards good produced satisfactory results. We might learn from that when it comes down to pushing our own unique ends and aims. If we are going to increase the scope and span of conscription, an act so unfair and so completely unjustified as to border on complete evil, perhaps we might be forced to learn some lessons and to confront the hypocrisies that don't merely influence some, but influence all.
Posted by Comrade Kevin at 1:18 PM

Anonymous said...
This comment has been removed by a blog administrator.
12:53 AM CST