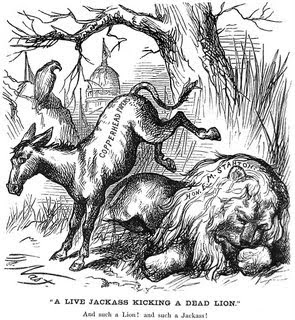 Having passed a long-overdue Health Care Reform Act, expect the media to dust off long-composed narratives it kept in cold storage until this point. The instant President Obama signs the bill into law in a massive ceremony full of important people, flashbulbs, and saturation coverage, there will be many who will seek to make the gravity of the event better understood by means of analysis and interpretation. Contrary to what some may write, I am not entirely convinced that Health Care saved Obama's Presidency, though it would certainly have removed the last of the luster around him had it failed. There will be many contentious fights to come, but the passage of the bill will likely limit GOP gains in next year's Mid-Congressional election. It will provide momentum to force through other reform measures and will be a face saving device to aid vulnerable incumbents. But like much of politics, the ultimate impact of it all is indebted to future understanding and events yet to come, of which none of us is privy.

Also to be found in copious quantity are the requisite gross of stories lamenting the end of good cheer among legislators of different parties. One would think that this health care bill has ushered in a golden age of distressing polarity, but it has not. Most people are terrified of change. Many will sign on to change in the abstract, but once the concrete is poured, their opposition hardens. Trusting in the known is much like betting on the favored horse, but trusting in the unknown possibility comes with it 50-1 odds. Most people are not riverboat gamblers, but if they were, they'd often reap the rewards of taking a chance for the sake of positive gain. This truism has no allegiance to party or ideological affinity. Nor is it an American institution.

While the Senate has always been structured to foster some degree of collegiality by its very makeup and its relatively small size, one mustn't let the myth obscure the facts. The Senate may be a family, but it is a strangely dysfunctional one, and the House equally so. This is, we needn't forget, the same collective body where Representative Preston Brooks savagely bludgeoned Senator Charles Sumner with a cane on the latter chamber's floor. At other crucial points in our nation's history, decorum has been replaced by nastiness and I think perhaps our latest group of elected representatives do not remember or have not studied precisely what happens when measures this large and all encompassing are further hyper-charged by massive displays of public sentiment and outcry. Regarding this subject, Senator Orrin Hatch strikes back at us in the blogosphere for daring to hold his feet to the fire as well as the feet of other legislators. We ought to take this as proof of a job well done and aim to keep it going.

I am also not particularly sympathetic to Representatives and Senators who have complained about the extended hours needed to pass this bill. If they had resolved it in a more timely fashion, then this matter would have been dealt with long ago. Republicans have used stalling tactics and obstructionist procedural measures, but as we all knew, the Democratic party itself was the real enemy at work. Attempting to pacify various factions within itself to hold together a fragile coalition is what took so long to reach resolution. Moreover, if this is what it takes to achieve true fairness and equality, I wish they'd be in session every year and even up until Christmas Eve, if needed. It is, of course, true that Senators need to spend a certain amount of time campaigning, raising funds, and observing for themselves the nuts-and-bolts of the policy issues upon which they will propose and vote. However, too often these are excuses cited for not being in session at all, especially when needed legislation is allowed to die a needless death or is tabled in committee with no re-introduction ever intended.

It is true that,

[f]or more than 30 years, the major parties — Democrats and Republicans — worked every angle to transform politics into a zero-sum numbers game. State legislatures redrew Congressional districts to take advantage of party affiliation in the local population. The two-year campaign cycle became a never-ending one.

Politics, however, has always been a game of knees to the groin and leaps to the jugular. When contentious matters and contentious times existed, collegiality was the first thing to be discarded and shed. In times of plenty with few especially pressing matters, then party lines could sometimes seem obscured or unimportant. The so-called "Culture Wars" are a partial explanation for that which we have been facing. In truth, the Republican party began to take a sharp right turn beginning with the Contract with America in 1994 and then culminating in the election of George W. Bush. When Bush played directly to the Republican base at the expense of the middle, this caused a correspondingly swift and sharp reaction in the left wing of the Democratic party, which the Progressive blogosphere correctly considers a call to arms. Returning to the idea of truth versus saccharine sugarcoating, yet again, it is tempting for all of us to invent our own mythology, particularly when it suits our cause, but this is a compulsion we must never adopt for whatever reason may be. The truth will set us free, but freedom is often pricey, especially when we remove it from circulation.
Posted by Comrade Kevin at 9:56 AM