Feeding the Poor: A Tangible Kind of Stimulus 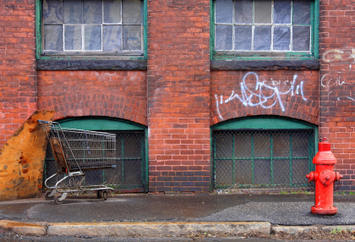 A few weeks back, I wrote about my trials, travails, and tribulations achieving food stamps. I am pleased to report that due to my own persistence and the fantastic support of an advocacy agency, I was granted an EBT card. Earlier today I trudged through areas of town which have not seen much in the way of a plow or a shovel. I literally did have to walk a half a mile uphill in the snow both ways to arrive at the proper place, though I'll save that lecture for another time. Since I have joined the ranks of the unemployed, I've had to swallow quite a bit of pride, which isn't always a bad thing, all told. The complications that went into obtaining food stamps were easily explained, once I met with the proper person, and with resolution I have no further griping to share on that matter.

A well-designed website imploring those wishing to apply for food stamps to submit their claim by mail, after, of course, entering pertinent information and printing out several pages of a lengthy form sounds attractive enough. However, I learned that while the mechanism may exist, budget shortfalls prevented the DC government from being able to hire the workers needed to process internet-based claims. It would not be much of a stretch to deem this situation an glaring example of an unfunded mandate. Reform cannot proceed without the allocation of funds and while we often are curtly dismissive of throwing money at a problem, granting low income citizens the ability to feed themselves somehow doesn't seem to be on par with all of these anti-underclass talking points that find their way into the mouths of Republicans and Republican politicians.

If one considers Maslow's famous hierarchy of needs, then food falls right down there at the bottom of the pyramid. Without the literal requirements for human survival, it's tough to be a Welfare Queen or milker of the system. According to Maslow, it's only after our base needs for survival are met that anyone could ever even entertain the notion to willfully freeload.

With their physical needs relatively satisfied, the individual's safety needs take precedence and dominate behavior. These needs have to do with people's yearning for a predictable, orderly world in which injustice and inconsistency are under control, the familiar frequent and the unfamiliar rare. In the world of work, these safety needs manifest themselves in such things as a preference for job security, grievance procedures for protecting the individual from unilateral authority, savings accounts, insurance policies, and the like.

But until one has the security of knowing he or she will be fed on a daily basis without having to worry about potential financial famine, safety is not a concern.

As for my own situation, my packet of information sat on a desk for over a month, unprocessed. Because a meeting with a claims associate regarding whether or not food stamps will be granted or denied must, by rule, be granted and scheduled within 30 days, once I was approved I was given a month and one week's worth of groceries I should have received earlier had everything proceeded in a timely fashion. Though I received only $200 a month in food stamps, which is approximately half of what my grocery bill is for the same period, I am not about to look a gift horse in the mouth. In all fairness to the DC Food Stamp program, it has won awards for how promptly and effectively it processes claims and while my situation is uncommon, it is hardly unusual when one considers the food stamp programs in other states. In a fairer society, I would have had my entire food budget subsidized, saving me from having to rob Peter to pay Paul as so many of us have to do these days, but perhaps someday we will learn that though we have a tremendous amount of financial resources in this country to go round, even in times of recession, we spread them around unequally and in so doing shortchange the least among us.

Part of the problem is the stigma and the misinformation that still persists regarding accepting government aid of any kind, food stamps being merely one example. One would think that welfare cheats salivate at the very idea of eating from the public trough, if you'd believe the stereotype. DC Hunger Solutions, the advocacy agency who so kindly went to bat for me and got my situation resolved, corrects many of the myths and stigmas surrounding food stamps.

Only 83% of eligible District residents, and 36% of eligible low-income working families, receive food stamps. Every $1 of food stamps spent in the community generates $1.85 in local economic activity. D.C. would gain millions in federal funds by signing up eligible households - funds that would stimulate the local economy. People who work sometimes assume they are not eligible for food stamps, or that time-off from work is required to apply. This is not true. A family of 3 with a minimum wage earner could be eligible for over $3,000 annually in benefits, and working families can complete phone interviews rather than go to the food stamp office in-person.

The true impact of the Economic Stimulus Package has become a political football of sorts, in part because what it promised could not be easily measured or highlighted in concrete detail. If, however, we shifted at least some of the focus towards fully funding both the programs that provide food to the poor and the monies necessary to provide more assistance, then these would be highly visible symbols of what good government is capable of if it puts its mind to it and does not get distracted with superficial squabbling or red tape disasters. When close to two dollars worth of gain comes as a result of every one dollar spent, one cannot overlook the overall benefit. We often believe that reform of any sort ought to be an awe inspiring and highly complicated matter, when sometimes the simplest solutions are the best. Blessed are those who hunger and thirst for righteousness, for they will be filled.
Posted by Comrade Kevin at 1:21 PM