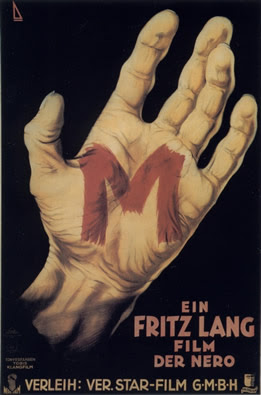 A condemnation of Weimer Republic-era Germany, Fritz Lang's early sound film is in keeping with other works of the period. Ostensibly a thriller about a child murderer, the movie criticizes Germany society as a whole for being immoral, corrupt, and sleazy. Though Peter Lorre's serial killer is a mentally disturbed pervert, his fellow countrymen are hardly any better. In M, one can see why Nazi rule was such an attractive prospect for millions of ordinary Germans. Before enforcement of rigid discipline and the establishment of a police state, organized crime was rampant, society was in a state of moral decay, and government ran inefficiently. The German Expressionist school of directors which included F.W. Murnau, G.W. Pabst, and Robert Wiene among others all explored darker cinematic territory in their works.

After committing a series of sensational crimes, Hans Beckert, the murderer, becomes the focus of an extensive manhunt. The negative publicity and resulting hysteria throws the police into a state of hyperactivity, desperate to find the killer and bring him to justice. As a result of increased police activity, this throws the crime underworld into a panic, since increased vigilance by the cops means that their nefarious activities are being disturbed. In short, it's bad for business. Thus, the crooks decide to take matters into their own hands and find the murderer themselves. That it takes criminals themselves to locate one of their own is itself a comment on the inefficiency and incompetence of the police. In the end, though both groups are working separately, a combination of efforts between the two finally locates Beckert. First apprehended by the crooks and subjected to a kangaroo court trial, the police eventually stumble across the proceedings, forcing the criminals to flee in terror.

Director Lang would eventually flee the country when the Nazis arrived, as would his newly-minted star Lorre---both of them had Jewish ancestry. Lang was famous for being extraordinarily difficult to work with, and upon arrival in Hollywood, he made many enemies. Prominent actors and actresses would often refuse to work with him, complicating casting for subsequent films. Lang's brutality towards his actors was well-documented. For example, in M, Lang threw Peter Lorre down a flight of stairs at least twelve times, one for each take. The intent was to make Lorre seemed frightened and utterly demoralized while being tried in front of the criminals. Lorre would become a major star in Hollywood, though when he arrived he could barely speak English. He was quickly typecast as a sinister villain, which is how he is best remembered to this day.

M is often considered an early film noir, though this is a bit of a stretch. Certainly the film was an influence upon subsequent filmmakers who made noir works, but this picture works first within the confines of the Expressionist school, while quite cleverly adding a crime drama element to it. Future directors would mine this same territory, particularly evident in the American obsession with gangster films during its own early sound era, but M is neither purely a Expressionist work or a Noir---it straddles the gap between the past and the future. What is clear is that Fritz Lang never bettered this film and that it remains a classic.
Posted by Comrade Kevin at 7:08 AM

thanks for the review - the only Lang film I am familiar with his Metropolis, so now I can add this one to my ever growing wish list of "must see".

This is a great film, and one of the first full sound flicks to really consciously use it well. I believe Hitchcock watched this one a few times.

(BTW, do you categorize your posts at all? It might be nice to label all your film reviews, songs, poems, etc. There was a point I went through all my old posts and did that, and it was a bit of a pain, but nice to have done.)