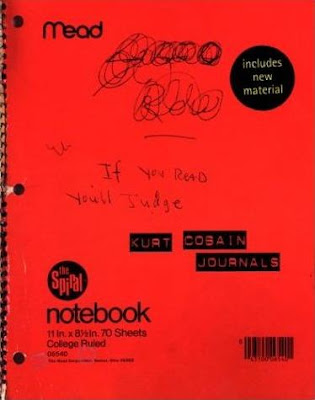 When I was coming up, it was fashionable to defend Kurt Cobain's shortcomings, much like a clinging girlfriend who knows her boyfriend is a loser but chooses to see his good side despite the substantial flaws. We bought hook, line, and sinker into a more or less uniformly romantic portrayal of a doomed rebel and tortured genius--a myth disseminated wholesale by a sympathetic music press and MTV news. Among the major mythologies advanced to excuse his untimely death by his own hand were the oft-cited revelations that chronic stomach pain (which a series of doctors had failed to treat sufficiently) were the major reasons for his heroin addiction and eventual death by suicide. Another strain of this sort of thinking asserts that his death by his own hand was a kind of noble sacrifice and statement to protest the soul-destroying aspects of mainstream success. Rather than take my place as another enabler and smitten adherent of the school of dysfunctional rock star, I'd rather comment on what I see as a deeply troubled human being.

Very much the autodidact, Cobain's journals are full of creative misspellings, future plans, handwritten letters to friends and record labels, fragments of stories unfinished, and outlines of songs and music videos. A high school dropout, Kurt Cobain never went to college and thus didn't possess the kind of educational polish which might have vastly improved his collection of rants and sarcastic bon mots. In many respects he was a slacker with a tremendous amount of unfulfilled potential. Still, potential aside, he had a shockingly immature side as well and an unhealthy infatuation with violence, bodily function, and toilet humor. While he decried materialism, consumerism, and mindless conformity with ample spleen in his writings and in his lyrics, many of his pronouncements were made in the terminology of an overgrown bratty seven-year-old boy with a potty mouth.

One expecting to find much in the way of finished thoughts or consistency need look elsewhere. The collection includes page after page of crude drawings, sloppy handwriting, occasional brilliance, mood swings, and frequent imperfection. Cobain could have badly used an editor or even considered editing his own material. As shown in the journals, his bare-bones, elliptical song lyrics were the only substantive efforts to undergo any real revision or more than cursory afterthought, with the exception of a few of his paintings or sketches. While reading through the sloppy, handwritten text, the image which sticks with me is that of a wiseass, lazy, frequently self-righteous, drug addicted loner in bad need of a shower, living in his aunt's attic. When one look at it this way, the mystique quickly evaporates and the real Kurt Cobain shines through.

What I was also struck with were the contrasts between the alternative scenes in the general same Seattle area at the time. Nirvana and other grunge bands had few similarities to the more politically active, chronically outraged, highly educated, young liberal riot girrl scene raging in the Pacific Northwest. Nirvana were much less self-consciously activist in their music and in their discourse, far too uncommitted, slothful, selfish, and destructive in general to have the discipline to advance any ideology. In this regard, they were more like malcontents griping about the right social ills with no real, sustained conviction aside from the fact they were against the status quo. The truth of the matter is that while constantly decrying the soulless nature of success, Kurt Cobain wanted to be huge, wished to make it, lusted after stardom, methodically planned his rise to fame, and attained it. The deepest irony of them all is that once he achieved his dreams, he couldn't handle the pressure and the demands.
Posted by Comrade Kevin at 6:00 AM