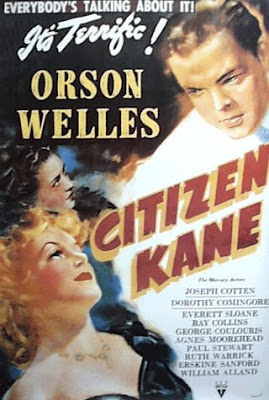 More ink has been spilled about Citizen Kane than any other film, so I won't try to top what has already been written. Orson Welles' masterpiece succeeds because it, in typically American fashion, synthesizes a variety of genres and cinematic styles together. All of the disparate forms in lighting, set design, audio recording, plot development, and almost every imaginable component which had come before it are skillfully combined. The final result deeply influenced the creation of film noir and a Hollywood fascination with mysteries for years afterward. Though William Randolph Hearst (upon whom the character of Kane is largely based) used his esteemable powers to keep the film from being widely shown, thus rendering it a box office disappointment, the end product was deeply influential to later filmmakers and then, fifteen years after its first run, hailed by critics and public alike as one of the greatest movies ever made.

Citizen Kane was shot with a relatively modest budget, and these days would have likely been brought to the attention of an audience as an independent film. Major studio films of the period were frequently lavish affairs full of expensive elements and eye candy, often at the expense of the narrative. The limitation of Kane are scarcely recognizably since Welles creative eye is so sharp that he uses every special effect available in the period to counter budget shortfalls. Not enough money to pay for thousands of extras to fill a Kane political rally? Welles uses a drawing still to serve the same effect. Not satisfied with the authenticity of the newsreel footage that introduces the audience to Charles Foster Kane? Welles has the sequence deliberately scuffed up by dragging it across a concrete floor. Unable to shoot a sequences in one exhaustive take? Welles shoots the film in two separate sections, then skillfully combines the two in the lab.

What I find particularly interesting are the camera techniques and lighting. Utilizing deep focus shots and extended takes required a judicious use of lighting. Unorthodox camera angles were used as well, sometimes shooting downward at the actors and actresses from a raised position, sometimes shooting upwards at the cast by a camera positioned on the floor. These unusual angles and lighting were deeply influenced by German Expressionism and the film that comes to mind is F.W. Murnau's Sunrise. Movies before had never created a metanarrative within themselves. Citizen Kane is one part detective story, one part cautionary fable, and two parts inventive narrative. Character development is not as refined as it would have been had the action not jumped back and forth between time. Almost all the screen time is devoted towards flashbacks from the point of view of the major characters, and that in itself was unheard of for the time. In large part due to Welles' background as a radio star, Citizen Kane is a radio play brought to life. Indeed, if the visuals were deliberately removed and only the audio were to remain, one could still easily follow the plot.

The film retains a kind of freshness that even today can be appreciated. Staid old Hollywood had been releasing one grandiose Technicolor epic and a million cookie-cutter genre pictures by the time of its release in 1941. Though its effects were not immediately felt upon the American film industry, it did influence many filmmakers to follow, and was often cited as evidence of the auteur theory of direction. Ironically, the results destroyed both Hearst and Welles. Hearst's waning influence weakened ever more fully, since the campaign to destroy Citizen Kane ultimately backfired in the end. Hearst's long-time mistress, actress Marion Davies, found herself unwittingly savaged as a talentless hack through her character in the film, Susan Alexander, which undeservedly destroyed her critical and commercial reputation in the process. For Welles, Citizen Kane was such a commercial failure that he was never able to create another film without massive studio interference.
Posted by Comrade Kevin at 6:59 AM

I went to film school here for several years. And Citizen Kane was, as you can imagine, one in canon of great films. But I never loved it. I never love Orson Well acting, or directing. But then I don't like the great classical composers like Beethoven. I think it pompous and ponderous, and self consciously dull. It's nowhere near my top 100 films.

I'm missing your posts from the treatment facility. Your complete freedom awes me. I have been reading every day, but sometimes you and I see the world so differently I refrain from commenting because I might sound rude. I choose not to go out and get to know my fellow man/woman, so your mingling, and your observations fascinate me. And when I am at odds with your conclusions, I try to hold my tongue. I'm old, I know the past. I know very little of the now, socially, artistically, musically. I have a very low social IQ. And since I know that my bipolar disorder might make me charming now and then, it also makes me "difficult." Men have used words like "prickly," when describing me.

I'll take you as you are, prickly or not. I'm a heavily opinionated person and as such I'm probably bound to raise someone's ire sometime.

Treatment posts I provide as soon as I have enough information to merit a lengthy description. Much of treatment is dull minutia or waiting for the latest reduction in meds or procedure to transpire.

For right now, I am merely having my medication slowly tapered down. Around the first of January I will start the infusions and likely have lots to talk about them, if I'm feeling well enough to do so, that is.

I used to isolate myself quite a bit until I came up here. Perhaps this is why I wish to be as socially active as I have been recently.

As for freedom, as I've said before, trips out are encouraged provided one feels up to it. I try to get out to wear myself out thoroughly during the day so I can sleep well at night.

Very sensible. Thank you for the reiteration of things I know recall from past posts. The old are so often say, Heh? Waddya say Sonny? Speak up. Funny that my memory seems so shaky, and I can love you with all I have and yet get mighty pissed when I come across a comment you make somewhere else about New Orleans and the Ninth Ward. I had to say little and leave. Because it's hard to stay mad at you and because we don't all have to agree. My social IQ is part of the problem--no siblings or cousins except on my dads side of the family--they lived far away and my two favorite died young. And so no family to actually love and yet fight with. And as I've said elsewhere I can be a fierce bitch. But when I really make you mad at me I'll hide out and hope it blows over. What a coward. It could quite honestly be said that I can dish it out but I can't ... you know the rest.

a humble request...(for anyone not allowing this post through--not spam--)

Anyone happen to know who Secret Dubai (the blogger: secretdubai.blogspot.com) is?