Saving Medicare from Ourselves 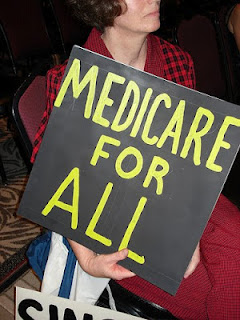 This time around, GOP politicians are running with the intention of eliminating waste and expense from Medicare. Should Romney be elected President, they will probably get their chance. If the former Massachusetts governor were to be elected, resistance to Health Care Reform might consume some of his first acts in office.

Should the Senate fall into Republican hands, the whole Congress now under GOP control, a floor vote would ensue. It would be held even if it only were for symbolic effect. Times have changed drastically. Three years ago, many Progressive Democrats believed that a single-payer system like Medicare was financially solvent, feasible, and ought to be extended to all American citizens

That didn’t happen, but now we're all waiting on the judgment of the Supreme Court. Assuming the Health Care Reform law as enacted doesn’t survive this court challenge, Medicare for all might be an option worth considering again. In 2012, many conservatives are on the record as stating that the so-called Obamacare program is flawed, expensive, and wasteful.

Its opposition strongly pushes back, stating that national coffers are not nearly as depleted as some believe. Moreover, too many people lack health insurance, which causes a ripple effect within the entire system. Economically, we are worse off if a significant portion of our citizens have no coverage. Democrats will fight to ensure that guaranteed coverage for all is a civil right for everyone, regardless of age, occupation, or lack of occupation.

For the past two years, I have been officially disabled and have relied on Medicare for primary coverage. After two years on disability, a person has to right to retain primary Medicaid coverage or switch to Medicare. I gladly switched to the latter because I believed my quality of care would improve. Medicaid has severely limited access to coverage. In some ways, I am very satisfied with Medicare, but there still have been significant shortcoming. Before the rest of the nation clamors for it, it must be dramatically reformed, but not scrapped.

If I were to give Medicare a letter grade, I’d award the program a B+. Medicare is, in the words of British screenwriter David Sherwin, "a nubile Cinderella: sparsely clad and much interfered with." The layers of bureaucracy involved with processing claims and paying out for services create very significant delays. I’ve noticed that, from start to finish, coverage is predicated upon the completing of several steps. Should any of these not be completed in sequence, coverage will be rejected outright. And what this also means is that it takes two to three times longer than a private carrier.

Finding a psychiatrist took four months of calling around and persistence. The first few calls were to offices who wouldn't take Medicaid at all and asked for $100 a session out of pocket. I couldn't pay that much. Eventually, I found a psychiatrist with a good reputation. He was the only available provider in the entire District of Columbia. This did require me to make a lengthy trip to his office. By bus, it can be upwards of an hour and half from my apartment. The hospital where he works is in the poorest part of town and has significantly less material resources than others in the District. Or, to put it another way, I am the only white patient in the waiting room.

I have confidence in the doctor and am satisfied with him. It is clear, however, that he aspires to eventually open his own office in a more affluent, safer part of town. If he does, I hope he’ll take my insurance. In some ways, it's odd to be under the care of a doctor not much older than myself. Someone old enough to be my parent probably wants to only take a gold standard private plan. In the meantime, I'll take what I can get.

I was formally diagnosed with sleep apnea last week. Three separate appointments with the sleep specialist have been scheduled and must be attended. Two appointments at a formal sleep studies clinic are also required. The CPAP machine I will eventually receive and use every night is not inexpensive. I have a need for the CPAP, which will regulate my breathing, but I’m still required to jump through an unnecessary number of steps to even receive it. It has taken four months to get here, and under a private plan it would have taken half the time.

We regulate government in ways we do not with private insurance. We hold government to a higher standard that we would never do for a private company. Though we complain about the government all the time, if it didn't matter, we wouldn't gripe as we do. Why don't we gripe about private companies? They seem to be the ones that cause us most of the problems.

Here's another example. As part of my Medicare Part D plan, a quick look at the formulary reveals volumes. Medications for erectile dysfunction or a benzodiazepine for anxiety simply will not be covered. The first medication is considered cosmetic. The second is flagged for its potential for abuse. I can see the logic about not covering plans that treat ED. However, being that benzos are mainline, basic treatments for people with anxiety disorders and PTSD, I'm afraid I fail to understand.

Hypocrisy is the reason for this stance, not ethics or morality. God forbid someone use tax dollars for those purposes. Imagine the numbers of outraged American calling for someone’s head should a person use government funds to maintance an erection or become addicted to tranquilizers. But know this: almost every single private plan will cover Viagra or Valium. If we really want to effectively monitor the behavior and habits of government, we first need to prosecute the politicians who embezzle thousands of dollars. Leave average people alone.

I can understand why Seniors who do use Medicare, Mitt Romney excluded, will buy private plans to supplement their Medicare coverage. The period of time under which a recipient is in the “donut hole” requires 100% out-of-pocket coverage. Primary coverage quickly gives way to an expensive period of significant cost. The money to pay for it has to come from somewhere. Whether it be savings or a small nest egg, the donut hole provides a temporary, but expensive economic squeeze.

Making things worse is the out-of-pocket cost of each medication. What one pays out of pocket is a matter of luck and a result of the severity of illness. If I took two medications that were generic and reasonably priced, I might be able to manage. Sadly, I take seven medications now. One of them costs $1,200 for a 30 day supply. I simply couldn’t afford it if I didn’t have additional assistance in the form of a low-income subsidy.

To have Medicare for all, we must first eliminate layer after layer of needless rules and regulations. To me, the basic system is sound, but many laws have been enacted, each foisted upon the other. Policy needs to reflect the daily lives of recipients, not formulas and number crunching.We don’t need a whole industry around government care. Nor do we need the lawyers who often make their careers by needlessly complicating the system. New jobs need to grow in different sectors. Some would rather keep the system frozen and backed up, and for absolutely no good reason

Posted by Comrade Kevin at 9:26 AM