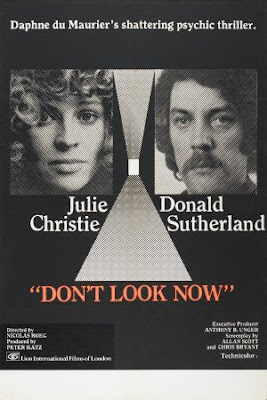 The British film Don’t Look Now, originally released in 1973, was best known at its time of release for a shockingly frank sex scene. There is much more to the effort beyond a five minute diversion, but sometimes Puritanism speaks louder that artistry. Even today, its depiction of oral sex could still be considered graphic. Oddly enough, this passage was improvised on the spot as means of counterbalancing the dark, dismal, menacing tone present in the rest of the film. Passing the censors only by way of a cleverly fractured editing job, the scene nevertheless relies more on suggestion than salaciousness.

This does not, of course, mean that viewers can’t piece together what is really happening on screen. A jealous Warren Beatty even demanded its complete excision because of the involvement of female lead Julie Christie, then his girlfriend. Director Nicholas Roeg ignored the threat. Rumor had it that Christie and Donald Sutherland, her on-stage husband, had not faked their love-making. There remains some lasting controversy as to whether the sex scene was simulated or unsimulated, even now. Fortunately for film-goers, one scene does not a movie make.

Though constructed on its face like a Gothic horror tale, the film is really about the grieving process. Specifically, we mean the psychological impact of grief that follows the death of a child. Two parents, one American, one British, lose a child. Her name is Christine, and though her physical death occurs in the first few frames of the work, her presence will feature prominently throughout the rest of the movie.

She perishes due to accidental drowning, a complex mixture of camera work that resembles Psycho's infamous shower scene. The tragedy occurs at the family's English country estate, necessitating an abrupt change of scenery. Some months following the funeral and all other necessary arrangements, the husband, John Baxter (Donald Sutherland), agrees to help restore an ancient church in Venice. His wife, Sharon Williams (Julie Christie), comes along for a badly needed distraction. Venice seems like the right thing to do at the time, though they find that their problems arrive along with them.

Both are still shaken from the experience, seeking explanation for the unexplained and inexplicable. Sharon finds comfort in the company of two sisters, one of whom is a psychic. For all her perception into the spirit world, the clairvoyant lacks eyesight and requires constant assistance to move from place to place in the material world. Encountering the blind medium by happenstance at a restaurant, Sharon recognizes the truth that the elderly prophet has presciently revealed. It makes a profound impact upon a mother yet to fully come to terms with her daughter's demise. Stopping temporarily at an ornate Catholic Church, Sharon decides to lights a few candles in her child’s memory.

Her husband is skeptical, inclined to bury himself in his work rather than seek answers. He himself holds a barely acknowledged gift of psychic perception that he is only beginning to understand. While Sharon requires the skills of a medium to communicate beyond this life, John’s second sense provides periodic, but perplexing clues. However, his refusal to explore this gift beyond the superficial casts him further and further into denial. With time, his visions grow increasingly more and more disturbing, making them impossible to ignore. Christine, his daughter, died while wearing a red mackintosh. Its precise shade pops up time and time again at odd moments throughout, introducing a potent, reoccurring color symbolism. This motif is present through the rest of the running time.

In a film which draws a distinction between belief in the wholly knowable and the thoroughly unknowable, Don’t Look Now shows organized religion in a favorable light. Bishop Barbarrigo (Massimo Serato) is a humble, devout man who provides helpful council to John Baxter. The Bishop also feels the same malevolent, unsettling visions as John Baxter, though neither man discusses them with the other. A serial killer is on the prowl in Venice, and both men can somehow channel an identical sense of macabre foreboding. To Baxter, this extrapolation takes the visual form of Christine in her last moments on Earth.

To the sightless woman that Sharon continues to visit, powers like these are divinely inspired, and nothing to be trifled with in the least bit. In this world, women are the most perceptible and most highly attuned sex. Even two men with a significant sixth sense pale in comparison to the intuition of the women that surround them. In the atmosphere of a psychological thriller like this one, ESP is as much a hindrance as a help. What is viewed first as a skill quickly becomes a liability. Characters are eventually destroyed by these mysterious forces, though in the beginning they hold great promise. The pursuit of the supernatural only backfires in the end.

Technically speaking, a novel approach to editing keeps the viewer consistently off-balance. Choppy, multi-angle shots seem quaint in this day and age, but were unusual for the early 1970’s. Today’s pacing and jump-cuts have increased the tempo and the procession of images. Classified as a horror film in its time, works of the genre today feature hyperactive cutting, increased gore, and constant psychological terror. In line with a Hitchcock film, Don’t Look Now allows the tension on-screen to build to a few salient moments of agony and fear. If released now, it would be categorized primarily as a drama.

Though an enjoyable film, director Roeg’s self-professed “exercise in film grammar” sometimes overshadows plot development. A truly robust and sufficient study of grief would place more of an emphasis upon character, and less upon spooky ambiance, no matter how creatively rendered. Some films demand that their audience silently collect visual clues to patch together a comprehensible narrative. This scavenger hunt aspect can alienate viewers just as much as it attracts them.

Modern viewers will either love the film or find it somewhat tedious. Nevertheless, the movie is an excellent example pulled from the most critically acclaimed period of British horror. Don’t Look Now is much in line with the cult classic The Wicker Man, released the very same year. These days, this cinematic work may be more important for how thoroughly it influenced the current generation of British film directors. For most viewers, it has become a footnote in a bygone era.
Posted by Comrade Kevin at 9:38 AM