No Media Circuses Needed with the Trayvon Martin Case 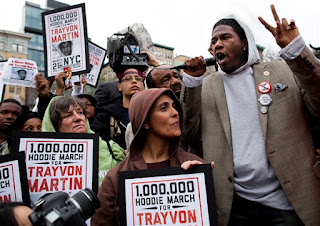 Regular readers no doubt are aware that I grew up in Birmingham, Alabama. As much as I’d like to escape that fact sometimes, I can’t help being defined by it from time to time. It is this distinction, above all others, is why I have not wanted to write about the Trayvon Martin case until today. Birmingham has come to represent a defiant, violent response to a movement that bravely confronted the worst that bigotry had to throw at it. The visual images produced by the Birmingham campaign were so ghastly that they formally unified the movement. They also began to influence popular opinion of whites across the country and the world. In some ways, it is hard to believe that those troubled times will mark their fiftieth anniversary in May of next year.

The most gruesome images, those of fire hoses and police dogs are sometimes presented without the full and necessary context. Rarely mentioned now is that many of the demonstrators were Trayvon Martin’s age. The city where I came of­­­ age has never completely been able to let go of the troublesome legacy of Civil Rights, and what it cannot excuse it buries. Though it may win me few friends to say this, decades and decades after the newsreels and inhumanity, blacks and whites today shoulder an equal burden. Black politicians have played the race card to win elections, just as their white counterparts have appealed to racial stereotypes to manipulate their own constituents. Truth would benefit everyone most.

Now that I live in Washington, DC, I have been enjoying what has been a four-year-long change of­ scenery. Substantial problems are present here, too. The dysfunction in Washington, DC, is of a very different distillation. Instead of an omnipresent threat of racial tension, I contend with the tension of bipartisan pettiness. Without meaning to sound cynical, the contrast is refreshing. Instead of those of different races and racial identities shouting at each other, I observe instead the bluest of the blue fighting with the reddest of the red.

With a racial conflagration brewing, I know I am back to very familiar territory. Already a cause célèbre, one only to grow with time, this showdown reveals my chronic weariness of racial polarization. If I felt we were making progress towards racial toleration and understanding, I might concede to one more go round, one more game of pitch and catch. How many more are to follow, friends? Is this how progress is made, even with a billion hurled accusations?

I recall a particularly pertinent segment of President Obama’s speech on race, given a little more than four years ago. Our President likely could have a son who looks just like Trayvon, but I know he is wise enough to keep from resorting to cheap stereotyping.

For the African-American community, that path means embracing the burdens of our past without becoming victims of our past. It means continuing to insist on a full measure of justice in every aspect of American life. But it also means binding our particular grievances - for better health care, and better schools, and better jobs - to the larger aspirations of all Americans -- the white woman struggling to break the glass ceiling, the white man whose been laid off, the immigrant trying to feed his family. And it means taking full responsibility for own lives - by demanding more from our fathers, and spending more time with our children, and reading to them, and teaching them that while they may face challenges and discrimination in their own lives, they must never succumb to despair or cynicism; they must always believe that they can write their own destiny.


Once more, while the attention of our nation focuses on one specific instance of injustice and original sin, as Obama termed it, I file my own protest. Again? Do we have to do this again, really? Those who wish to hold signs aloft and chant slogans with me are more than welcome. If I could be assured that passions will not spill out of control on both sides, I would not feel this way. I have, you see, read this tired old script a few dozen times before and it always ends the same way. Regardless of outcome, public opinion breaks along color lines. Prejudice always frustrates truth and stereotype wins out, regardless of resolution. Recent opinion polling backs this up.

Thus far, the shouting and agitating has been largely limited to a few activists here and there. Now, with the filing of formal charges against George Zimmerman, we’ll see how far the media and the American public ratchet up the intensity and anger. I know better than to try to predict how much of a story this will become or not become. Swift resolution is my fervent prayer, namely that justice might be served and the real story of what happened be revealed. In cases with a profound racial tint, such as these, I withhold judgment until all the facts have been laid out upon the table. Of course, I have my own bias, but bias is what I’m out to avoid.

Jumping to conclusions has made a fool out of me on numerous occasions. During the Duke Lacrosse Rape case, for example, I cast my lot with the prosecution. I supported the black woman who claimed to have been raped by wealthy college-aged white men.  Many people who I knew were pushing for conviction, even before a coherent narrative had been brought before the jury. In polarized matters like these, the memory of past offenses and criminal proceedings that never came to trial influences opinion. African-Americans have been victims of racially motivated crimes multiple times. And even though we know this, every case should still be taken one at a time.

By the end of the proceedings, where the Duke players were exonerated of all charges, if you’ll recall, the US prosecutor assigned to the case was eventually disbarred for ethics violations. He wanted a conviction desperately, to the degree that he was willing to falsify evidence. When the case unraveled, I, like many, had egg on my face. To avoid the same, I’ll avoid overreaching, even if my opinion is eventually proven factual.

Until I know more information, I believe that George Zimmerman is innocent until proven guilty.

Whether Trayvon Martin is vindicated or not we may all be the losers in this charade. The words of the Native American leader Chief Joseph speak for me. They are sad, poignant, and weary, the public discourse of the broken hearted. This battle royal will not have me as a participant. Hear me, my chiefs. I am tired. My heart is sick and sad. From where the sun now stands, I will fight no more forever.
Posted by Comrade Kevin at 8:58 AM