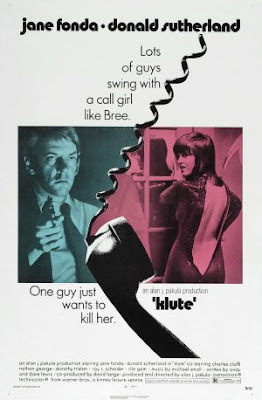 1971’s Klute was released alongside considerable controversy. Leading lady Jane Fonda had been outspoken on behalf of perceived radical causes. The next year, she starred in a propaganda film by the Communist North Vietnamese, a decision that would forever win her the derisive nickname of Hanoi Jane. At the same time, this film established her as a feminist icon, in the height of the second-wave era of Ms. Magazine and Gloria Steinhem. Director Alan J. Pakula’s second directorial effort was his first to embrace a malevolent, shadowy world of paranoia and conspiracy. Two more movies along the same lines would surface by the end of the decade.

John Klute (Donald Sutherland) is a small-town private detective seeking his best friend, Tom Gruneman, a Pennsylvania executive. Gruneman is feared dead, having disappeared without a trace around a year before. Klute’s searches and inquiries put him in contact with Bree Daniel (Fonda), a New York City escort. Despite his humble roots, Klute’s persistence begins to pay off as a formerly cold case begins to slowly unravel. Sutherland plays Klute as the very definition of the strong, silent type.

Fonda’s portrayal of a streetwise, formerly high-end call girl won her an Oscar for Best Actress. Though a sympathetic rendering of a burned-out sex worker with larger ambitions, it is difficult to suspend disbelief from time to time. A woman in these circumstances would mostly likely have solidly working class pretensions, and Bree Daniels (Fonda) is a little too bourgeoisie to be believed. Now consumed with the desire for self-improvement, Bree might well have once attended college at an Ivy League school.

In this role, Fonda’s role is more Brechtian than naturalistic. We know she is acting and don’t care. It is the skill of an actress who has smartly studied her part that appeals most to viewers. Technique aside, it is nevertheless laudable, even groundbreaking that the character of Daniel humanizes what is still often a stigmatized and demonized profession. Her character manages to keep her head above water in a world of drug addiction and general dysfunction.

Perhaps a strictly literal presentation is not intended. Bree Daniel is on some level meant to stand in for every woman, as she finds her freedom consistently compromised by the complications of a man’s world. Her enthusiasm for turning tricks has waned considerably; she now charges her johns a fourth of what she did even a year before.

She’d rather be an actress for the stage, but finds the competition heavy in a city already over-saturated with aspiring thespians. Even the parts for television modeling commercials are competitive and impossible to attain. Bree seeks to reform herself, but finds herself stuck in the meantime as a successful sex worker but unsuccessful actress.

An early scene shows a star in decline. No longer able to financially afford therapy, Bree spends her last session lamenting her attraction to the world’s oldest profession, weary of the demands of the job. The female psychologist questions whether Bree really believed that she’d be completely cured of the compulsion to trick while in her care. It is control that Fonda’s character wants most, the kind of control over her own destiny that is so seldom afforded elsewhere. The presence of danger represented by a killer at large strips aside her cocky veneer.

Klute is more concerned with allegorically exploring the psychological currents of the early 1970’s. Beyond women’s rights are hidden, frighting source of violence and coercion, both of which were an omnipresent part of the late Sixties into the early Seventies. That this most looming threat is not spelled out directly and alluded to darkly only accentuates the fear of the viewer. It should be said that as a textbook thriller, Klute sometimes promises more than it provides. One must first accept Pakula’s quirky worldview, then proceed from there.
Posted by Comrade Kevin at 6:55 AM