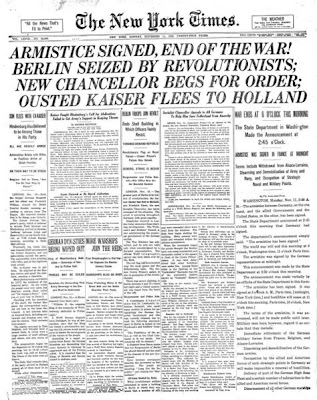 Today is formerly named Veteran's Day, but the Eleventh day of the Eleventh Month was originally designed to commemorate the end of the first catastrophic, widely sweeping conflict of the modern era: World War I. The Central Powers and the Allied powers agreed to stop fighting at the eleventh hour of the eleventh of November, concluding what had been four years of mechanized slaughter, the likes of which had never been seen before in the field of battle. Eight million died, methodically and chillingly killed by advanced weaponry: machine guns, poison gas, long range artillery, and tanks. The first total war of the modern era, World War I destroyed the economies and emptied the coffers of many Western European countries---in blowing each other sky high, each proved to be its own undoing.

Though seldom remembered these days, I think it would do us well to give pause today to that conflict. World War I drew a second-rate, reluctant, isolationist nation into the life-or-death struggles of Europe. While the major nations of the world emerged from the protracted, bloody conflict decidedly worse for wear, America gained a toehold and an industrial base that would within the next two to three decades make it the most powerful nation on the face of the earth. As the former world players crumbled, we took supreme advantage. It would take another World War to firmly establish the United States of America as a superpower, but the seeds of that assumption of authority would be planted immediately after what at the time was dubbed The Great War.

The aftermath of the conflict spawned the Lost Generation, a compendium of writers, artists, musicians, and bohemians with a sour, pessimistic outlook. Having experienced the horror of war and its impact on the soldier and civilian alike, they threw romanticism and optimism aside in forming their own conception of a fallen world. Wishing to forget the visceral and emotional toil of World War I, artists and regular people alike embraced a new era of loosened mores and permissiveness---which would last for a decade until the Great Depression thrust the entire world into a period of intense poverty it would take another World War to eviscerate, though some nations emerged from that war in much worse shape than they had during the previous one.

Do remember today those who gave their lives or at minimum their sanity in war, but don't forget the lessons of 1918, either. Though I am a Quaker and officially opposed to warfare of any kind, on Armistice Day day I take a moment to acknowledge the huge toil of the battle and how it punishes everyone: soldier, wife, husband, sister, brother, mother, father, son, daughter, uncle, aunt, grandmother, grandfather, friend---alike.
Posted by Comrade Kevin at 6:55 AM

Well said. I think a lot of people just ignore the Great War, as they called it then, since they didn't know it was only going to be World War I.