Readership, I found this yesterday on Blue Gal's page, so those of you who have been to her site might find this a bit extraneous. I wanted to add my own two cents.

Apparently the fine folks at WalMart want our young teenage girls to never forget this. 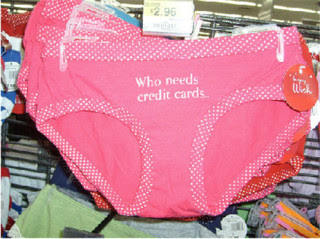 This is wrong on so many levels. I don't know where to begin. This would be not nearly as offensive on a t-shirt or a wallet, but on a pair of panties clearly designed for TWELVE TO SIXTEEN YEAR OLD GIRLS this suggests something absolutely appalling. It's still wrong no matter how old the women in question happen to be. The age thing just adds an even more sinister edge to it. Nothing like the suggestion of underage girls selling their intimate areas for cash, but certainly not plastic.

I discussed this with a friend of mine who lives in Australia. She wrote this in response.

I have a hard time finding decent clothes for my seven year old girl. she's seven! She does not need midriff baring tops, tops with slogans on them, skirts that are ridiculously short. not just short skirts but RIDICULOUSLY short. Items promoting all sorts of fucked up shit. I get so mad about this.


But then again, no one said WalMart had good taste. This shirt was recently featured on the racks as well. What's next? "Some say it's rape, I call it hot sex"? Or: "Some call it domestic violence, I say I'm just teaching her a lesson"?

While you're there you can also pick up my personal favorite, Bratz dolls. These are some of the tamer variety. I wasn't able to find the ones that look like 100% harlot. 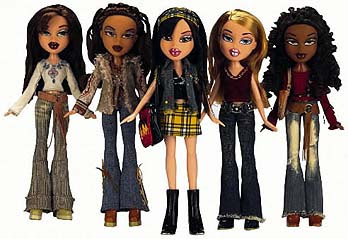 Not that the name itself isn't appalling enough. These dolls, clearly designed for the tween, early teen set wear short, midriff revealing clothing, globs of makeup, and apparently delight in looking like borderline prostitutes. What a great example for impressionable young girls to aspire to be! Don't worry about being reasonable or unselfish, girls, because remember it's all about you and how good you look in front of the boys!

Let's not also forget the thong for Preteen girls. This item speaks for itself.

Random Factoid: 90% of all people shop at WalMart.

I am also part of that 10% who does not shop at Walmart. I used to but after seeing the fucked up shit that they have and the fact that when I was a one-on-one attendant for a young man in high school who got a job at Walmart and saw their training practices and videos they subjected employees to, I quit shopping there.