Fallout from the Bhutto Assassination 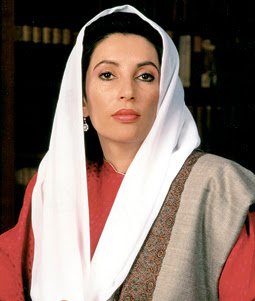 Upon hearing about tragic circumstances like this, I often reach the same inevitable conclusion. After the moral indignation subsides, after my theorizing as to the identity of the parties responsible for the killing concludes, after my often-justified wary suspicion of widespread international ulterior motive arrives at a practical, rather than emotional resolution, after I take deep breaths and calm down, what I am is often left with is a renewed realization of how fortunate we Americans are.

Indeed, we are very lucky to live in a country where overt and shocking acts of violence like these are still relatively rare. Say what you will about the rising level of violence in this nation, the latest school shooting, or the latest human with untreated mental illness who opens fire in the middle a crowded group of people. When public violence occurs on these shores, one can be sure it will be proclaimed in screaming headlines and then exhaustively analyzed by talking heads. Rest assured if events like these were not newsworthy, no media outlet would find them worthy of bringing to our attention. The reality of violence in other parts of the world, particularly the Middle East and Africa, to cite two key examples, is a sadly more prosaic affair.

The brutality of the killing might give us all reason to pause. Not content to simply take her life by gunfire, the assassin detonated a bomb to seal the gruesome deal. The bombing yesterday succeeded not only in taking her life but also ending the the lives of several bystanders in the process. Nor did it lack precedent. As it has been extensively noted, she had recently dodged several similar threats on her life. Though I am filled with many strong emotions, I cannot say that surprise is one of them.

Rest assured, I'm not going to attempt to add some new dialogue to this debate. Others have done a much more admirable job of it over the past two days. I don't have any new pet theory, or web of conspiracy contribution. Yet, I would like to add some perspective.

We on the left often are criticized for being America haters, calling into account our patriotism and devotion. Those who levy such accusations might do well to realize that there is a difference, and a rather large one at that between constructive criticism motivated by righteous outrage and, on the other hand, destructive vitriol designed purely to destroy. Let it be known that I love this country, though I must admit I rarely like it. How could I, owing to the fact that I strongly believe it is on the wrong course? I'm not sure how any sane person could conceivable like seven years, going on eight of gross misuse of power. I'm not sure how anyone could like a war justified by false pretenses and lies. I'm not sure how anyone could like soaring energy costs and a slowing economy. Furthermore, the hypocrisy of the patriotism argument is rather telling, since I've never seen anyone on the right refrain from bitching up a storm when their agenda is being overlooked.

A motivation in writing this post is to directly address those who say leftists never have anything positive to say about America. They do have a point, albeit one they likely never intended, nor implied. It would do us all well to occasionally acknowledge the good things about our country, if only for our own sanity. However, it cannot be ignored that do we have our work cut out for us, particularly when we consider the vast need for reform that exists in the world.
Posted by Comrade Kevin at 11:10 AM