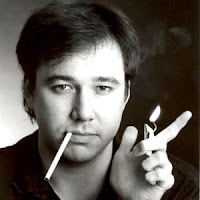 Bill Hicks would have been forty-six today.

A singular talent who passed away in relative obscurity before he reached the age of thirty-five, Hicks' uncompromising, unflinching style and simultaneous disdain of the trappings of fame ensured that he remained widely unknown during his lifetime. Better known in the UK than in his native America, he was nonetheless adored on both shores by an appreciative cult audience who immediately took to his acid-tipped satire. Hicks deliberately shunned widespread fame by refusing to lend his name or image to endorse any product and actively incorporated anti-consumerist rhetoric into his fiery routines.

His rants reveal a keen grasp of human nature, particularly in its darker elements. Typical targets include the soullessness of mainstream culture, the evil of marketing and advertising, and the exploitive power of religious hypocrisy. Yet, in spite of the raw anger inherent in his standup, his basic message remained that of transcendence-- as he frequently reminded audiences, "The truth will set you free."

Since his 1994 death from pancreatic cancer, the legend of Bill Hicks has grown by leaps and bounds and the ranks of his admirers swells every more with the passage of time. His often-philosophical routines cater particularly to a demographic of disaffected, malcontented liberals, particularly the so-called angry young men of the left, who see in him an effective anti-hero prophet. It's easy to see why. His views reflect those of the chronically misunderstood and disenfranchised. Raised Southern Baptist in Texas, he left behind his conservative upbringing and spoke darkly and critically of the unthinking masses, their superstitions, and their failings.

Like most visionaries, his words seem ever more applicable with time. One wonders what he would have to say about our current state of affairs.

Fans have put together a MySpace Music page which features some of his best routines. Check it out if you're curious. See the below video for Hicks in action.

Posted by Comrade Kevin at 1:10 PM