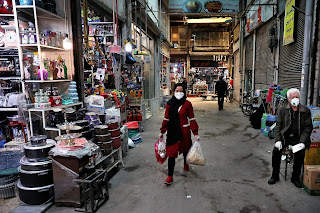 Current events have been an enigma to me since forever. Keeping track of them is like trying to grab handfuls of flies. It’s a waste of time. The devils fly through the gaps of your fingers, rendering your action moot. But that’s until current events become current for you, too. One of my doctors is Iranian, Persian really, but has been called back for a month for home. These are not Pro-American times in Iran, and the unrest I read about makes me wonder if she is on some imperative family errand. I wonder if her papers will be denied to her somehow, preventing her return. My worries go beyond finding another doctor.


Until now, as I have gathered, the crackdown has been mostly on the media. The regime doesn’t want publication of what it is doing by any means. My doctor is part of the group who left because of the Revolution in 1979, making this trip seem mysterious, to say the least. She is also my age, which at 35 is possible, but makes me know I am growing into an older adult. Most Persians loyal to the Shah went to California, but some of them migrated to this greater Washington, DC, area. And yet she is working on her English.

I could speculate about this topic and be no further along. She said she had no choice in the matter, which is a curious reason to cite. It speaks of intrigue but may not really say much in the long term. I’ve never had a doctor need to flee the coop with such urgency and at the last minute. Last minute decisions are rarely made with positive consequences, or even expecting them.

Maybe one of her relatives has gotten wrapped up in this mess. I’m not sure I’d feel safe as an American in Tehran right now. Death to America is once again the chat of the hour. Has it ever stopped, really? I find it hard to not want death and destruction for them, if they hate us so much. As I’ve written before, it tries my pacifism. I don’t want to surrender to what I see often as bullies.

They’ve taken away someone who provides an essential service to me. I’m not sure she will be allowed to return. I don’t think she is the source of the problem, but it is someone or something dear to her. I can pick up that much from the way she apologized for this arrangement, completely off-balance, wobbling, teetering slightly. It’s somewhat unprofessional, but forgivable.

We’re trying to keep nuclear material out of the hands of a dictatorial power. How we do it is a matter of debate. But in the meantime the people suffer as the dictators profit from the hatred they fan. And how do we break that resolve? It makes the Soviets seem meek and mild by contrast, and as someone who values my own religious freedom, it’s a temptation to say that this religion is neither free, nor religious. It’s an ideology of terror justified by blood sacrifice.

These are our current events, should we choose to accept them. This is what makes people run home out of haste. And how we deal with it is everyone’s choice.
Posted by Comrade Kevin at 1:09 PM

Good news this is to everyone out there with different health challenges, as I know there are still a lot of people suffering from different health issues and are therefore looking for solutions. I bring you Good news. There is a man called Dr Emmanuel  a herbal practitioner who helped cure me from HSV (2), i had suffered from this diseases for the past 5 years and i have spent so much money trying to survive from it. I got my healing by taking the herbal medicine Dr Emmanuel sent to me to drink for about 14 days . 3 days after completion of the dosage, I went for a medical checkup and I was tested free from HSV. all thanks to God for leading me to Dr Emmanuel who was able to cure me completely from this deadly diseases, I’m sharing this so that other people can know of this great healer called Dr Emmanuel because I got to know him through elizabeth who he cured from HIV. I was made to understand that he can cure several other deadly diseases and infections. Don’t die in ignorance or silent and don’t let that illness take your life. Contact Dr Emmanuel through his email traditionalherbalhealingcentre@gmail.com You can also whatsapp/call him on:+2348140033827 .He cure all forms of disease {1}HIV/AIDS {2}DIABETES {3}EPILEPSY {4} BLOOD CANCER {5} HPV {6} BRAIN TUMOR {7} HEPATITIS {8}COPD{9} SICKLE AND ANAEMIA.etc Be kind enough to share as you received.