Aging Gracefully in Rock: From Lennon to Phair

Ed. note: This post was originally written in September of 2019. 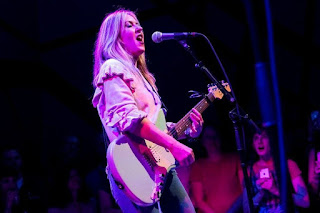 As I write this, I am reminded of John Lennon’s final album, Double Fantasy. While I largely dislike the album’s contents, I am struck with the overarching theme of the effort, which is the tale of a person growing into middle age gracefully. I will soon be 40 myself, and yet I’m somehow not panicking about it. I seriously doubt I’ll have a massive middle-aged crisis, as I always have been something of an old soul. To follow are some of the lyrics of Lennon’s song “Borrowed Time.”

On Friday night, I saw the indie rocker Liz Phair live. Her seminal album, Exile in Guyville, celebrates its twenty-fifth anniversary this year, thrilling the hearts of those who remember a time where my generation’s music seemed incapable of making a misstep, each newly released album building upon the one that came before it. The death of the party probably ended when Nirvana frontman Kurt Cobain committed suicide one tragic April day. I remember the weather being appropriately gloomy and overcast. What was to follow was the end of a scene that began so promisingly. What came next was a slow, but nonetheless inevitable slide from great music to mediocre one-hit-wonder copycats.

I paid the extra money for a VIP ticket, allowing me backstage access to Phair and her band, an talented outfit who are conspicuously a full generation younger than their frontwoman and all male. Phair still radiates youth and beauty, even at 51. Exile was one of the first albums I ever bought. It was purchased with money I stole from my parents, something I say half-smiling, half-grimacing. When everyone was listening to the Spin Doctors and Eric Clapton Unplugged, my interests strayed from the mainstream.

When I met her, I mentioned this bon mot. Responding to what I said, she asked whether I had ever told my parents about my misdeed, and when I indicated that I had, Phair asked me if they were cool with it.

“Not at all”, I said. Phair next shared a brief anecdote about how, before she’d made it, she sold self-recorded cassette tapes of her music at gigs. She noted that people often paid with spare change. This was a means of saying I probably wasn’t the only one who resorted to petty thievery to obtain her merchandise for sale.

The audience was a strange blend of humanity. It included aging hipsters with prominent crow’s feet, gay male couples, lesbian couples, and people who behaved and acted like they hadn’t been to a show in quite a while. I will admit that I was one of them. When I was younger, I stood at attention for hours at a time and reaped no negative consequences. Now my back still hurts, but I say resolutely that it was worth it.

Liz Phair’s tour is scaled down, playing some small clubs this time around, yet she is playing larger venues in big cities. Speaking of the smaller clubs, a lesser artist with a bigger ego might see this as being knocked down a peg. However, last we saw her, she was opening for fellow 90’s throwbacks Smashing Pumpkins. The opening act, like the bass player, never gets much love. Now she plays on her own terms, and seems satisfied with the results. Phair knows that she will never scale the heights she once did, but so what? Her riotous early days are long gone. As rock Mom, she noted in a recent interview that her foremost concern now is learning how to grab the attention of a distant son.

Returning to the greater topic at hand, Phair’s first album features her strongest material, and so during the show she only deviated a few times to later efforts on subsequent albums. This was to the delight of the audience, and especially so to the (mostly) women who sang the lyrics to every song. Phair, too, was in good spirits and spoke to the crowd multiple times throughout the night. She made the bold gesture of opening with the still-shockingly sexual “Flower”, which has yet to lose its ability to raise eyebrows, all these years later.

A more critical eye might say that Phair was on a nostalgia tour, and little else, but with material that strong coming out of the gate, she could hardly be faulted for the decision. She played for a little over an hour and a half, with one encore for good measure. And then everyone scattered for the turnstiles, some of them young enough to hit the bar scene, some of us headed home, out way past our bedtimes.
Posted by Comrade Kevin at 3:35 PM